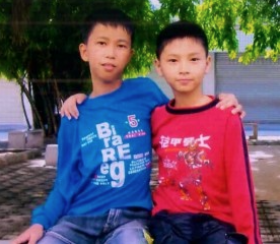 You may not realize it but there is much power in pressing the share button when it comes to adoption advocacy.  The timing may not be right for you but there might be someone on the other side of that 'share' where the timing is just perfect.

Last summer we asked our community to share the story of two brothers who were at risk of being separated because the elder of the two was aging out, and share you did! This is a beautiful follow-up to the response from our wonderful advocacy community.

As you read this, remember, children's lives change for the good when you choose to click the share button.

Three years ago, two young Chinese boys, now named Gabriel and Zachary, only age 7 and 11 suddenly found themselves without any relatives alive to take care of them. A few months earlier, both parents had died. The village they lived in helped them with the cremation, but then they were left to tend to themselves.

After walking to another nearby village, Gabriel and Zachary were picked up by the police. They were soon placed in an orphanage, where they remained until February of this year.

In July of 2015, Karla Baca saw the boys listed on an urgent notice that was stressing the importance of the siblings getting adopted immediately. Since Gabriel was just a few months away from turning 14, the boys faced the risk of being separated permanently, as Chinese regulations state that children 14 and older cannot be adopted. Even though the orphanage would have allowed Gabriel to stay there a while longer, only Zachary would still have been eligible for adoption.

It was a race against the clock and compassion for the boys tugged at Baca’s heart.

After talking with her husband, Ted, she said they both knew they had to at least give it a try.

“(The boys) already had three things working against them; their age, that they are boys and are siblings,” she said. “It’s harder to get someone to adopt two older boys.”

On Feb. 19, Ted traveled to China to pick up Gabriel and Zachary and the adoption was finalized a few days later. Once the boys’ immigration papers were in order with the U.S. Consulate, the three finally made the journey to the U.S., and arrived on American soil March 5 — one day before Gabriel turned 14.

Baca said they celebrated his birthday with just the immediate family.

“They are really sweet boys,” she said.

Baca said that when someone adopts internationally, the adoptive parents typically don’t get to see the child(ren) before they have committed to adopt. As a result, there is often a worry accompanied about how it will work out, because of the horror stories that have been told of instances where it didn’t end well, she said.

“But you just got to have faith,” she said. “I cannot imagine a better situation than to have these boys and how well they fit in with the family.” Baca said Gabriel and Zachary are very helpful, have a good sense of humor and are also able to laugh at themselves whenever they make a mistake. Right now, she’s working with them to learn English. While simpler communication works well, a translating app on Baca’s cellphone comes in handy many times, as well.

Baca said she is glad that she and Ted pursued adopting Gabriel and Zachary even though their circumstances at the time were not ideal for adoption, since they didn’t have all of the money going forward.

“Things can be difficult, but it doesn’t mean that you don’t do them,” she said. “You do what’s right no matter what, whether it’s difficult or easy.”

Adopting internationally was nothing new to the family. The couple had already adopted 2-year-old children, Josy and Sanjay, from India in 2003.

“Often they aren’t able to get the medical treatment they need in developing countries,” said Baca.

Tragically, Sanjay passed away Feb. 25, 2011, due to a rare brain bleed he developed while he was in the hospital to receive a bone marrow transplant. Baca said a transplant like that can cure Thalassemia Major and the person affected by it will then no longer need to receive regular blood transfusions. In part because of the outcome for Sanjay and the fact that Josy doesn’t have any known relatives that would be a compatible donor, having Josy have a bone marrow transplant is a chance the Bacas are not willing to take.

Baca said when Gabriel and Zachary learned of Josy’s medical condition they said they want to find a cure for her.

Gabriel said he wants to be an engineer/inventor when he gets older and Zachary has his heart set on becoming a scientist. They are both technically inclined, said Baca.

“When our toaster broke, they just took it all apart, figured out what was wrong with it and fixed it,” said Baca.

In another instance, one of their brand-new Nerf guns quit working almost immediately. Zachary then dissembled the broken gun as well as one that was working, compared the two to figure out what was wrong with it and then just fixed it.

“I was telling him how proud I was of him for figuring it out and fixing it when Gabriel came up to me and wondered why I was saying that,” said Baca. “He didn’t understand what the big deal was and said ‘That’s what Chinese children do. We fix things when they are broken.’”

Faith is a central part in the family’s life. Baca said she believes God meant for them to adopt internationally, as whenever they got prepared to foster and adopt within the U.S., they were halted from doing so for various reasons. One of those reasons being that Ted, who was in the Army at the time was deployed to Afghanistan shortly after 9/11, despite that they had already gone through the necessary programs and steps. Ted retired from the Army shortly thereafter.

Baca and her husband also have two children by birth, Max and Cheyenne.

Baca said their son Max is a special needs child and has something that is somewhat similar to Down Syndrome with autistic tendencies. He’s also gone through a kidney transplant. Since Cheyenne was a compatible donor, she has chosen to give him one of hers.

Living an adventurous and rewarding life, even how Baca and Ted met, is like a tale out of a movie.

When Desert Storm broke out, Baca said she was encouraged by one of her friends to start writing letters to deployed soldiers. Baca jumped to the task. One of her friend’s stepbrother was also stationed abroad and in a letter to him, they both asked for names of his coworkers that might need encouragement. He submitted all the names of the unit he was in, including that of his superior officer, Ted.

“We hit it off from the first letter and kept writing,” she said.

When Ted was due to return to the U.S. in 1991, he suggested she’d give him her phone number so the two could stay in touch that way.

At the time, Baca was working as a nanny for a year in Armonk, New York. As her year was ending, Ted suggested she stop by in Cadiz, Ky. on her way back to Minnesota to visit him.

Baca said her family was freaking out about her visiting him, since he was eight

years older than her, was in the military and they had no idea who he really was.

Ted then sent flowers to Baca’s mom and also wrote her a letter, assuring that his intentions were honorable.

“Of course, that didn’t stop my mom and sister from worrying,” said Baca. “They called me every day to make sure I was still alive.”

Traveling around, getting to know each other and just having a good time, love between the two was brewing.

Nearing the end of her visit, Baca said Ted had asked her if she’d be OK with him visiting her in Minnesota on a long weekend he had coming up over the Labor Day, which she said would be fine.

“I also joked with him: ‘When you come, why don’t you bring a ring?” she said.

Ted took her up on her advice and the two ended up having a long-distance engagement for a while. The two then married the following year.

Reminiscing, it is a content life the Bacas live, as well as looking forward to the new memories they will make as a family.