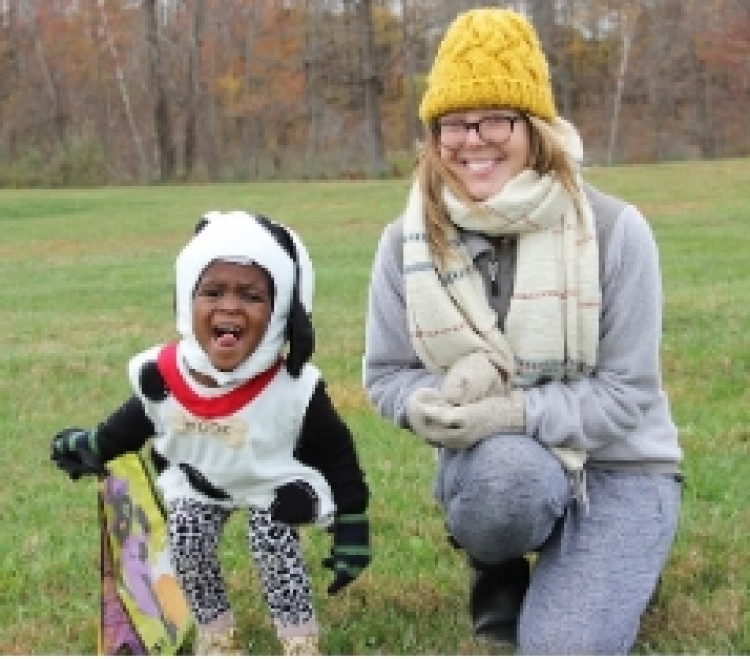 Read about Jennifer and Ryan’s journey growing their family through international adoption from South Africa in Part I of this story.

About six months after bringing home Kurhula from South Africa, we knew that we needed to adopt again. It was clear that Kurhula missed being around other children. She had been the youngest child in a foster family, living with four older foster-siblings – and although she was thriving with the individual attention that my husband and I were able to give her, she also seemed visibly lonely, and missed interacting with other children.

I had been nervous about starting her in preschool because I worried that she wouldn't separate from me, or that she would spend the morning crying. Instead, on the way home from her first day, she piped up from her car seat in her thick South African accent and said, ’Mama, my heart be full. I was with the childrens.’

That night, I went back onto some of the adoption advocacy Facebook pages [of which I was previously a member]. I didn't tell my husband Ryan that I was looking (of course) he would think that I was nuts! But one night I came across a posting about a young boy in China. His advocacy name was Ted. He was six years old, blind, and had been ‘paper ready’ since he was two. He had chubby cheeks and a big smile.

Ted was living at an organization that advocates for blind and visually impaired children in China. Ryan and I had been sponsoring children there for the last year, so we had already seen Ted in some of the organization’s videos and photos. In fact, when I went back to look through an old stack of mail, I realized that we had a postcard with Ted dancing on it! One night, I pinned the postcard to our bulletin board, and briefly told Ryan that the boy needed a family. I didn't say much more at the time but kept bringing him up over the next few weeks.

Soon Kurhula started to notice the picture and asked who the cute boy was. After a few months, Ryan and I finally looked at each other in agreement. We hadn’t planned to adopt out of birth order, but Kurhula seemed so set in her new role as our “baby.” We worried that bringing home a younger child, or even another girl, so soon after she came home might throw off Kurhula’s attachment. We had never planned to adopt a visually impaired child but found ourselves drawn to Ted regardless. Although we were nervous and had no idea what to expect, we also knew that Ted needed a family.

Ryan and I have a favorite saying: "Start with YES." So, nine months later, Ryan drove me to the airport. He stayed home with Kurhula to help maintain her routines, while I flew with my mom to China to bring Ted home.

Those two weeks in China meeting Ted passed by in one big, messy blur. I can best sum up our transition by saying it was both beautiful and awful. It was beautiful because I had the privilege of watching a young boy experience so many firsts with me -- taking his first bubble bath, eating Pop Rocks, riding on an airplane, and sharing bedtime stories with a mama for the first time. But, it was also terrible because Ted couldn't see me, I couldn't communicate in his language, and he had zero reasons to trust me.

Ted quickly realized that I couldn't understand him and stopped trying to speak to me altogether. For most of our time together in China, he pressed a radio to his ear and listened to pre-recorded songs that his teachers had given him when they said goodbye. It was heartbreaking to watch, and terrifying.

What had we gotten ourselves into? And were we really the best family to help Ted thrive?

I will admit that I was full of doubt during our trip back to New York. It was my first time alone with Ted without the assistance of a translator. That long plane ride home was one of the most miserable experiences of my life. Ted vacillated between ignoring me and pushing me away with angry tears. He didn't understand where we were or what was happening to him. We were both afraid of the unknown.

Somehow, we arrived back in New York. Exhausted, I pulled Ted through the customs line. At one point he laid down on the floor and refused to move further. I can remember propping him on top of my large suitcase and attempting to wheel him towards the arrival gate. Finally, I spotted Ryan and Kurhula in the distance. Seeing their familiar, eager faces brought me instantly to tears.

And then the most magical thing happened. Ted found Kurhula.

She said hello in a shy little voice, and the largest grin spread across his face. He instantly reached for her, feeling her dress and her hair and her arms while she stood there, trying not to giggle. In his limited English, he somehow managed to declare ‘mei mei so cute!’

A few minutes later, they were walking hand-in-hand towards the escalator to play while we trailed behind, shaking our heads in amazement.

Ted has now been home with us for two-and-half years. His transition has been (and continues to be) much more difficult than Kurhula’s. We’re still learning how to understand his various needs, get him the resources he needs, and advocate for him. There have been several doctor’s visits, IEP [Individualized Education Program] meetings, and therapist visits. But, there has also been consistent progress, and a lot to celebrate. 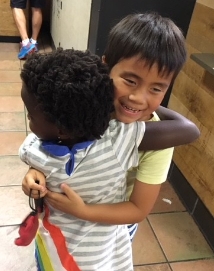 When you see Ted and Kurhula together, they almost appear as twins. Although she’s South African and he’s Chinese, and she’s seven and he’s nine, they are bonded in such a deep way. They get each other, and adore each other, and are both so much better for having the other as their sibling. Watching them grow up together is just incredible.

So incredible, in fact, that we’ve decided to do it again! We recently rejoined the South Africa program to bring home a younger sibling for Ted and Kurhula. Kurhula is over-the-moon about this next adoption and proudly tells everyone that she’s going to be a big sister. Ted is less enthusiastic but has recently started talking about all the ways he can help. He’s even setting aside picture books in braille to read to his new sibling.

As for Ryan and me, we’re trying to soak up this window of in-between time with Ted and Kurhula, since we know we will officially be outnumbered after this child comes home!

We now know enough to know it won’t be easy, but it will surely be worth it.

To learn more about adoption from South Africa and the children in need of families, visit: www.spence-chapin.org/south-africa/