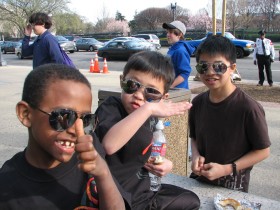 I had this nagging feeling my four boys were related. Somehow. Someway. But I just couldn’t put my finger on it. Not long ago I invested in DNA tests for each one. Last year we tested Noah and Zak. This year we tested Nick and Sam. Yesterday, the final results for Sam came in. And although I had my suspicions, now the truth is there, in the science. Nick, Sam, Zak, and Noah are genetically related! My Korean, my China Boy, my Ethiopian, and my Celtic Man are all part Neanderthal! The common link has been discovered! And I have to say, these results explain A LOT about what goes on inside these four walls.

I feel as though, however, I’ve cheated my boys out of their mother-species ancestry. And now I have no choice but to change things up a bit and make things right. I’ve found a common bond among my four boys, born in four different countries, to four different women and I can’t turn my back on this..this…this missing link. To start with, I’m declaring a new holiday in the family, Neanderthal Independence Day. Wait, if a species is extinct then independence probably wouldn’t be the best word to use.

Anyway, from now on we will embrace the day the first Neanderthal skull was discovered in 1829, 25,000 years after history’s underdogs took their final (however most likely carelessly tied, draped, or wrapped in extinct animal fur over their stocky body for decency) bow.

But I’m disappointed with myself, because I’m dealing with some serious guilt over some of the poor choices I’ve made along the way that have hindered their common ancestry.

Confessional #1 of Poor Neanderthal Parenting: I mean, really, instead of going all Norma Bates on Nick for taking a crayon and holding it against the entire length of the hall wall I should have smiled and said, “Wow Nick. Can you tell me about your cave drawing.” Or, “Hey, how about using this mixture of blackberries and raspberries for depth and pizazz (Wait, do mom’s of Neanderthals use the word pizazz?) try using these natural objects and charcoal. And detail? Psshh. Who needs it. Those stick figures you drew of Dad, Hannah, and I are exceptional. I get it. And I…get…you.”

Confessional #2 of Poor Neanderthal Parenting: When Sam was five years old he ate a chicken leg at a restaurant and then snuck it into the van and continued to gnaw on it until not even a sabertooth tiger could sniff out the flesh. He tucked the bone into the seat pocket in front of his carseat. Several weeks later I found it. Instead of breaking the bone in half and catapulting it into the garbage, pulling out thirteen Clorox wipe sheets, and disinfecting the heck out of the seat pocket, I should have patted his larger than average cranium and said, “Hey little neanderthal, lets see if we could make a spoon out of that chicken bone and give it to Dad for Father’s Day. I get it. And I…get…you.”

Confessional #3 of Poor Neanderthal Parenting: Zak was anxious for his own bedroom a few years back. Apparently the spacious cave he and Nick were sharing just wasn’t big enough for the two of them. I spent two days packing up his bed, hauling his stuff downstairs, and in general grumbling about his need for isolation. Instead of muttering in his general direction as we passed each other on the stairs I should have wrapped an arm around his shoulder as we walked into his new mocha brown cavern and said, “I respect this need for your own cave and I accept the ideology you have embraced for the need to lock yourself away from the rest of the social group for days on end. I get it. And I…get…you.”

Confessional #4 of Poor Neanderthal Parenting: When I have walked into Noah’s room and go all Type A Martha Stewart at the sheer enormity of the unorganized mess he leaves in his wake I should instead sit knee to knee with him, grasp his hands in mine, smile warmly and say, “I get it Noah. I get this need to leave your debris among your living site as an indicator to scientists 25,000 years from now. I get it. And I…get…you.”

There you have it. A new and improved way of raising my four boys. Out with the new and in with the old.

So, gone are the days of the rhetorical scream, “What are you, a pack of Neanderthals?” as my boys dive into a stack of baby back ribs sizzling on the lazy-susan because now they’ll just look at me as rib juice drips off their chins, grin while shredding the flesh off the bone with their canine teeth and reply, “Uh, yeah mom, we are!”

In this house, every day is Happy Neanderthal Remembrance Day!