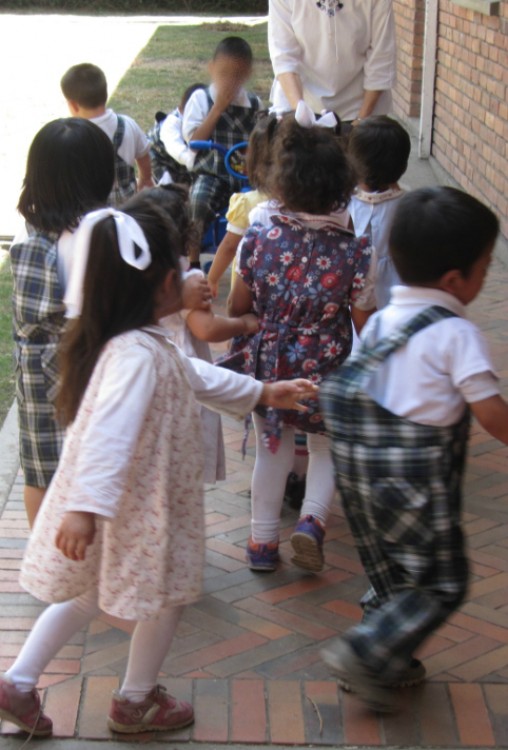 Everywhere in Bogota, there is the sound of children’s laughter.

At the end of the second day of this advocacy trip, after meeting nearly a hundred children living in Bogota’s institutions, it’s their joy, and their need, that fills my heart and mind.

The morning of our first day found us in the office of Casa de la Madre el Nino (La Casa). One wall of the office is lined with windows looking out on a small, grassy area hosting a swing set and teeter-totter.  As we took our seats around a table, 10 or 12 young children were having a turn playing in the warm morning sun, supervised by watchful caretakers who interacted and encouraged the children to run, jump and play. Our arrival did not go unnoticed by a few of the children, and they ran smiling to the windows with curious looks and calls of “Hola!”

The windowed wall opposite, looking out on a long corridor, boasted its own bustling view of the arrivals and departures of many staff, volunteers, and others whose days are filled with caring for the 120 children who reside in this private institution for Colombia’s most vulnerable children.

As the meeting with Lorena Vargas and Diana Duenas at La Casa began that Monday morning, we learned that many of the children were away for the day at their local school, a fact difficult to accept as the rotation of children’s playgroups took their turns in the sunny courtyard play-area outside our windows.  So many smiles, waves, and curious glances came our way!

This advocacy trip is an entirely new concept in adoption. The invitation to travel with Gladney to Colombia was offered to me in the hope that by learning more about the Colombian adoption system, the dedicated people who house, care for, and love the children, and by meeting the children themselves, RainbowKids will be better able to present the Colombian Adoption Program to families interested in adopting sibling groups and school-age individual children who make up the majority of children that are waiting to be matched with adoptive families.

My companions from Gladney were Beth Whitacre, Keely O’Dell Farkas, and Scott Brown. All were much more familiar with La Casa and the dedicated family and staff that run this premier facility for vulnerable children and pregnant mothers.  As Lorena shared some of the changes and improvements in their programs, it occurred to me that this was indeed a very special place.  Two private kindergarten teachers were now on staff, the ratio of caretakers to children had been reduced to 8-to-1. La Casa offers music, gymnastics, and art and provides 2 therapists for the young children, ages 0-8 years, under their care.

“We want to be the best place for children to live while they wait to be re-united with their families, or to be placed with an adoptive family,” Lorena told us. “We love these children, and we want the best families for them.  But please do not think that because we work hard for this to be a nice place, that it is like a home.  Our children need families. Nothing can replace having a family.”

As the day progressed, I learned that La Casa is one of eight private Children’s Homes, known as an IAPA, licensed to complete adoptions in Colombia.  These eight private institutions are funded differently (and therefor capable of a higher level of care) than the many public child institutions run by the Colombian Institute of Family Welfare (ICBF). The ICBF, located in Bogotá, the capital of Colombia, processes international adoptions and oversees the licensing of the private orphanages.

After 10 days, one parent may leave while the other parent waits for the child’s passport and finishes the final paperwork.  A 3 week process brings the Colombian program closer to the China program in length of travel, which is a vital component for families.

As our visit continued, a sweet girl of about 12 years wandered in and out of the office, sometimes watching us and other times dropping off bags of unknown origin. “This girl and her little sister are being adopted today,” Diana shared. “They are such good girls! Their mom is here now in another room finishing the papers.”

How hard that must be for these girls, I expressed.

“No, not really so difficult because we work hard on the preparation. Each week the girls have skyped with their mom and visited,” Diana shared, “after our children are matched, this is a required part of the process that we use. We want our children and their families to start a relationship before they meet. To know each other.”

Just a few minutes later, it was time.  The young teen and her 6-year-old sister were led down the hallway to the room where they would meet their new mom.  But in truth, when all 3 appeared back in our meeting office 10 minutes later to say goodbye and offer hugs all around, it was obvious that the girls really were not meeting their mom for the first time.

The comfort level and love far exceed what I have witnessed in the past with ‘first meetings’ of older children and their new families.  The weekly skype sessions had removed all of the awkward self-consciousness, and instead this meeting felt more like a great exhale…a relief to all that they were finally, finally united.

As the new family left, both children with arms around their mom’s waist, the legal representative from their US agency came in to say hello and slip into a chair, a little emotionally spent. She introduced herself as Soraya, and unknown to me, we would see each other many more times over the next few days.

“One year,” Soraya told us. “Too long. This was a harder case, but still it took too long. But now it’s all worth it.”  I instantly liked her.  The relief on her face was mixed with joy and her words held a quiver when she spoke them.  In this room where we sat, just one minute after the new family had left, there was a sudden but perfect silence, a shared understanding by all present that this, this is why we all do this work, to bring families together.

Our tour of the La Casa facility began. We were able to visit all of the rooms, except for the maternity area. Out of respect for the birthmothers living at La Casa, we did not tour that area. Everywhere was light.  Windows instead of walls are the standard throughout the facility, but the real warmth came in the form of wiggling toddlers and pre-schoolers who appeared in groups of 8 or 10 around every corner.

There was a group having haircuts, one little soul crying pitifully while her sister or friend held her hand and patted her.  Her haircut complete, they both skipped over to a toddler size game-table and began to happily play, the tragedy of an inch of hair removal quickly forgotten. The 4-5 year olds were on a larger, grassy play area with school-yard sized play equipment.  As we watched, a group of girls decided that our idleness could be utilized, and we were quickly put into use as “swing-pushers”.  Little plump legs pumped as we swung our little charges higher and higher and exchanged nervous glances, each thinking, “Should we slow them down? Push less high?”

Their competitiveness was apparent, even at this young age, and they screamed their encouragement to us while watching to see who was flying highest, who was today’s super-hero of the swing set.

Every few minutes, Diana would say, “Oh yes. This is ***,” and introduce a child or sibling group that was playing or walking near us. Diana would then share a few details. I learned that many of the children were not moving towards adoption, but were living at La Casa while their parents worked towards re-unification.  But no matter which child Diana introduced, some positive little detail would be attached to the child’s description, “He’s so smart, he’s like a computer!” or, “She’s the boss, that one. She has 2 siblings that are older, but she’s the boss.” Or “They have waited too long. I don’t know why they wait! Such good, good children.  They need the BEST family.  The best!”

Diana has been at La Casa for 3 years and over the course of the week I spent in Colombia, I began to suspect that she is either a twin, or she does not sleep.  She knows not only every child at La Casa, their exact legal status and history, but she also believes in her heart that, “This one, this is the best child.” About EVERY child.

Diana passionately talks about ALL of the children in Colombia that wait:

“There are 5,500 children in adoptability in Colombia,” she shared.  Adoptability is the term used when a child is deemed legally available for adoption.

For some reason, on that first day, I thought that Diana was joking about meeting all 5,500 children. I should have known better.  I should have realized then that Diana was speaking for all of the caretakers, ICBF staff and officials involved in Colombian adoption. We needed to meet the children, or as many as possible in our 5-days in-country, and they planned for us to do just that.

Learn more about Adoption from Colombia

Top 5 Reasons to Adopt from GEORGIA!