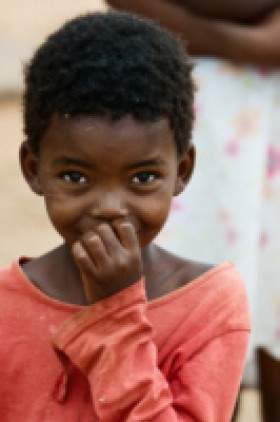 A few months after our girls came home from Haiti at ages two and four, my eldest headed outside with a bar of soap to shower in the rain. In Haiti one never wastes free water. As I raced to stop her, I thought, "why not, it's a good plan!" When you embark on the adventure of parenting an older child, be open to learning from her.

Relationships take time and the older children are, the more time it may take. Err on the side of treating your child younger than his chronological age. Put him in the youngest grade feasible, or have him wait a year to start school if possible. If there is one month of delay for every three months in an orphanage, that alone would suggest you treat a three year old as a two year old and so forth. Try to play "baby" with children adopted at any age. Provide lots of verbal assurance that adoptive families are forever and you will still be his parent even when you are walking with a cane and all your hair has turned gray.

Be prepared for an initial honeymoon period after your child arrives home, followed by frequent tantrums that may involve kicking, hitting or biting. (I'd be frustrated and upset too if I had been abducted by aliens, wouldn't you?) These behaviors and outbursts should decrease in frequency and duration over the first several months at home.

Don't isolate your child for punishment; go with time-ins instead of time-outs. Have her sit close to you or where she can see you; don't send a "conditional love" message of putting her away from you when she misbehaves. Don't withhold food, even if it seems she is overeating. Many older children have never experienced "full" and they are trying to discover what that feels like. Some older children have not always had the security of knowing when the next meal would be provided and if there would be enough for everyone. My oldest daughter used to eat with her arm around her plate after she came home, because older children at the orphanage would sometimes help themselves to some of her food and she felt a need to protect it.

It's important to discern whether a particular problem behavior is an adoption issue or a typical child development pattern. Talk with your post-placement social worker about behaviors that concern you. She can help you connect with outside resources if typical interventions do not seem to be working.

I asked some parents on Dillon International's Older Child Adoption Forum to share some of the challenges of parenting older children. Many mentioned sibling rivalry issues. When a conflict between siblings occurs, the parents use timeouts for everyone involved (no sorting out who said what). This helps kids learn to work things out on their own.

Communication can be another hurdle. Many families report that they wished they had learned some basic phrases in their child's native language. Seasoned parents suggest studying the language of your child's birth country, making a book of common words and signs to use when the child first arrives home, or asking a local person fluent in your child's native language to visit once or twice a week to help clear up any misunderstandings that may have arisen. Other parents reported their children learned English quite quickly and wouldn't put that as a top consideration at all!

Work hard to help your child adjust, but remember you are adjusting too. Some parents said they hoped to feel a connection to their older child quickly, but it took some time. Many experts state that when a child has been with you as long as they were with another caregiver, a final stretch of bonding and attachment occurs. One day this journey will be recalled with plenty of fond memories. As one mother said, "I just wish I could tell everyone what a delightful experience (adopting an older child) will be for them. Our daughter is a treasure and we would do this all over again--even the difficult days."

The Need for International Adoption from Haiti

A Watershed Moment for Haiti Adoptions