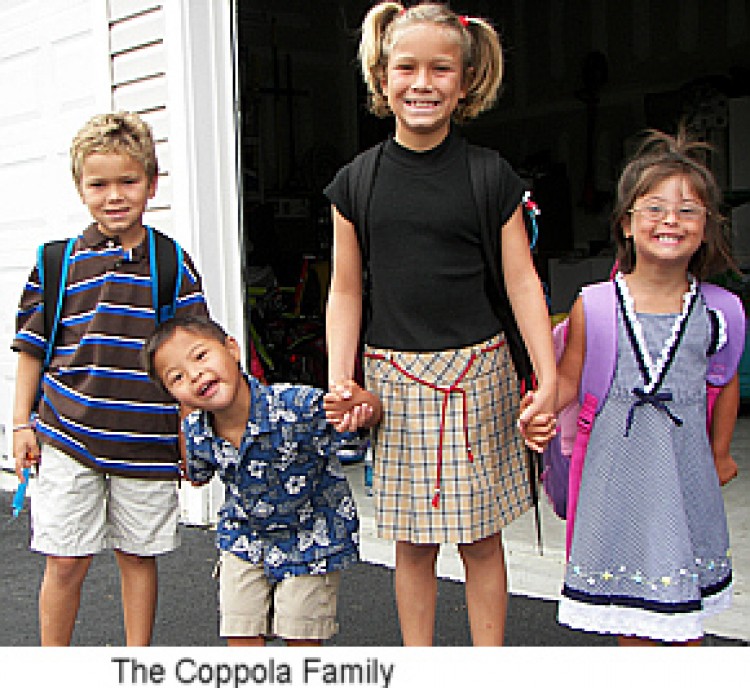 Shelley and Robert Bedford have a wonderfully familiar adoption story that families throughout the USA can relate to: Their hearts called them to expand their family through adoption, and a year later they brought home their longed for child, Xander. It's familiar tale, a version of which is shared by thousands of families each year. But the real story lies between the longing for a child and the victorious homecoming. Somewhere along the way, the Bedfords joined a growing number of families across America who choose to adopt a child with Down Syndrome.

Shelley and Robert began a friendship while Robert was stationed in Iraq . Their correspondence blossomed into a romance, and the couple, along with Shelley's two birth children from a previous marriage, joined together to become a family. "We knew from the start that we wanted more children. Robert is adopted himself, and we thought this would be a wonderful way to expand our family." After having daughter Zoie in 2005, the couple again visited the idea of adoption.

"I was up one night late in December 2006, just cruising the internet" shared Shelley. "Somehow I ended up on a website featuring children with Down Syndrome. I found myself reading about child after child with Down Syndrome that needed a home. A total peace came over me. I thought: This is it. This is what I have been looking for."

On July 23 rd in 2007, the Bedfords sat down on the floor of a Ukrainian orphanage and held out their arms to their son, 4-year-old Xander. The light and joy that Xander has brought to his parents and siblings cannot be measured. In just a little over a year, sweet and loving Xander has grown in body, soul and mind, giving his family gifts they could have never imagined.

Shelley and Robert's hearts and home still had a little room to spare, apparently. Just a few months after Xander joined the Bedford household, Shelley found herself once again on Reece's Rainbow, the internet's leading Down Syndrome Adoption ministry. "My heart was captured by a pair of big brown eyes. I knew from the first time I saw him that he would join our family." And just 4 months later, in April of 2008, Grifyn Bedford joined his family from the country of Serbia .

The Bedfords are part of a growing trend of families that turn to intercountry adoption to find a child with Down Syndrome. In prior generations, mothers were told when they had a baby with Down syndrome or another disability, 'Put the child in an institution and forget about them,' today there are long waiting lists in the USA to domestically adopt children with Down Syndrome. Unfortunately, the same cannot be said for many developing countries, where Down Syndrome is still looked upon with embarrassment.

"These children are viewed as outcasts with no ability to learn or be functional members of society.  They languish in mental  institutions, hidden away from the world in shame." Says Andrea Roberts, founder of Reece's Rainbow.

Started in June of 2006, Reece's Rainbow advocacy has grown from only 5 waiting children in one country to more than 100 waiting children in 24 countries. In just two years, they have found adoptive families for 118 children with Down Syndrome. Through donations from individuals, businesses, and other charitable organizations, they have been able to provide adoption grants for nearly every child they work with.

Famlies like Scott and Kristin Coppola, who first considered adding to their family in 2004. Scott, whose brother has Down Syndrome, was especially interested in adding to their family through the adoption of a child with Down Syndrome. With much prayer, and the assistance of their adoption agency Bethany Christian Services, the Coppola's brought home their son, 15-month-old Joshua, from Hong Kong in 2005.

"He has been such a joy and a pleasure in our lives," shared Kristin, "It's because of him that we decided to adopt Taylor." Six-year old Taylor was the first child with Down Syndrome to be adopted from the Republic of Georgia . Although the Coppola family wished to return to Hong Kong for a 2nd adoption, there were unfortunately no girls available for adoption at that time. The Coppola's were led to a special program developed by the adoption agency Hopscotch Adoptions, which has developed a unique program that specializes in the placement of children with Down Syndrome.

"Taylor was 6 when we adopted her, which was a little more challenging because of all her learned coping mechanisms and from being in an orphanage so much longer. But she is a loving, busy, and precious addition to our family."

Hopscotch adoption agency director, Robin Sizemore, originally visited an orphanage in the country of Georgia . "I came upon a room that was full of the most beautiful little babies, over 20 babies. Upon a closer look the babies each had Down Syndrome . They were SO beautiful and the room was so serene, even joyfully quiet." Says Robin. "Although it took over 2 years, we were able to convince everyone involved that these children are very much wanted and valued by adoptive families in the USA . Taylor Coppola was our very first child to come home from Georgia ."

Since that time, Hopscotch has expanded their program to Armenia, where 7 families wait to travel, and 30 additional children with Down Syndrome have been added to the adoption registry in that country, waiting to be matched with families. "Truly," says Robin, "there could be no greater work. I love helping families adopt these special children."

The Coppola family also worked with Bethany Christian Services, which advocates extensively for children with Down Syndrome. "I would say one of our most exciting opportunities for families is the adoption of a child from Hong Kong who has Down Syndrome," says orphan advocate Janie VanDyke. Since 2000, Bethany has placed 40 children with DS into adoptive families, most coming from their special Hong Kong program. "It's such a good program. The kids receive excellent care, the program fees are very low, and we accept both single women and couples into the program."

Currently Bethany Christian Services has children of various ages with Down syndrome waiting for Intercountry adoption in countries many countries, including Hong Kong, South Korea, Albania, Columbia and Lithuania. These children are waiting and ready  to be matched and come home to their forever families!

As one family recently said, "It's a challenge, it's a joy, it's worth every moment." Amen.

If you would like to find out more about adopting a child with Down Syndrome, visit the RainbowKids Special Needs area, or our waiting children.


HOPSCOTCH ADOPTIONS, INC is a HAGUE accredited adoption agency with active programs in: ARMENIA, BULGARIA, GEORGIA, GHANA, GUYANA, MOROCCO, SERBIA and UKRAINE. Also assisting on a case by case basis: PAKISTAN & KINSHIP Adoption from any country.  We assist in the placement of children into nurturing, prepared and stable families from these countries. Hopscotch can assist any family in the US and abroad, US citizens and non-US citizens, if the country of residence so permits. Hopscotch also provides HOME STUDY SERVICES, education and post placement services for residents of NORTH CAROLINA and NEW YORK or families residing abroad. Contact us today to begin your adoption journey!