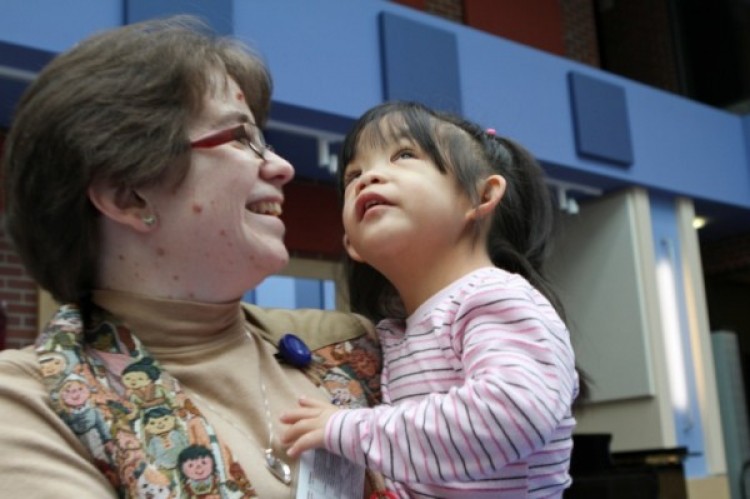 The Chinese New Year, a day to celebrate good fortune and happiness, is coming up. But the holiday came early for Dr. Catherine Ward-Melver and her newly adopted daughter, Zoe, who is Chinese.

Dr. Ward-Melver, a clinical geneticist in Akron Children’s Genetics Center, and her husband, Kevin, traveled to China in early December to complete the adoption and bring 3-year-old Zoe back to Akron to start their new life together.

Zoe was not only given the gift of loving parents and a new home but a mother who shares a special bond. Both Dr. Ward-Melver and Zoe have Turner syndrome, a genetic condition in which a woman does not have the usual pair of two X chromosomes. The condition is associated with identifiable physical features, short stature, incomplete development at puberty, and infertility.

“Since childhood, my parents were up front with me about this and that I would most likely need to create my own family through adoption or assistive technology,” said Dr. Ward-Melver.

In retrospect, the path to meeting Zoe seems to be destined.

Dr. Ward-Melver is the past president of the Turner Syndrome Society of the United States and her interest in adopting a baby or young girl with Turner syndrome was known to those who work at the non-profit group dedicated to advancing knowledge, research and advocacy for girls and women with Turner syndrome.

The Melvers were licensed foster parents when the Turner Syndrome Society emailed a small group of families with an interest in adoption. They had received an inquiry about a little girl diagnosed with Turner syndrome.

The Melvers were immediately interested and wasted little time in beginning the international adoption process, which included a detailed home study, a mountain of paperwork and a trip to China to meet Zoe.

Becoming parents has been an “amazing experience,” said Dr. Ward-Melver.

“We watch her explore and learn new words,” she said. “Zoe just began pre-school and loves being around other children. She loves music and loves to sing.”

Zoe will certainly benefit from having a mother who is a leading expert on Turner syndrome and will get her linked into all the Akron Children’s pediatric specialists she will need over the years. These include endocrinology and cardiology. They’ve already used and appreciated the services of the hospital’s Oak Adoptive Health Center.

Akron Children’s has a Turner Syndrome Clinic and every few years the hospital hosts a symposium call “Hot Topics in Turner Syndrome” that attracts patients from throughout Ohio and the region. In addition to the great medical information it provides, the symposium gives girls and families a chance to come together and become a support group.

Dr. Ward-Melver is already planning to take Zoe to the next national meeting of the Turner Syndrome Society in Dallas this July, where friends are eagerly waiting to meet her.

“That is something that I really want to be different for Zoe,” said Dr. Ward-Melver. “I did not know any other women with Turner Syndrome until I got to medical school. When I see these girls and women get together at conferences, they have so much fun and so much to talk about and, of course, the girls keep in touch through social media. I want Zoe to grow up knowing that she is a healthy, delightful girl who just happens to have Turner syndrome.”

To view waiting children with Turner Syndrome click the image below