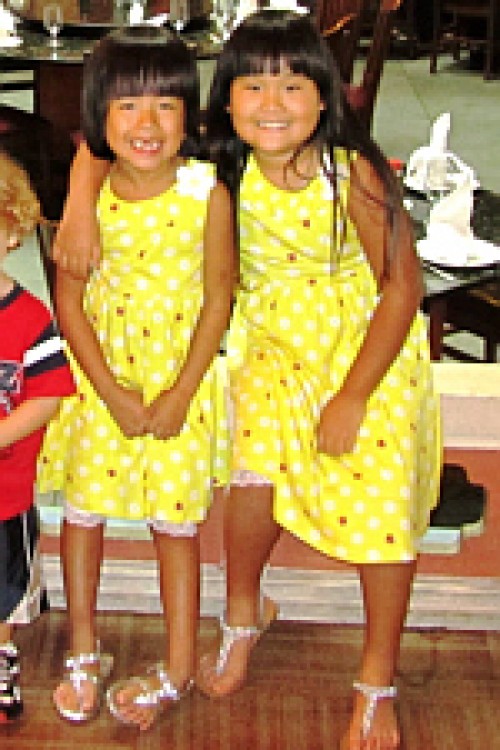 Hi, my name is Hannah. I have two sisters and a brother. I am scared sometimes because I think  that I won't be as good as other people because I have some problems from being sick, but I am not scared anymore. My Mom told me to remember that I am one of a kind, and I make a difference on this earth.

I was born in Henan, China. I was an orphan until a great family  adopted me in 2007. Before that my condition was bad. When I was left at the orphanage, I was 4 months old. The orphanage did not have enough money for the surgery I needed. I was born with Hydrocephalus and Spina Bifida, and I was very skinny and sick. They told us that the Director of my orphanage paid for my surgery out of her own money. I was the first baby brought to this orphanage in 2002. When I was 2 years old, I got an infection in my brain. I was in the hospital for 3 months. They shaved off all my hair and took out my shunt. They did not have more money to put in a new one. I did not like looking like a boy.

When I was adopted, we went back to see where I had lived. The Director cried. I got to keep the clothes I was wearing from the orphanage, and I keep them in a bag under my bed.

When I came home from China with my new family, I had a surgery to help my head, it was called an ETV.  I can't say the big name. Anyway, in about 8 months my  Doctor said that it had closed back up, so I needed another surgery  to put in a new shunt. When Dr. O. put in my new shunt, he tried to remove the parts still left in my brain from before, but it was stuck. He could not get it out. He is very nice. He did not cut off my hair, and he put in the new shunt where I had my old scar. I have lots of scars, but they don't hurt  anymore, sometimes they just itch.

Last year and again this year, I got slit ventricles. The Doctor examined me, and told me I would have to stay in the hospital again. I was crying, it hurt so bad. I kept getting sick. My head hurt & my stomach hurt. I kept telling my Mom I don't want to stay here forever. I was so scared. My Mom told me it would be OK, and I would not have to stay for long. My head hurt all the time, and the lights made it hurt worse. I know when I have a headache, I have to tell my Mom, or call my Mom if I am at school. That's how I got here, with the best parents ever. When I am in the hospital they never leave me. My Mom comes in the morning and stays all day. Then my Dad comes at night, and sleeps on the sofa in my room next to me.

Do you ever wonder what hydrocephalus means? It means water on the brain. I have had to get many tests because of my  hydrocephalus. Some hurt  and some don’t. I had to get an implant in my arm when I was six. I was growing up too fast, they called it CPP. They put  a new  one in every year after my  Birthday. My eyes sometimes don't work right, that is from the Hydrocephalus too. I sometimes run into things, or lose my place. This year after the slits, they did something  called an EEG. They told my Mom  that I have Epilepsy, so now I have to take medicine so that I do not have seizures.  I hope no more children have to have hydrocephalus. It is not fun, and can make you very sick. I sometimes have to miss doing things with my friends because I have to be careful that I don't get hit in the head.

Last year I got a new sister named Haven. She has hydrocephalus too. We can talk to each other about it, because we both know how it feels. It feels good to have a sister who knows what hydrocephalus is. Now I am not alone, we can help each other get through anything. That's what it means to have a family.

"Hannah's adoption was facilitated by Great Wall China Adoption headquartered in Austin, Texas in 2007. She now resides with her loving parents and 3 siblings in Orlando, Florida. This is the story of one brave little girl, living life with Hydrocephalus and refusing for it to do anything but empower her."

When Adopted Toddlers Reject Their Parents