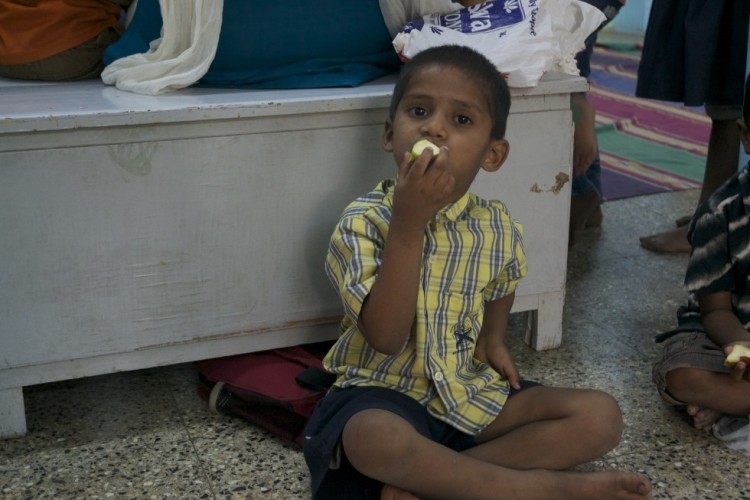 The Orphan Nutrition Program has seen amazing success since it began 3 years ago in India, China and Vietnam. But even more amazing are the stories of individual children whose lives and health have dramatically changed with better nutrition and feeding methods.

Ajay* is a sweet young boy whose potential and personality were long unrealized. He lives in a care center in Pune, India and has cerebral palsy in addition to other physical and mental disabilities. He is almost 4 years old, but appears small and skinny for his age — a result of malnutrition. Ajay’s days are pretty uneventful: he lies in his crib and when he is fed, also while lying down, he is barely able to choke down his food. But one day was different. On this day, he sat up in a chair for one of the first times ever. Although he can’t speak, the expression on his face and the light in his eyes seemed to clearly shout: “Hello world, here I am!”

This day took place in spring 2015 when Holt and the SPOON Foundation did a Safe Assessment of Feeding Environments (SAFE) training at Ajay’s orphanage as part of Holt’s Orphan Nutrition Program (ONP). During the SAFE training, orphanage caregivers are taught about safe feeding positions and methods for children depending upon the child’s age and special need. To demonstrate proper feeding positions, the trainers shined a spotlight on Ajay.

Like many other children with cerebral palsy or other special needs who are living in orphanages, Ajay had always been fed while lying down because his caregivers simply did not know that there was another way. They didn’t have the resources or training to help him sit up. And they didn’t know how to engage with him — to find ways to communicate with this unique and beautiful individual.

Aloura DiGiallonardo, Holt’s nutrition initiatives coordinator, was there to see the joyous moment when Ajay first sat up. Once he was stabilized in a chair, trainers fed him, demonstrating for the caregivers the correct way to do so. “He’s very slow and very messy and he takes a lot of convincing [when he eats],” Aloura says. “But for the first time, he wasn’t simply just tolerating his meal. He was participating in it.” Aloura said that being fed in an upright position helped Ajay to see the world in an entirely different and better way. She said he laughed as he was being fed, absolutely thrilled with the attention he was receiving.

After the feeding, there was also a moment that deeply moved Ajay’s caregivers. Beth Williamson, SPOON’s occupational therapist, pulled out her phone and showed how Ajay could track the screen’s changes with his eyes. The caregivers immediately started to cry — it was the first time that they realized Ajay’s abilities, and that he, just like all other children, needed interaction and love.

“They just didn’t know,” says Aloura. “And they didn’t know how to do the things to make his response possible.”

Because of the ONP training, Ajay’s nutritional needs, body and spirit are now cared for in an entirely different way.

Over the past few years since Holt began the ONP in collaboration with the SPOON Foundation, we’ve shared similar updates about how this program is changing the lives of children. So far, we have implemented the ONP in care centers we support in India, China and Vietnam, where children are now being screened for nutritional deficiencies, caregivers are receiving training on effective feeding methods, physical and mental disabilities are being prevented and children with special needs are receiving the extra nutrition and attention that they so desperately need.

Perhaps one of the most impressive statistics comes from our legacy partner where Ajay lives in Pune, India. Wasting and stunting have decreased dramatically and anemia has nearly been eradicated through nutrition screening, diet adjustments and supplemental iron!

While we can list more statistics like this to communicate the impact of the ONP, we’re most excited about sharing the stories of individual children — the boys and girls like Ajay who are overcoming the effects of poor nutrition, who are being fed properly and who now have the sustenance they need to survive, be healthy and reach their full potential. Preventing malnutrition in a child’s early years can even prevent long-term mental and physical disability, as the brain and body develop enormously in the first year. For many children with special needs, eating was once a scary and sometimes painful experience. But now, for the first time, they are actually looking forward to mealtime. Here are some of their stories:

Ravi* lives at an orphanage in Pune, India. He was only around 5 pounds when he was born, and had to have heart surgery when he was 3 years old. While these were already two counts against him, he was also underweight and anemic from malnutrition.
But just 18 months after Holt implemented the ONP program in his care center, he is no longer anemic and has caught up in his growth! Read more about Ravi here from the SPOON Foundation.

Ten-year-old Minh* lives in an orphanage in Vietnam and has cerebral palsy, low vision and is a quadriplegic. Like Ajay, Minh’s caregivers fed him laying down, unaware of the harmful effects. During feeding times, Minh would barely swallow his food in between coughing. As a result, he wasn’t receiving nearly the amount of caloric intake that he needed for his condition, and he also experienced ongoing respiratory illnesses.

When Holt conducted a SAFE training at his care center, his caregivers were given the tools and knowledge needed to feed him safely and efficiently. Read more about Minh here from the SPOON Foundation.

While doing a SAFE feeding training in China, Holt and the SPOON Foundation helped orphanage staff practice feeding techniques on a little girl named Ru*. Ru has cerebral palsy and is about 9 years old. To keep her body supported in a safe feeding position, participants stuffed pillows and towels around her body and head, during which she remained incredibly tolerant — and even liked it!

“What I like best about the feeding portion of this training,” says Aloura, “is how it gives caregivers the technical expertise to engage and interact with these children who are otherwise difficult to engage with if you haven’t had prior training or experience.”

Aloura laughs as she describes how Ru’s face completely changed as soon as she was raised up to a sitting position. “Her face was so funny! You could tell that there was a sage little soul in there,” Aloura says. “She just had a little smile and was happily looking around — it was so sweet. She was just so happy the whole time because of the attention she was getting.”

Ajay, Ravi, Minh and Ru are just some of the hundreds of children whose lives are being changed through the ONP.

On both a large and individual scale, it’s evident that Holt’s ONP is having a dramatic effect on children in orphanage care. After receiving training, some caregivers are even teaching these methods to other child welfare organizations and parents in their communities — the impact of which is immeasurable.

In the next year, Holt will continue to collaborate with the SPOON Foundation with plans to extend our ONP to care centers in Ethiopia and Mongolia. In these places, we will conduct an initial needs assessment for the care center, give nutrition screening training to develop growth charting for each child, do feeding evaluations and trainings, and give caregivers direction in how they can best implement the nutritional and feeding changes to benefit the children in their care.

“I’m really excited that we’re getting out there and [taking the lead on] a really underrepresented issue in a very underrepresented population,” says Aloura. “For the children involved in this program, there will be a life-long impact.”

*all names have been changed

Every year, nearly 10.9 million children under the age of 5 die from preventable causes — nearly 60 percent from malnutrition. Hunger-related disease and malnutrition steal more lives than tuberculosis, AIDS and malaria combined.  Holt's Orphan Nutrition Program is working tirelessly to bring solid balanced nutrition to the worlds most vulnerable children.  If you are interested in supporting this amazing cause, contact  Rose McBride at rosem@holtinternational.org or give a nutrition item from Holt's Gift of Hope catalog.

Adopting a Child Who is HIV+: Disclosure and Stigma