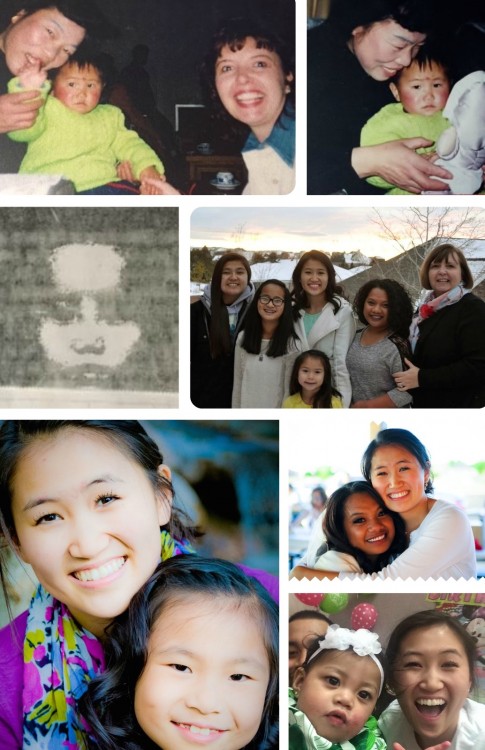 Nineteen years ago today, January 13th, my husband and I restlessly waited in the frigid conference room of the Wuhan Lijiang Hotel for a glimpse of the child who was about to become legally ours.  Other parents held up a tiny referral photo in their shaking hands trying to match themselves to one of the baby or toddler girls who were spilling out of the arms of their caregiving ayi’s.  We had no idea where to start and went from ayi to ayi sharing the one thing about her we did know, her name.  We queried from ayi to ayi until we got a smile and small knod.  And there she was.  Finally, we saw the child who was connected to the end of our much tangled red thread.

By the fall of 1996 the dossiers were at last transferred to the Ministry of Civil Affairs.  Surely the process would move forward.  But….It. Did. Not.  There were no answers until one finally came from the CAC (now known as the CCCWA), “At the moment, CAC is following very restrictive standards of law and special needs. Only the families who meet these standards can make a move in the process.  Based on their conversations it looks like that it will take a longer time than expected.  CAC is working on new standards.  They are not going to assign referrals for those unqualified families until new standards are made.  Those unqualified families with referrals for children that do not fit the law will be studied on a case by case basis.”

At that time, Chinese adoption law stipulated that all children adopted by single applicants or to married applicants who were both not aged 35 years old, or those who had children must be assigned a child who had special needs.  Many of us waiting families had children who had no special needs other than needing a family.  Our Fu Mei was 3 years old.  Surely this would be considered a special need.  Surely.

Time dragged on and weary parents began to lose hope.  It was a discouraging and scary time for parents.  Many hours were spent on the newly created A-P-C  group that had been formed from the wonderful magic called the internet.  Jarringly, the new standards were released and parents started losing their referrals.  Just like that, the child they had embraced and fully imagined in their family was gone.  No fighting changed the minds of those in charge.  Law was law.  Parents did not sleep.  Worry transmitted itself across the World Wide Web just as much as it did through our disheartened words.

Where was our red thread?

One restless night, a discussion grew of a Chinese story about a red thread connecting people.  The story went that no matter what happened this thread would bind those whose destiny it was to meet.  I pondered this through the night and in the morning typed this heartfelt summary, “An invisible red thread connects all those who are destined to meet regardless of time, place or circumstance.  The thread may stretch or tangle, but will never break”.  I shared it with our fellow parents in limbo and it gave us hope.  It became like a banner assuring us that we would see what should be.

In November 1996, my husband and I took a work trip to Beijing as China coordinators with Children’s House International.  The night before we were to meet with the officials of the CAC we got a fax that was too impossible to understand.  A fellow adoptive mother traveling to our child’s orphanage had given our gift box for Fu Mei to her director.  The director shook her head and handed the box back.  In the confusion that ensued, it was translated that Fu Mei was no longer there.  Earlier in the summer, relatives had come to the orphanage and taken her with them.  “Gone”, they said.  They had done their job. They sent notices to the Ministry of Justice.  How did the family not know the child was no longer there?

The next day we shared the information with CAC Director Zhang who said she would research the situation and asked us to return the following day.  We returned and then departed with hearts as empty as the spot Fu Mei had taken in her orphanage.  We longed to know that Fu Mei was well and happy and home.  But there was never any more we heard about her.  We still hope, and always will, that world has been kind to her.

Where was our red thread?  What happened to our knot? How was the tie severed?  Why? Seriously, why?  While we rejoiced for Fu Mei’s birth family, we felt forsaken.

On December 5, 1996, a fax clicked through our rolling paper fax machine.  We watched as a mark began to take shape.  Hair?  A forehead perhaps?  A nose, yes! It was a nose.  Following were the words, “We have reassigned another child from the same orphanage as Fu Mei.  Child name: Huang Fu Yang, female, DOB  XXX.  She is deaf, not able to talk.  She also has a history of many sicknesses.  Please inform us as soon as possible if the adoptive family agree to adopt her.”  Immediately our answer was, “We agree!  Of course we agree!”  We never received any additional information nor a picture of our child other than when 5 minutes after midnight on Christmas morning, the fax machine rang again and travel approval rolled out.

It was there all along, it was just a little tangled

So, that frigid morning in Wuhan we finally saw the face of our child whose journey was so difficult.  It wasn’t until 4 days later when we received the official abandonment certificate did we learn that Fu Yang had only been abandoned in August 1996.  She entered the orphanage with a virulent ear infection that had dissolved parts of her cheekbone and had erupted through the side of her face.  It was continuously draining pus from the ear as well.  That condition remained chronic through her entire stay at the orphanage putting her at high risk for sepsis and an abscess in her brain.  She was also consumed with raging shigella, giardia, and asceris worms.  Her physical pain was intense and constant.  Had she stayed in the orphanage much longer, her hearing would have been totally lost and the risk of life threatening complications real.  The other girls who entered her orphanage at the same time were not assigned to families for another 8 months.  That was extra time Fu Yang did not have to spare.

Had our red thread truly been torn?  Or was this actually the red thread in its magnified “knottedness”?  Fu Mei had left the orphanage immediately after we received her referral.  We sat for months waiting on a situation that would never resolve the way we anticipated.  But during all this time, a vulnerable child named Fu Yang had entered that same institution, desperate for an expedited placement home.  Had we not just lost the referral for Fu Mei, would we have been prepared to accept the referral for a child whom to us had no face, no history, no certainties? Very likely not.  What if the message that Fu Mei was gone had not been lost in the changes between the Ministries?  Would there have been a family ready to immediately travel for a child without having even a photo or any kind of medical information?  Perhaps not.  In addition, Fu Mei's thread seemed to tug her back home to where she was supposed to be.

Recently I was looking at Chinese bedding on Amazon.com and came across pillows embroidered with the phrase created that troubled night nearly two decades earlier.  I have watched those words grow and spread.  I have seen them take on a life of their own, even falsely proclaiming to be an Ancient Chinese proverb though it is only based on an old Chinese belief.  This quote has been inscribed on wall hangings, necklaces, mugs, maps, published books, business names, family scrapbooks, and even tattoos!  But looking at Fu Yang, a gifted young woman who is studying at a major university, I know our thread did stretch, it did tangle, but it did not break, not ever.  It connected us and still does to an incredible story that continues to unfold.