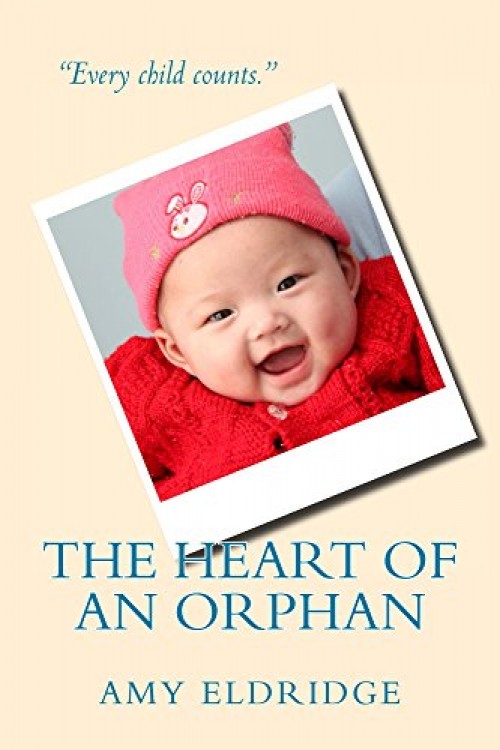 An excerpt from Chapter 1 of the newly published "The Heart of an Orphan" by Amy Eldridge of Love Without Boundaries. Free on Amazon Kindle December 6-10, 2016!

Obviously thousands of people visit orphanages every year and are able to return to their lives back home quite fine, but for me, walking into my daughter’s orphanage for the very first time changed everything I thought I knew about my life.

I woke up at 3 a.m. that fateful morning in my daughter’s birth city because of jet lag, but also because I felt electrified that the day had finally come when I would see Anna’s first home. I lay in the bed with a million thoughts running through my mind about what I was soon to see. I began praying that God would open the doors that were meant to be open and give closure to the questions for Anna that could never be answered.  I was actually crying as I left for the orphanage, feeling truly overwhelmed that I was being given the opportunity to meet those who had cared for my daughter.  It had taken many months to get permission to visit, but it only took a few minutes by taxi to pull up into the orphanage courtyard, which was flanked by multi-colored flags and the words “Children’s Paradise” over the front door.  The building itself was six stories high, and, as I looked up, I could see about 20 children in the windows above me watching my arrival guardedly through metal bars.  I took a deep breath as I stepped inside the entrance. The first thing I can remember registering was that the entire building was so very quiet.  I knew over a hundred children lived in the orphanage, and so that strange silence struck my heart almost immediately.  I was met at the bottom of the stairs by one of the women who had brought Anna to me at my hotel many years earlier on my adoption trip.  She warmly welcomed me as a guest of the orphanage and then led me upstairs past row after row of metal baby cribs, filled with abandoned children starting solemnly at me with their dark eyes.  They didn’t make a sound.  I know it probably sounds cliché to say that it was like time moving in slow motion, but my mind was struggling to fully grasp that all the children surrounding me had no parents to care for them.

One of the orphanage staff members took my arm and led me to Anna’s baby room, pointing to a crib that she had supposedly slept in. I was overcome with emotion picturing my now loud and vivacious daughter in this eerily quiet room.  In the moment, it became so absolute to me that my child had been orphaned.  I know that sounds ridiculous since, of course, I had adopted her because of that reality.  But it was honestly just an abstract concept to me before.  Now I was standing in my daughter’s exact room in front of a blue metal crib, staring down at a new little baby lying exactly where she had as well.  It is so easy as adoptive parents to think our kids’ lives start when they meet us, but it finally hit me in that moment that my daughter had lived through something no baby should experience.  During the first few days of her life, she had lost her parents.  She was left all alone in the night on a village street.  She was picked up by the police and then placed into an institution.

I tried to soak in everything I could for her that day so that I could fully tell her about where she had come from.  Her room was cold but clean, with very Spartan conditions and white walls.  The babies were all bundled in threadbare snowsuits and blankets, lying flat on their backs in the crib on straw mats.  I never thought about whether she had been cold as a baby as heat is something most Westerners take for granted. I was told that most orphanages in China at that time didn’t have heating systems. Even though I was in southern China, the orphanage on that January day was extremely cold. The nannies began picking up babies for me to see, and their little cheeks were all red and chapped from the winter air. I held baby after baby, and so many of them would lock their eyes into mine, wanting to make that human connection. One of the hardest moments was when I picked up a little girl in a yellow snowsuit named LuLu.  Her black hair was sticking straight up in all directions, and she snuggles into my neck with all of her might.  Just a few moments after I had her in my arms, I was told we had to move onto another room. I reluctantly went to put her down, but she just clung onto me, her eyes welling up with tears when I tried to lay her back down in the crib.  As a mom, there was something so inherently wrong with putting down a baby who so obviously needed to be held, as when I released my hands from her body she began to sob loudly.  Everything in my heart was telling me to go back and scoop her back up again, but I was told firmly it was time for us to leave.  As I headed down the steps to the floor below, I could still hear her piercing cries echoing in the hallway.

On the next floor, I was taken to one of the toddler rooms, where the children were sitting at little tables getting ready to have their firs of two meals that day. I watched as the nanny placed a tiny metal bowl filled with white rice in front of each child. The children looked at me warily but then began to eat.  One little girl who was extremely thin caught my eye. I knelt down to her level, quickly noticing that her lips and hands were a deep blue. I gently took her little hand in mine, and her tiny fingers were like ice.  Her eyes were impossible to describe. So incredibly beautiful, but so very solemn. I looked down at the little girl’s bowl and saw she had eaten all of her rice, and then she began scraping the sides of the bowl trying to get every last grain. All of the children were looking at me now, and I asked if it would be okay to give the kids an extra treat I had brought, some pork jerky bought from a street vendor on the way to the orphanage. When the bag was pulled out, every eye in the room locked onto it.

I took out a piece of the jerky and ripped off a small amount to give to the little blue girl. When the other children saw the meat in my hand, their little mouths dropped open like baby birds, holding their breaths hoping I would put something inside. I walked child to child, hand feeding every one, and I will never forget the emotions that washed over me as I realized just how hungry they were.  I got down on my knees to hand out the food, and a little girl with a strawberry birthmark over half of her face came up to me. She looked to be about three. Her eyes definitely told me she didn’t trust me, but she bravely put out one hand to take a piece of meat. She then quietly sized me up and slowly put out her other hand. I put a piece there too. I could see the wheels spinning in her head on how she could possibly get even more, and then she slowly opened up her mouth to let me put a third piece on her tongue. I don’t ever want to forget that moment, as, in that quiet room of toddlers waiting anxiously for me to feed them, God began turning my heart inside out.