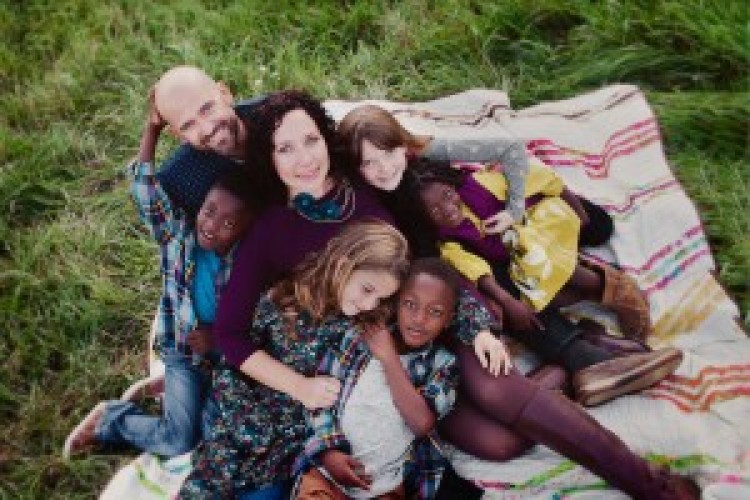 While Dave and Becca had always planned on growing their family through adoption, they thought they would adopt one child—not three siblings! But God moves in mysterious ways and now they can’t imagine their family without their adopted children.

“We’ve always been interested in adoption,” said Becca. “We originally planned to adopt from the foster care system. But just as we received our foster care license, my husband took a job that moved us from our home state of Florida to Michigan.”

With this turn of events, they decided to explore other options. “The foster care system in Michigan didn’t feel like the best fit for us for a lot of different reasons,” Becca said.

Then one day, when Dave was on a business trip, he felt God pushing their family towards international adoption. Within a month, they had attended several adoption meetings and selected All God’s Children International as their adoption agency.

After initially pursuing the Ghana program, they felt sad and discouraged by the closure of the program. They wondered if they were meant to adopt at all.

However, shortly after the closure of the Ghana program, everything changed.

In the midst of their sadness and confusion about what their next move should be, Becca decided to look through AGCI’s waiting children webpage. “I did the stereotypically female thing and cried my eyes out while looking at photos of waiting kids,” Becca said. “I was scrolling through the website and I saw that one their names was listed as Gavin,” Becca said. “My nephew’s name is Gavin and it immediately caught my eye. They just took my breath away. They were supposed to be ours.”

Becca then texted her husband and asked him to check the link she had just emailed him.

Dave texted back: You need to call Kate (their adoption caseworker).

“I called our caseworker, Kate, immediately and said, ‘we feel like these are our kids,’” Becca said.

Dave and Becca had initially said they would just like to adopt one child, but they were open to siblings. Little did they know, their boys had a little sister waiting who would also join their family!

While they were excited, Becca feared that she wouldn’t be able to meet everyone’s needs.

“After we decided to adopt to three kids, I was worried that it might be detrimental to my biological girls who were already in the home,” Becca said. “It was something that I really had pray about. But I realized that God has called my entire family to do this and we aren’t meant to live in a safe, perfect world.”

Twins Edwin and Edwench (7) and Tamara (5) have now been home for 10-and-a-half weeks and are thriving! While the kids are adjusting and bonding well, Becca remembers their first month home as, “one of the hardest months of our entire lives.”

“But I knew it would be,” said Becca. “A lot of our friends have asked us, ‘what have you been surprised by?’ And the honest answer is nothing. Through our training from the foster care system and our international agency, we felt that we had been very well prepared for the realities of adoption."

“We knew it was going to be difficult and it has been,” Becca said. In addition to adjusting to life as a family of seven, in the first month Dave and Becca had a few additional, unexpected difficulties. “I had to be hospitalized a week after we came home due to a blood clot in my lung, and a week later, a tree fell on our house! It was a lot to deal with at once,” Becca said. In the midst of the initial chaos, Edwin, Edwench, and Tamara have made amazing improvements. “Their English is already amazing,” said Becca. “They’ve learned so much. Communication has made this a whole lot easier.”

Becca and Dave have also had to learn what each of their adopted children needs to feel safe and happy. The kids are showing signs of attachment and continue to move forward in a positive direction. “We’ve all gotten to know each other better and it’s pretty remarkable how far they’ve come,” Becca said. “I’m very proud of them.”

In spite of everything, 10-and-half weeks later, they truly feel like a family now. “Just the other night, I was tucking the kids in and thinking, how did we ever do this without you? I remembered feeling that with my biological daughters, when they were babies as well,” Becca said. “It’s this feeling of, I can’t believe I ever had a life before you.”

Home for the Holidays