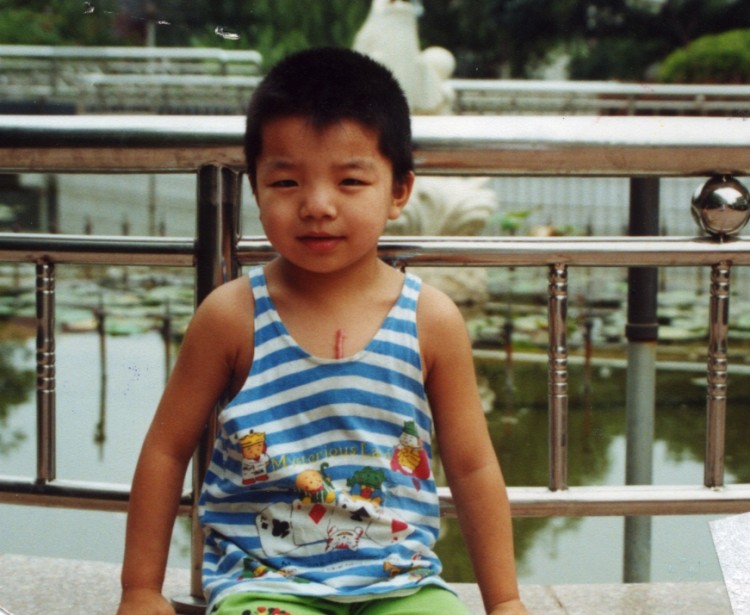 Twelve years ago next week I met my nineteen-year-old son for the very first time.

I remember sitting on the lemon chiffon colored leather couch in the perfectly lacquered and polished greeting room at the Beijing Children’s Welfare Institute thinking, “This is my delivery room. This is where I meet our son.”  But on that morning, in the smog filled capital city of China, I was delivered more than a son, I was delivered a life changing gift.

I remember sitting there, waiting for this rock star to walk into the room when the door slowly creaked open and this little boy barely tall enough to rest his chin on the door knob walked in.  He stood in the doorway briefly and during those few seconds I scanned my new son from head to toe.   He was tiny.  And so frail.   So not the giant rock star persona his thumbnail images represented in my mind.  I looked down at his hands.  His bony hands, where every tendon was a network of ridges, and in those hands he held a simple paper bag the size of a lunch sack.  I looked at that bag and under my breath I said, “Isn’t that sweet.  He’s brought me a gift.”

We were introduced.  He called me MaaMa.  I called him Baoshan.  His smile captured my heart.  I gave him a blue paper bag full of little gifts.  A watch.  Bags of fruit snacks. A matchbox car. Sculpey clay.    Then I coaxed him into handing me the bag he held in his hands. A gift exchange!   The bag was feather weight.   As I began to open it he snatched it back into his hands.  He reached into it and pulled out a sea shell, like one that would house a hermit crab.  Glued to the narrow end of the shell was a red straw cut to about an inch.  He brought it to his lips and blew.  It was a homemade whistle. After he showed me how it worked he carefully placed it back into the brown bag, folded the top of the bag over and put it inside the gift bag I had brought.

He had made me a whistle.

I didn’t think much of his grabbing the whistle and putting it back into his brown paper bag. I thought he was going to hang on to it for me.

I certainly wasn’t thinking like an orphan who had been institutionalized for several years.

Then, not much later, as we were gathering our documents and getting ready to head back to the hotel, I looked around for a small suitcase or backpack or something that held his stuff and I realized he DIDN’T have anything to carry out to the van…no suitcase…no overnight bag…no nothing…and it hit me like a sucker punch to the gut.    That brown paper bag?  The bag I thought I was entitled to because I was coming across the ocean to bring him home?  The one that held the simple sea shell whistle? That bag wasn’t mine. That bag and what was in it was everything that little boy could call his own.

And it was then, at that moment, my entitled world shifted.

I’ve never been the same.

My son.  My nineteen-year-old son who on the day we met for the first time twelve years ago next week couldn’t speak a word of English but in our defining first moments as mom and son I gave him the gift of fruit snacks and he in turn gave me the gift of humility.

This isn’t my first rodeo.  I’ve dropped two of his older siblings off at college within the past three years.  It’s not an easy day for any parent.  But today, today is going to be different because with this son, my beautiful son from China, I carry with me this feeling that I have been cheated out of time. That I wasn’t his mom for seven of his nineteen years.

I can really only find one thing to say that is wrong about adopting an older child and that one thing is time.

It cheats you out of days to love.

Yet, seeing the man my son has become today, his story, our story, could not have been written any other way. He is on the edge of great things because he is the nature of his birth family and the nurture of his adoptive family.

He is the best of both.

He is the gift.

How Teachers Can Help: Is Your Child Safe at School?

Another Miracle at Grace: The Grace Center Foundation Ethiopia