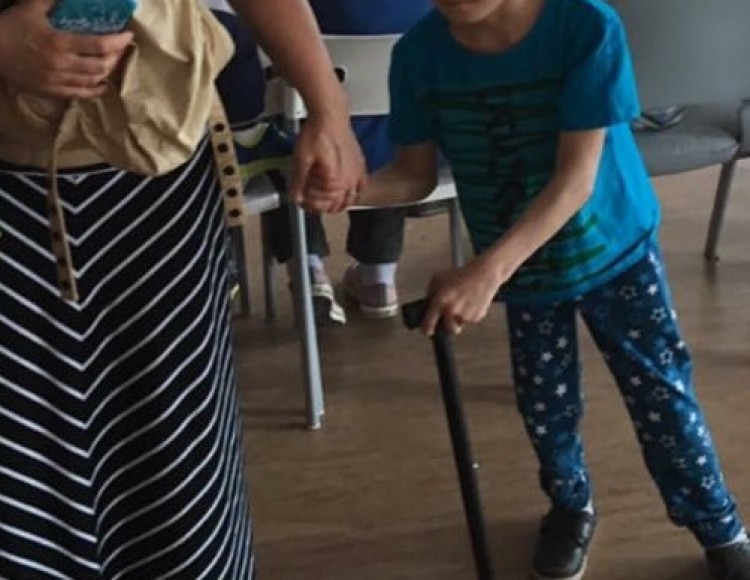 In the spring of 2015, with a new baby in tow, my husband and I visited an orphanage in China.  It was where our son Caleb lived for the first twelve and a half months of his little life.

It was a terrible day. I had been awake the night before horribly sick. Kevin told our guide, Zhou, that he didn’t think I could make the orphanage trip because I couldn’t stop vomiting. Of all the times to get sick.  Zhou insisted that I go. “You can see the doctor there,” he said.  So, I emptied my already-empty stomach one more time before I met them all in the van. It was misery.

Had I been home, I would have been in bed all day. I don’t remember much about the trip. I left the group every 10-15 minutes in search of nearby bathrooms. I recall having a few pictures made with the nannies and Caleb. I remember seeing his empty crib. The rest is a blur that Kevin has filled in for me with pictures from his phone.

There is one memory, however, that stands out clearly.

At one point during the visit, Zhou took us to the music room where a group of older children were singing.  We were able to interact with some of them and take pictures.

I teared up as my guilt rose. I looked around the room of older kids as five couples stood there with our babies. How did the kids feel about us parading around with our cute little ones? Gawking at them singing. Did they feel hurt?

Did they wonder if they would ever be standing beside their new parents in that room? Or was this just so normal to them that it evoked no feelings anymore? I saw a boy who looked to be about 7 years old leaning on a walker. From that moment on, his image was etched on my heart.

Months passed at home, and I still continued to think about the boy I saw.

I knew nothing about him. Not his name, not his age, not his medical condition. I had a single picture of him on my phone that I couldn’t bring myself to delete. We had decided to adopt again, a baby boy only 9 months younger than Caleb. We wanted a young boy who could not only share a room with Caleb, but also share experiences of being a Chinese adoptee growing up in America. The plan was perfect. Except for one thing. The image of the boy I left in China. I prayed daily that a family would come forward for the nameless boy.

Eventually praying for “the boy” wasn’t enough, and I wanted to know his name.

I asked Zhou so that I could pray specifically for him. I wanted to call him by name in my prayers, to be both his heavenly and earthly advocate.

And when that wasn’t enough, I read his file and told “the boy’s” story to Kevin. I just needed people to know him. I told our kids. And my Mom. And my friends. I asked people to pray for him, and I showed his picture to everyone I saw…people at church, people in airports. Even my hairdresser was not safe from my pleas for this child. We teared up together watching videos of him on my phone as my hair color did its magic, and she texted his picture to friends and family.

In the middle of my excitement of preparing to travel to China again, there was also a sense of dread. I knew that I would see the boy, who in my heart, I had named Joshua. How would I stand in the same room with him and walk away yet again? Our adoption agency requested his file so that together we could advocate for Joshua. My heart hurt when I saw his picture online. Where was his mother? Why hadn’t she found him yet?

When we arrived at the orphanage in the spring of 2016, I felt nauseous. I was not sick this time. It was merely my anticipation of meeting Joshua.

We walked into the now familiar music room, me with my newest baby snuggled up against me, and there he stood, this time with a cane. He was wobbly and unsteady, and he looked nervous. I grabbed his right hand to steady him, and I looked him in the eyes and spoke his Chinese name. It was the only thing that I knew to say to him. I have no Mandarin except for “hello” and “I love you” and neither of those were appropriate, so I stood there repeating his name and rubbing the top of his head. We stayed mere minutes, and I reluctantly left, peering back into the music room a few more times as we passed through the hallway. He was gone.

Each stop we made in China took us further from the orphanage, and each mile of distance made it that much more impossible to ever see him again. I posted his pictures in my church moms’ group Facebook page asking, yet again, for prayers for “my” Joshua. I couldn’t let him go.

We returned home and began settling into a routine with five kids. I looked at Joshua’s picture daily and called our agency to see if anyone had expressed interest in him. The answer was no.

I began wondering what would happen to me emotionally if this kid never got a family. And I wondered why I was so hell bent on this kid. I’ve seen hundreds, maybe even thousands, of pictures of waiting children in China, and never once did I ever have such a passion for finding a child a home. I continued my pleas to God. Please, God, lead his family to him. Please, God, may your will be done.

Eleven days after our return home, my phone rang on the way home from the children’s hospital. It was our agency. A family had expressed interest in Joshua. Would I be willing to talk to them since I had met Joshua?

I checked my email dozens of times hoping to hear from them. Maybe they weren’t really interested after all. Then finally, the ding of the email revealed an unfamiliar name. We arranged a phone call, and I stumbled through the conversation, laughing awkwardly and making too many jokes, and being overly excited in general. I was sure I had blown it for Joshua. And I was sure his “maybe mama” would never contact me again. In the end, there were several hurdles and obstacles that could have prevented them from moving forward for this sweet boy, but those are not my details to share.

Thankfully, I didn’t scare her away. Joshua’s “maybe mama” and I texted back and forth numerous times over the course of the next few weeks. The pros and cons of China adoption. The older child factor. Tidbits about our families. The more I got to know this girl, the more I liked her, and I tried so hard to choose my words carefully so that I didn’t sound pushy about the decision that was ultimately her family’s to make. But with each text talking about our trust in God and each “Me too!” moment that we shared, I wanted more and more for her to be Joshua’s Mama. We had many conversations via text, and at one point, I sent her a pic of a double rainbow at our house. I added a comment to the picture: “Double rainbow. I’m taking this as a message that J is gonna be ok.” (God had given me the gift of many double rainbows at different stressful points in my life. It’s like he was telling me, “Look, it’s gonna be ok. It’s a real promise from me. See how I threw in that extra rainbow for you? I’ve got this!”) A few days later, she sent me a picture back of a coloring book she had. She said, “I was coloring away on the first page while hubby was building flower boxes. He looked down at me and pointed out I was coloring rainbows.”

A few nights later, I dreamed about rainbows for what seemed like the entire night. It wasn’t just boring ordinary faded rainbows, you know, the ones that you have to strain to see. Somehow these were rainbows in the absolute pitch black. The colors weren’t just ROYGBIV, but every perceivable shade in between. I could see the end of the rainbow at my feet, and it was so bright it was like I was staring into the sun. God was sending a big message. In my dream, I had to look away.

The next morning, Joshua’s “maybe mama” sent me a text of her doctor’s medical review of Joshua. It was very positive, and it made me cry. My emotions were all over the place: joy that he potentially had a family; relief that he wouldn’t age out of the orphanage system and be left on his own; and strangely, loss because he wouldn’t be my son. I stood in the shower before church ugly crying about a child I had pictured at our kitchen table eating birthday cake. I had pictured him at baseball games with us, cheering on one of his many siblings. I had pictured him on vacation with us, seeing the ocean for the first time. I had mentally removed the furniture from our first floor office and turned it into a bedroom for him. But, he was not our child.

A little over three weeks after our first conversation, my phone rang. It was “maybe mama’s” name that popped up. This was big because we hadn’t spoken on the phone since my awkward emotional vomit about a kid I barely knew. I was terrified to answer because I knew in my heart what this call meant; they had made a decision regarding Joshua.

I am so thankful to announce that they said YES to Joshua.

Her family is quite literally the answer to over a year of prayer. And, wow, oh wow, how good God is. Not only does Joshua have a family, but he has a family that I now semi-know, and I call his mother a friend. God isn’t just good. He is freaking fantastic. From what I know about Joshua’s soon-to-be family, they are a tight knit family who firmly believe that they were called to love Joshua. I hope his mama shares her story about how God used roadblocks and delays, pain and trials to eventually lead them to their son in a land they had never considered. It is such a powerful story of patience and faith and of truly hearing God’s direction. Most of all, I can’t wait to see Joshua thrive in his family. I have pictured him at their kitchen table, and the image is beautiful.

1 John 5-14: This is the confidence we have in approaching God: that if we ask anything according to his will, he hears us.

I wish I could personally thank every person who has prayed for God’s will in Joshua’s life. I pray that he has felt it, even though he may not recognize yet where the peace came from. I pray that his mother tells him this story, so that he knows that even when he may have thought he was alone, he had so many on the other side of the world rooting for him.

Cheering his story on.