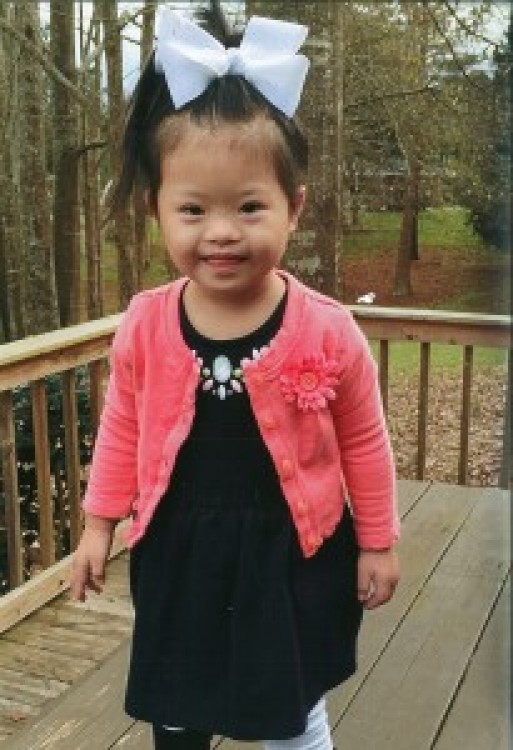 Kandace had always had a heart for people with Down syndrome. While her husband, Juan, had never spent time with children or adults with special needs, he quickly warmed up to the idea when they met an adorable little girl with Down syndrome on vacation.

“She just loved him! She only wanted to play with him. And it just opened his heart. He saw that Down syndrome was not this scary thing,” Kandace said. Little did they know, God had other plans! One day in September of 2014, Kandace’s aunt, an active member in the adoption community, sent her a photo of 2-year-old Penny, who has Down syndrome. “I just thought oh, she’s so perfect, there’s just something about her,” Kandace said.

While she worried that they wouldn’t qualify, she decided to pray on it. “I wasn’t yet 30 and I thought that you had to be pretty wealthy to adopt from China. I also didn’t think my husband would be on board,” Kandace said.

After showing Penny’s picture to her husband, it was soon clear that she was their daughter. “He said oh, she’s perfect. If we were in the process we would definitely move forward with her,” Kandace said. “And then a few days later he asked to see her photo again. I showed it to him and he said, that’s our child. We need to go get her.”

What followed next was a whirlwind of an adoption journey! After contacting AGCI about Penny, Kandace waited anxiously to hear back if the other families who had inquired about Penny would move forward.

“There were a few people ahead of us who had inquired about her, but nothing was decided yet,” Kandace said. “I bugged AGCI to death over the next few days, asking why it was taking the other families so long to make up their minds—we already knew she was our daughter!”

Once they received the good news, the Kandace and Juan jumped in headfirst! Their entire adoption process was completed in 10 months and they traveled to bring Penny home from China in July 2015.
Since arriving home, Penny has been, “such a blessing. I have two older children and she is the easiest child! She doesn’t throw fits and she sleeps through the night. My other children have just fallen in love with her,” Kandace said.

While the journey has been smooth, they did have initial concerns. They worried about the cost of therapy, how they would communicate, and what Penny’s delays might be. Happily, all of their concerns were quickly resolved upon bringing Penny home. “When we met her for the first time in China, she was wasn’t yet walking. It was soon clear that she would walk, she just hadn’t done it yet. She picked up walking pretty quick and now she’s running around,” Kandace said. “We also now have her in a program that’s completely free—it provides all the therapies that she needs—speech therapy, occupational therapy—everything.”

Another concern that Kandace and Juan had was about Penny’s ability to communicate. “Within a few weeks she was understanding simple commands and now she understands pretty much everything we say. She isn’t yet speaking words or sentences but she can understand,” Kandace said. “We’ve also incorporated sign language and she can ask for something to eat or drink. It’s really neat to see that you don’t have to have speech to communicate.”

At the end of the day, Kandace wishes she hadn’t worried so much. “She’s just like any other toddler. She has the same likes and desires as we all do. I knew this before we adopted her, but I didn’t really get it,” Kandace said. “She’s really just like anybody else. I think a lot of families miss that—they think they’ll have to support them forever. And they may, but it’s not already decided. There are kids with Down syndrome that go off to college. Whatever she wants to do, we’ll encourage her, just like our other kids.”

If she lives with us forever, that is perfectly ok. And if she decides to go off on her own? That’s perfectly ok too,” Kandace said. “I really wish everybody could have a child like Penny. She is such a joy.”

Click on the image below to view over 400 children with Down syndrome waiting for their forever families!

Home for the Holidays