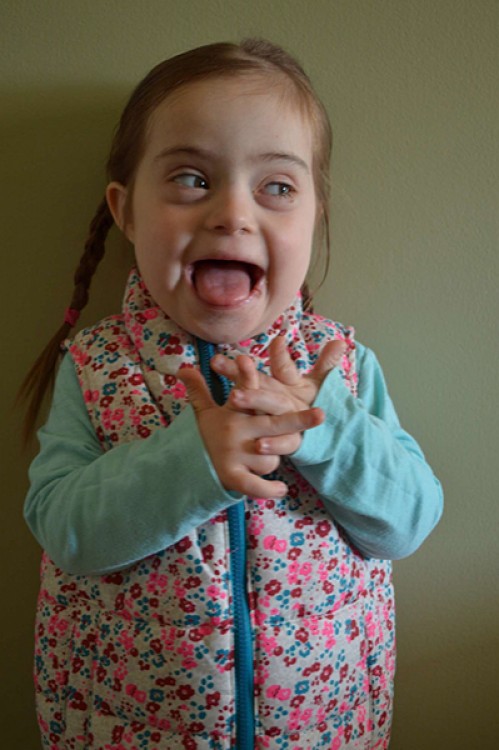 In Bulgaria
Alaina spent the first two years of her childhood in a large orphanage in Bulgaria. From infancy, she didn’t know the two resilient people who’d become her parents or the name they’d give her — Alaina Hope, which means “beautiful light of hope.”

Alaina was born in October 2012 with Down syndrome, and came into care early. Her “baby home” (an orphanage for younger children in Bulgaria) was large, with more than 100 children. And she was one of many who needed support from the orphanage caregivers — who were as stretched as they were dedicated. As familiar as the baby home became to Alaina, it still wasn’t easy. At such a critical period of development, she needed a home that was stable, care that was focused, and the regular engagement of a family. She needed a family’s love.

In the U.S.
In spring of 2013, when Alaina was about 5 months old, one U.S. couple was feeling pulled to add to their family through adoption, and reached out to WACAP to learn more. Once Ashley and Anthony began the process to adopt from Bulgaria, they started to think seriously about the special needs their family might be open to. Ashely remembers, “There were certain special needs that we felt completely ill prepared to handle. There were also some things that we realized for the first time, that we would be open to.” Talking with other families and WACAP staff, and through their research, they discovered Down syndrome was a need their family could support. By the year’s end, they’d completed their adoption paperwork for Bulgaria, and by the spring of 2014, Bulgarian adoption authorities had matched them with a little girl, their “beautiful light of hope.” By then, Alaina was 18-months old. She’d spend over six more months in the orphanage, as Bulgaria’s summer and holiday office closures would temporarily pause adoption processing. Anthony and Ashley knew about the annual closures, but waiting to hear when they could travel to bring their daughter home was still hard, especially when she needed a family “yesterday.”

The couple was overjoyed to welcome their daughter home in November of 2014, but even with the celebration and outpouring of love, there were challenges. The effects of institutionalization on Alaina were overwhelming, both for her and for her family.

On the physical side, the 2-year-old could hardly sit up on her own or bear any weight on her legs. Crawling a few paces exhausted her. All the foods she ate needed to be puréed.

On the emotional side, Alaina hadn’t developed a solid foundation to build trust and secure attachments. She wouldn’t accept the love her parents were trying — and had longed — to give her. She preferred being alone, didn’t want to be touched, and withdrew at her family’s attempts. Her mom reflects, “The first several weeks were painful to watch … Everything caused sensory overload, to include our snuggles and attempts to break into her world.” After waiting to bring their daughter home, then waiting to be able to engage, then to attach, their hearts were heavy.

“It’s hard for any parent — and it was hard for them — to have be ready for moments like that,” notes their case manager Tami Mason. “They understood the impact of institutionalization, and prepared in advance, but as parents, they just wanted to comfort their daughter. She just couldn’t receive it as they wanted give it.” While the adjustment period was difficult, Ashley and Anthony didn’t give up. They were both practiced in caring for others, Ashley, as a nurse and Anthony, an associate pastor. There was no question that it was tough, learning how to be resilient for a little girl that needed their love — both when she pushed it away, and when she didn’t.

They found the answer lay in staying afloat, supporting each other, and embracing the support around them. Their case manager and WACAP’s social services staff stayed in contact with them after their adoption. Their church community, their friends and their faith held them up. Things began to improve as Ashley and Anthony worked to understand and anticipate Alaina’s cues, and shared how to do that with Alaina’s new siblings, Adilyn and Anderson.

“A huge turning point,” says case manager Tami Mason, “came when Alaina began seeking out her mom when they were at church, for instance. It was a big moment, because it signaled her growing attachment, and that she understood it.”

Buoyed Up, By Family

Even though the adjustment was hard, the family’s love and commitment was a buoy for Alaina. Her parents explain how: “We have had to demonstrate to her the powerful motivation that family can be. She knows that she has a huge team of cheerleaders now.”

And that “family motivation” has transformed Alaina’s life. The once withdrawn girl who couldn’t be comforted now laughs, kisses her family, and dances with them. She’s walking on her own, and will attend a pre-school class this fall. She is signing to communicate little by little — and with a growing fondness for music, she is singing quite a lot, both in music therapy and in a kids’ choir.

Supported by a team of therapists, her parents, and her siblings, Alaina is joyfully learning what she can accomplish. Her brother and sister are thrilled to celebrate her achievements and empower her further. The family together has a renewed gratitude for things they’d taken for granted. Alaina has lifelong advocates.

And her parents, fortified by the support around them, and their commitment to each other, recall the words of Mother Teresa as they think about the past year with Alaina Hope: “A life not lived for others is not a life.”

View the hundreds of children with Down syndrome waiting for their forever families by clicking on the image below.