Our Hosting Story: Doubling in Size! 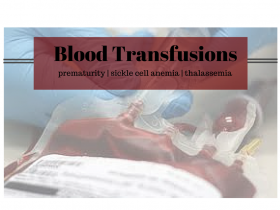 There are three different types of cells that circulate in the bloodstream, and the majority of these cells are produced by the bone marrow, a specific part of the bone. Cells include:

1) White blood cells (WBC) which are needed to fight infections
2) Red blood cells (RBC) which carry oxygen and
3) Platelets which are essential to help people stop bleeding when they are cut.

Blood transfusions contain a specific blood cell type that is given to a person to replace cells that have been lost or are not being adequately produced. Most commonly these transfusions consist of either RBC’s or platelets. Very rarely, a transfusion of WBC’s may be given. In this section, the focus will be limited to RBC and platelet transfusions.

Transfusions in the USA are considered very safe. There are theoretical risks of getting an infection from a transfusion, but these are very uncommon. Safety measures screen for major viruses such as hepatitis B, C and HIV. In the USA, the risks of transmission of these viruses are low (1 in 220,000 for hepatitis B, 1 in 600,000 for hepatitis C and 1 in 800K for HIV1,2). Specific statistics do not exist on the transmission risks for all intercountry adoption countries. However a recent quality check in 6 centers in Sub-Saharan Africa showed 98% sensitivity for screening for HIV, 90% for Hepatitis B and 94% for Hepatitis C.3,4

It is also possible, though rare, to get other infections for somewhat lesser recognized illnesses such as prion diseases, other viruses, malaria and other parasitic infections. However in many countries where malaria is endemic, it would be very difficult to determine whether malaria was transmitted through a blood product or from the environment.

In older children, sometimes they stop producing enough cells from their bone marrow because of vitamin deficiencies, autoimmune disorders, cancer, infections, or bone marrow failure syndromes. There are also certain diseases where cells have a shorter than expected lifespan once they are in circulation. Sickle cell anemia and thalassemia are two examples of this. If the child has already needed a transfusion(s) due to the fact that they do not have enough red blood cells or platelets then they will likely require further transfusions. These can vary in frequency from transfusions every few weeks or month to more infrequent transfusions. The more often someone is transfused the more likely they are to experience complications. Kids who need a lot of transfusions can have reactions over time which may cause injury to their lungs, fevers, strong immune system responses, iron overload and allergic reactions.6,7 Because of this, it would be important to determine the interval at which transfusions would be required prior to adoption to be able to set realistic expectations for the family and child.

Summary
* Not common in international adoption referrals
* Blood products are screened in almost every country and are reasonably safe
* Most common transfusions in childhood occur because of prematurity OR because the body is not able to make adequate amounts or the correct type of part of their blood.
* Clarifying the reason and frequency for the transfusion is the most important factor to determine prognosis and long term health needs.

This article was generously shared by Dr. Judith Eckerle of the University of Minnesota, Adoption  Medicine Clinic. Child referrals are becoming increasingly complex, and adoption medicine professionals are identifying many more children with special needs from all countries that participate in intercountry adoption, as well as from the United States. To help families prepare for these changes, Dr. Eckerle and other medical specialists are writing a book: Health Topics For Preadoptive Families.

Serving the unique medical and developmental needs of children living without consistent parental care and children who join their family though adoption.

the sea in our blood