What is a Primary Provider in International Adoption? 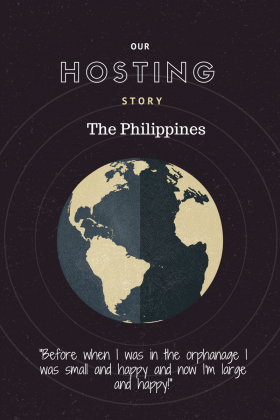 Our Hosting Story: Doubling in Size!

This summer we hosted four Filipino siblings in preparation for adopting them. We are Michael and Theresa, and this is our second time to adopt. In April 2012, we became instant first-time parents to two lovely sisters, ages 17 and 12. In the two-plus years that we have been their parents, we have had many ‘ups’, a few ‘downs’ and have blended into a very grateful and blessed family.

Always open to new life, through birth or adoption, we knew we were called to adopt again. We wanted siblings and needed children who would be compatible with our now 19- and 14-year old daughters.

After much careful consideration, we found our answer in not two, or three, but FOUR more kids! Although this wasn’t our original plan, it was hard to miss one particular sign.

The children had been brought to the orphanage on the very same day that Michael had first introduced himself to Theresa with the intention of a possible courtship and marriage.  So in June of 2014, we welcomed three girls, ages 15, 14 and 11 and one boy, age 12 (now 13), into our home for a month-long visit. Our main purpose in hosting them prior to adoption was to lessen the culture shock for them before being permanently placed in a new home, family, and country. We were also unclear about their English proficiency, so we wanted to give them time to experience the American life and get more comfortable with us before (hopefully) becoming a family.

These are just a few fond memories of their visit:

- Coming off the plane and into the airport, hearing one of our ‘soon-to-be’ daughters ask “Where is the snow?”, in Indiana, mid-June

- Teaching them a little MORE about American money during a last-minute surprise ice cream trip with $20 to spend on the whole gang... and seeing them enjoy their ice cream!

- Watching them become our ‘neighborhood ambassadors’, introducing us, through their friendliness, to nice neighbors we had never met

- Seeing our ‘soon-to-be' son feed a little boy at a family picnic, carefully offering him bites of food while holding him gently with his other arm

- Learning from this 'soon-to-be’ son that 'Before when I was in the orphanage, I was small happy, but now I’m large happy!’

When we asked the kids what they thought about leaving, their answer was mostly unanimous:

“We don’t want to leave, but we’re excited to fly in the plane!”

And soon, they will be flying again, to come home for good. We will be traveling to the Philippines to bring them home and begin life as a family, doubled in size!