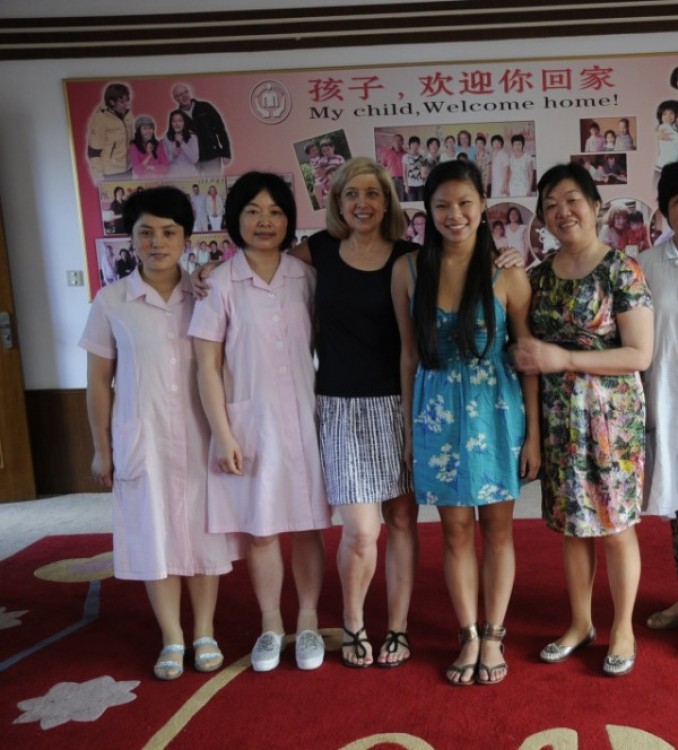 I woke up with a slight case of the nerves the morning of our scheduled visit to the Changshu Social Welfare Institute, aka “Juliet’s orphanage.”

Juliet, on the other hand, was cool as the proverbial cucumber. Dressed in a festive green flowered sundress with her long black hair spilling down her back, she looked simply eager and happy.

“I can’t wait to see the babies and kids and play with them, the way we did at Alenah’s,” she said.

Two hours later, we arrived in Changshu, a city of 1.1 million people. Minutes after we arrived in the city, our driver pulled up to the gates of the SWI. A low-slung building made of light-colored stone, the orphanage looked tidy, neat and friendly. (Note: This was my first visit to the orphanage, too. Back in 1994 when we adopted Juliet, some orphanages did not permit adoptive parents inside, so I had met my daughter for the first time in a hotel room in Nanjing.)

Accompanied by our translator and guide, a Nanjing resident who used the English name “Savor” (she said it had the same meaning as her Chinese name), we entered the orphanage’s cool, shady foyer and were greeted by several officials.

When Savor told them who Juliet was – that she had been cared for as a baby there, and was adopted at the age of 6 months in 1994 – they became very animated and smiled. They eagerly looked at a photo album I had brought, filled with photos of Juliet as a baby being held by her orphanage ayi and surrounded by several orphanage officials. (I had taken this photo during adoption proceedings in China in December 1994, at the hotel.)

The current orphanage director, a kind-eyed, middle-aged woman in a colorful flowered dress, told us she worked at the SWI back then, and that Juliet’s ayi had retired a few years ago. No one had any personal anecdotes about Juliet: clearly, too many children had come and gone for them to remember one female child who had been cared for there for five months back in 1994. It was good enough, to us, to meet some people who had been there when Juliet found herself in their care.

The director invited us to go outside to the courtyard playground, a large, rectangular area covered in green indoor-outdoor carpeting, where the children were having their playtime. As soon as they saw us, the 10 children (ages four to about 14) stopped dead in their tracks and stared.

Thinking fast about how to best make friends with them, Juliet asked Savor to ask the director if we could give the children some lollipops that we brought. She was told it was OK, and we handed the treats out to the children, all of whom are considered “special needs.”

In the years since Juliet’s adoption, this orphanage, like many others, has converted to one caring for children with a range of issues, from Down syndrome and cerebral palsy to blindness, deafness and heart disease. We were told that the supply of healthy girl babies has dwindled, due at least in part to the central government’s slight relaxing of the One Child Policy, combined with the fact that many young urban Chinese of childbearing age don’t want to have more than one child. Now, most of the children who are found abandoned have special needs like the ones we were seeing.

Within minutes, I was playing a rowdy game of catch with four children (one absolute pixie of a girl with flashing eyes and achondroplasia kept stealing the ball from me and running away!) and Juliet was in the center of a crowd of six or 7 others, taking photos and showing the kids how her camera worked. Every time I looked over, a different child was in her lap!

The kids didn’t know English (except one clever boy who kept saying “Thank you!” loudly and clearly) and we didn’t know much Chinese, but the universal language of play, smiles and eye contact got us through OK. A half hour later, when it was time for the kids to go back into the classroom, we felt like good friends and were sad to part.

Next we visited the nursery, where Juliet held a very chubby baby boy who did not want to get back in his crib afterward.

Then we were escorted to a lovely luncheon with the director and several nurses, all of whom kept urging us to eat more. (My ego demands that I mention here the director’s amazement with my deft use of kuaizi, or chopsticks!)

In addition to a delicious fish and lots of rice, we were served chicken and zongzi (a huge lotus-leaf-wrapped, dense rice dumpling traditionally eaten at Duanwu, or the Dragon Boat Festival, which fell this year on Juliet’s birthday, June 12.) During the luncheon, Savor helped us communicate with the director and the ayis, and we learned more about the children and their challenges (One little girl has a cancerous tumor in her eye, and needs surgery badly). The director also invited Juliet to come back “anytime, a lot” and live at her house for as long as Juliet wanted to stay.

The visit ended with Juliet being given a beautiful glass desk ornament by the director and a hearty round of picture taking.

That evening, I asked Juliet how she was feeling about the visit.

“I loved playing with the kids and getting to know them, but seeing the babies in their cribs just lying there made me sad,” she said. “It doesn’t seem real that I was once one of those kids.”

Tomorrow, in Part IV of Back to Where She Once Belonged Juliet and Lisa discover the truth behind the day Juliet was found as they visit her Finding Place.

More on Juliet and Lisa's time in China:

Back to Where She Once Belonged Part II

Back to Where She Once Belonged Part IV: The Finding Place