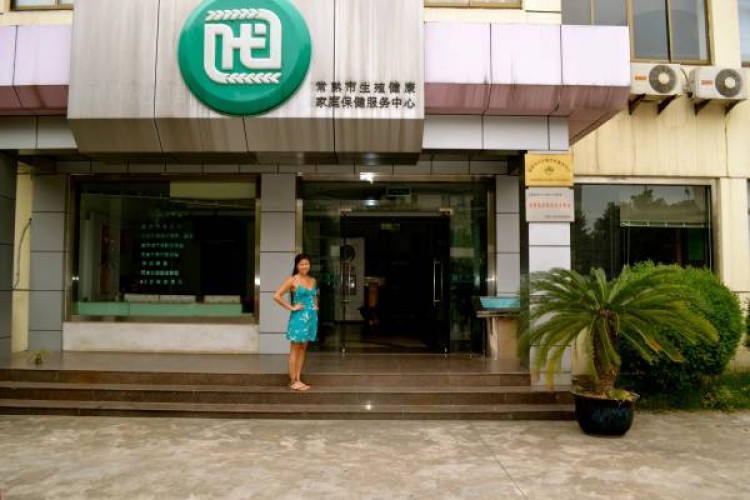 For years, we’ve had the story wrong. I am not sure whether I heard it wrong or the original information I was given was in error.

Let me back up: The day I met my younger daughter in a hotel room in Nanjing, China in December 1994, I swore I was told by our translator that the baby was “found by a police officer at a station and taken to the family planning clinic. They then took her to the orphanage.”

But, apparently, that’s not what actually happened.

When Juliet and I visited her orphanage on our recent trip to China, at one point the director sat down with us and opened Juliet’s file. (We had sent this special request through our contacts at Children’s Hope International months before arriving and were assured looking at the file was no problem.)

Through Savor, our translator, we were told that one-month-old Juliet was found by workers one early morning in July 1994 at a women’s health/family planning clinic, and was taken from there to the Changshu Social Welfare Institute, from which we adopted her five months later. Not a single station (bus or train) or police officer involved! (I am embarrassed to confess that it took me until earlier this year to discover, online, that Changshu doesn’t even have a train station!)

As Juliet and I recovered from our surprise, the director gave Savor and our driver the address of the clinic, and we headed out.

On the way, I once again found myself feeling a little nervous. What would the place look like? How would Juliet feel when she saw it? Would we both dissolve in tears, knowing we were staring at the spot where she was left by her birthmother one summer morning?

We got those answers very quickly, as the clinic was not far away. On the way over, Juliet and I held hands in the backseat of our driver’s car and didn’t say much. Instead, we peered out the windows, both lost in our own thoughts.

About 10 minutes later, the driver pulled into the driveway/parking area of a large, modern, sand-colored building with brown marble steps and an aqua sign saying??? Shidai Family Planning Service. We hopped out of the car, and Juliet and I looked around silently. We immediately noticed that in order to pull into the parking area in front of the clinic, we had driven through an open metal accordion gate and past a little guardhouse.

Juliet and I were walking over to it when a middle-aged woman wearing worn jeans and a flowered blouse came out of the clinic’s front doors, curious about who we were and what we wanted.

Speaking Chinese, Savor explained and a big smile broke out on the woman’s face. Apparently, this woman worked at the clinic back in the summer of 1994, and remembers “a few baby girls being dropped off here.” She proceeded to tell us that birthparents would wait until dark and then climb over the gate (closed and locked at night, and much higher than the one there now) so they could place their babies carefully up on the steps of the clinic’s front door, safely away from passersby on the street and any danger. “We would find the babies when we came to work in the morning,” she said, through the translator, “and bring them to the orphanage.”

Juliet asked me to take her photograph with the woman, and commented afterward “Is it weird that I am smiling? I just feel like smiling knowing this lady was there when I was found!” I told her that there were no “shoulds” when it came to her feelings. I snapped a few shots of the worker and Juliet, as well as some of Juliet in front of the building. Then I handed the camera to Juliet, and she took a few for herself.

I admit that I had a feeling of unreality while clicking the shutter: It was almost impossible to envision my daughter, now a beautiful, healthy and strong 19-year-old, as a helpless, month-old baby wrapped in a blanket and left on that stone step landing. The disconnect was just too much for me.

And later that evening, over dinner, Juliet told me that she felt the same way.

“I am glad that I got to see where my parents put me, but honestly, Mom, it doesn’t seem real,” she said. “One thing that made me feel good was hearing that she climbed over that high gate to make sure I was safe. All this time, I was picturing myself on a train station platform, with lots of people just walking by, maybe not caring or even not seeing me. At least, this way, I know they wanted me to be safe and go on to a better life.”

Tomorrow, a very special essay written by Juliet about her how her journey back to where she once belonged has changed the course of her life forever.

Read more of Juliet and Lisa's travels in China:

Back to Where She Once Belonged Part III: The Orphanage

To Connect and Be Loved...