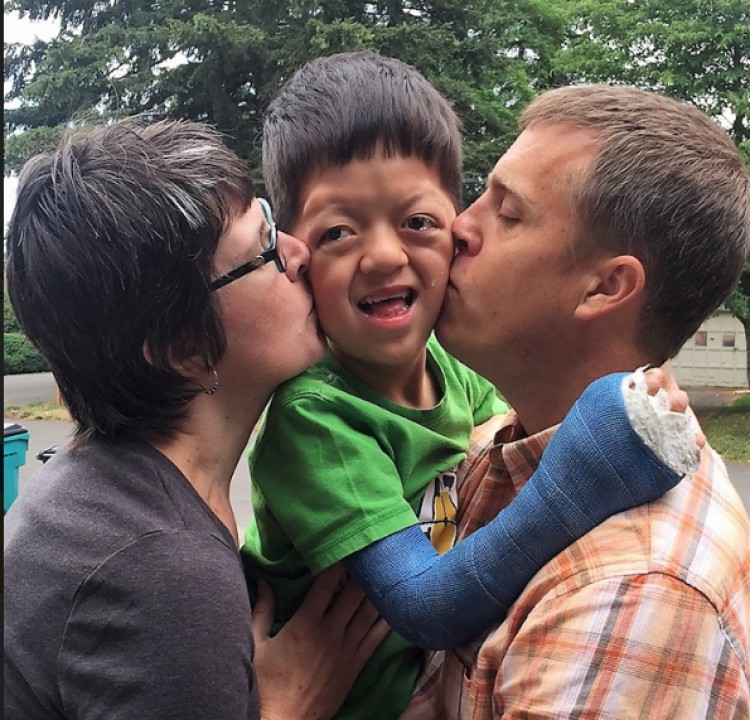 Two years ago, Kelly and Charles (Chuck) would have told you their family was complete. The couple had adopted two daughters from China, the first in 2008 and the second in 2010, and they were living a full and satisfying life.

That is until they became involved with a young boy in China who needed both medical care and a family.

Kelly and Chuck learned of CJ through Kelly’s connection to Grace & Hope for Children (GHC), an organization that seeks sponsors to pay for foster care for orphaned and abandoned children in China. Kelly joined GHC as a volunteer after adopting their first daughter, who had benefited from a loving foster family.

At GHC, Kelly helped match sponsors with children, and it was in that capacity that she learned about CJ as an infant. Born with a disorder called Apert Syndrome, CJ had been left by his birth parents when he was born. He bore the trademark signs of his condition, including an altered head and face shape due to premature fusing of his cranial bones, and fusion of his fingers and toes.

Despite these challenges, CJ was by all accounts a smart and happy child, which made the news that he couldn’t go to kindergarten because of his appearance very hard for him to bear. It was also hard for Chuck and Kelly to hear. “That’s when it became personal,” Chuck says.

“Every signal indicated he was very capable. It wasn’t a cognitive issue. It was that he looked different. He was engaged with kids in his neighborhood, and when they went to school without him, he was crushed.”

The news spurred a board member of Grace & Hope for Children to begin exploring medical care in the United States to mitigate CJ’s skull and hand conditions. After lining up a medical team on the East Coast who could perform the specialized surgeries he would need, GHC also obtained permission from the Chinese government for CJ to travel to the United States to receive the care. The only caveat – he had to return to China once the surgeries were complete.

Kelly and Chuck became further connected with CJ as Kelly lent a hand with social media, advocating on CJ’s behalf through Facebook. A growing sense that this might be something more for them began to take hold, especially since they were familiar with pediatric medical issues as their first daughter, while adopted through a healthy baby program, was later diagnosed with an illness that required specialized treatment. Based on that experience, the couple felt confident they had the knowledge and resources needed to manage the care of a child with medical needs.

Soon after CJ arrived in the United States for his surgery, Kelly and Chuck met for lunch. As their conversation spun toward CJ, they each spoke what was in their hearts. “We said ‘we need him as much as he needs us,’” Chuck recalls.

Adopting CJ would not be easy, however. The Chinese government had made it clear that CJ was expected back in China after his surgeries. He also would need ongoing medical care.

Grace & Hope for Children put Kelly and Chuck in touch with The Barker Adoption Foundation and Betty Betz, Barker’s International Programs Case Manager, an expert on children in China with medical needs. An adoptive parent of an older child from China with special needs herself, Betty is known as a force when it comes to expediting the adoption process for children in need of medical care.

In CJ’s case, time was of the essence so he could receive ongoing medical care following his surgeries. “Betty was a godsend. She didn’t make any promises or set any expectations, but she was willing to dive in very quickly and she did. She understood the urgency. If CJ fell and injured his head while in China, he would not have access to the medical care he would need to recover,” Kelly says.

Just four months later, Kelly, Chuck and the girls were on a plane. “We arrived on June 4th  and were able to adopt him just four days later on June 8th. The girls came with us so we could spend some time in China together and within just a week, all three kids were bonding with each other,” Chuck reports.

Now home in the United States for more than a year, CJ has just completed his first year of school. After four additional surgeries and services by 15 different specialists, he’s settling into a pattern of routine six-month medical follow up visits. “He’s done so well, despite the transition and surgeries. When you consider how far he’s come, it’s much further than any of his other kindergarten classmates.”

CJ, now seven-years-old, will enter first grade this year. “He loves his toys and his sisters,” Kelly says with a smile in her voice. “He’s a trooper. He doesn’t let anything get us down.”

DON’T GIVE UP A POTENTIAL BLESSING

Kelly and Chuck say families who are wondering if they could be open to a child with medical needs should know that “medical science is amazing.”

“If you have access to medical resources, so much is possible. Don’t give up a potential blessing because of the fear of the unknown. Take the time to find out what options are available to you. There are so many children out there who need a home.”

To learn about other children with Apert Syndrome and in need of families, go to the FaceBook page at:  www.facebook.com/groups/ApertSyndromeAdoption

There are children with Apert Syndrome who are currently waiting for adoptive families!  Visit them now on our waiting child area!

Whittingham is Joy. He is Hope. He is Love. Please Help Him Find a Family!