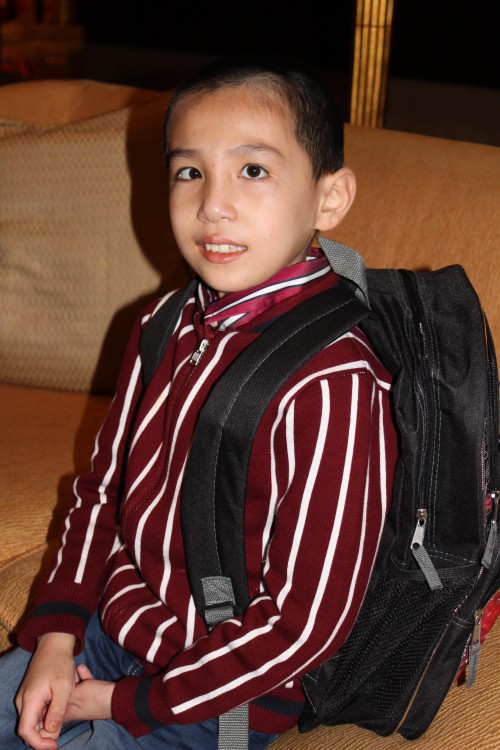 UPDATE 2/10/2017:  We are thrilled to share to wonderful news that Wittingham has a family! Thank you to all who advocate so children like Wittingham can be discovered!

I can still hear these words in my head and remember exactly how he says them. Every time I took my camera out, he would yell this phrase loudly and throw his two fingers up in the air in “V” and put them right in front of his face as a snapped a picture.

I met Whittingham (RK#35257) at Children’s House International’s (CHI) winter advocacy camp in Wenzhou. We had 18 kids and 18 advocates attend the camp and he was my buddy for the five days we were there. He’s eight-years-old and will turn nine in February 2017.  His special needs include epilepsy, left-sided hemiparesis, strabismus, and developmental delays.  He was abandoned around the age of two. His file was prepared over two years ago and in those two years he has been overlooked by many families for adoption for whatever reason. He attended this year’s winter camp because CHI wasn’t able to find a family for him in the past when his file was prepared, and after making the rounds with other agencies he still had no family.

But, wow. This kid is one of the friendliest kids I have ever met. He says “thank you” and says “hello” to everyone he meets. Every time we were in the elevator he would say “hello” to the other people and start telling them about his day and where we were off to next. At one particular restaurant, as you were leaving, you walked down the line of all the chefs, and he waved and smiled and told each of them “hello” and “goodbye” as we walked out. Everyone that met him for even a few moments couldn’t help but smile at his sweet spirit and kindness.

His seizures are definitely his greatest special need at this time. He is currently taking three medications for his seizures, but that medication is not controlling them. I witnessed at least five seizures every day that I spent with him. They were all very minor and came and went before most people would even notice them. I noticed them most often when it was time to eat. That is because when he would have a seizure his head would drop onto the table and then he would immediately pick it back up – typically only one second from start to finish. So it’s very possible he had more than five a day and I just didn’t catch them because they were so quick. The doctor at his orphanage said he had recently been in the hospital for a month to change his medications and observe him. She said his seizures have greatly improved since this month-long stay in the hospital. Even with his left-sided weakness, Whittingham is a fairly normal boy physically. He can walk, run, jump, dance, color, feed himself, use the toilet, and put on clothing/shoes. When asked to use his left hand, he completes a task much slower than with his right hand, but he can do it. He seemed to really enjoy coloring with crayons and markers, but his coloring skills are very far behind. He would draw circles around the paper and not color inside the lines at all. When asked to count a few objects in front of him, he could not. These are areas of development that concerned me, but with how well he memorizes songs and poems and how good his fine motor skills are, I’m not sure why he is behind in these areas. On Thanksgiving, he participated in a performance that included singing and dancing and while he was a little behind the other children on the movements occasionally (he had also been in the hospital for the past month before attending camp, so that could have been part of the reason), he belted out each song like he was on American Idol.

Whittingham found adventure and joy in every activity that we did during our time together. Simple things like playing with a balloon in the hotel room, to riding in a shopping cart at a Chinese Walmart, to getting to pick his own food at the hotel buffet. I truly got to experience a lot of “firsts” that adoptive families typically get to experience. I got to see what a potential adoptive family would go through in their first five days with him. I saw joy. I saw hope. I saw love. I saw excitement.

Before I left, his nanny from his orphanage begged me to help him find a family. She knows this child and she knows how eager he is to please others and make friends. She knows how other kids/adults can be bullies and take advantage of kids like him. She’s afraid of what will happen to him if he ages out and never has a family.

He called me “mama” for five days. At first, it was hard to hear. I told him to call me “ayi” (aunt) instead. But he constantly reverted to “mama” when he was calling for me. He’s longing for his “mama”. It was very clear. He had so much joy in his voice when he would call out “mama”. And every time he would say “xie xie mama” (thank you, mom), my heart would break a little. This little boy deserves a family. He needs a family. He needs someone to love him and protect him. Are you the mama or the baba that he’s longing for?

For more information and to request this child’s file, email Nina at CHI.

To contact this child’s camp advocate, email Amanda at The Lily Project.

Adopting Our Son with Apert Syndrome