A Son Who Almost Wasn't 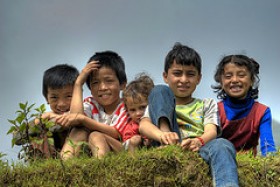 To Be Frank: Nepal Adoption

Today I opened the “about us” tab on the website of Frank Adoption Center of North Carolina and there at the bottom of the list of board members is an almost not embarrassing photograph of me with a blurb explaining my accomplishments. What it doesn’t explain is what an accomplishment and point of pride it is for me to join this organization.

Frank is the only agency working in Nepal right now to allow prospective adoptive parents to adopt waiting relinquished children. It is the only agency working to reopen Nepal for abandoned children. And yes,  there are many sitting and waiting for families. The United States shut down adoption for abandoned Nepali children in 2010 – just as my daughter’s visa was about to be processed.  It took almost a year and lots of money for private detectives and lawyers but we were able to prove that despite what the US government implied -- my daughter and all the other children stuck in the shutdown were legally eligible for
adoption by US families.

Despite this, the US has not lifted the suspension and children sit.  The orphanages are jammed from consolidation or just completley being disolved creating more street children. Infanticide is on the rise. US agencies backed out of Nepal, unsure if they could count on visas, even for the relinquished children who never fell under the unfair ban’s umbrella.

Kelly Dempsey and Mary Beth King saw what was happening and began discussing opening an agency that would help those children find their forever families. They quickly learned that North Carolina licensing regulations make that nearly impossible. Then they heard that an agency called Frank Adoption Center, in North Carolina that had a Russian adoption program that was closing because of the ban. All their licenses and accreditations were current, so Kelly and Mary Beth approached them about absorbing some of their debt and reopening the agency. North Carolina did not allow them to change the name, but with a brand new staff, new board, and new programs, the new and greatly improved Frank Adoption Center is going to live up to its name.

Above board, open, sincere, and honest the new Frank Adoption Center is willing to push through the red tape of complicated countries and push the US Government to make things a little easier. There are
unparented children in grave need filling the orphanages and children’s homes in Nepal. They deserve a chance.

I am thrilled to be part of the effort.