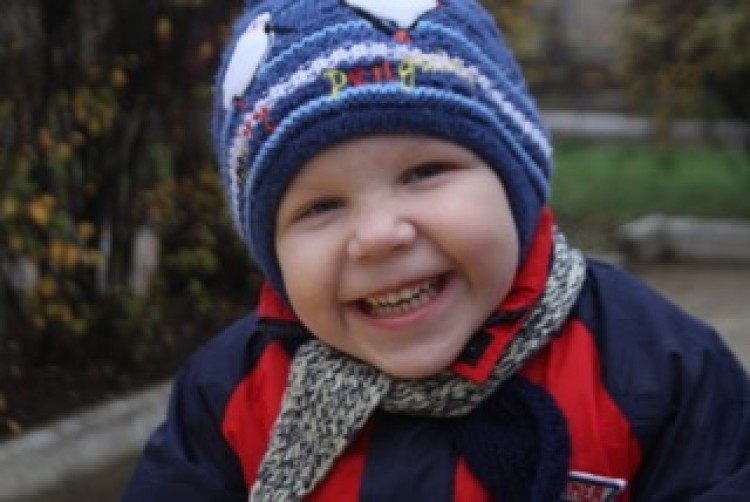 We have a special needs adoption story to tell and I want to shout it from the rooftop!!

It's a story about a little boy born in Kirovograd, Ukraine who never stood a chance. He was born with something called Klippel Feil syndrome and to Bogdan this meant his inner ear anatomy never formed properly causing profound hearing loss in both ears. In addition, he was born with a large Chiari malformation or protruding mass at the base of his very short, little neck. Although we'll probably never know the real story, we heard his Mom stayed in the hospital 2 or 3 days before walking out the door never to see her little boy again. At that very moment, God had a plan! Did we know it, of course not?

Bogdan was transferred to the Kirovograd Baby House which would be his home for the next 4 years. His progress was monitored somewhat but he struggled with fluid behind his ears which caused regular ear infections making the little bit of hearing he had useless. As he grew, his world was basically silent, but something was stirring inside this little boy. He would not be ignored! He fought for ways to get attention in his orphanage and somewhere along the way; someone noticed this was a precious little boy who needed to be heard. When he was 3 years old, a sponsor was found to pay for an operation to fix the Chiari malformation at the base of his neck. We don't know a lot about the surgery but the result was a very jagged 3 inch scar that runs down the back of his neck and spinal column. Still, despite all these troubling setbacks, Bogdan persevered and begged for attention until someone thought to try a hearing aid in the one hearing ear he had. Unfortunately, nobody at the orphanage really took the time to understand how it worked or changed the battery so it sat in a locked drawer and didn't get much use. Somehow little Bogdan didn't lose hope. He smiled, played and I just know he was the life of the party with his friends at that orphanage. It didn't matter that he couldn't hear or speak to his friends because he learned to communicate with his personality. And boy did he ever communicate. His body language, gestures and facial expressions told everyone he met he had courage, strength and a great sense of humor. During the time he spent at the orphanage, we were told a few families came to inquire about him. For one reason or another however, I’m guessing they thought Bogdan's journey would be too long and too complicated for them. Believe me; I can understand what it's like to stare at a 4 year child with a mass of problems including the fact that he's never said a single word other than "la la". How could a prospective couple not be overwhelmed and scared to death?

Back home in the US, I had somehow convinced my husband we should look into adoption. We had only been married a short time (2nd marriage) and he looked at me like I had two heads. After lots of discussion and research on adoption, my husband said YES and we started the search to find just the right child to join our growing family. It wasn’t long before we found a precious Ukrainian boy named Nikita on your Rainbow Kids website of all places. I fell in love right away with this 2 year old boy’s picture and I just knew we needed to bring him home. My husband graciously agreed and we were off and running, working with our agency to get our home study and the masses of paperwork done for Ukraine. About 8 months into our journey, we finally received our court date and we were so excited to meet Nikita. We purchased our tickets, packed our bags and tried to learn a few Russian words while we waited for our travel day.

Everything was rolling along until a few days before our departure and then the unthinkable happened. I can still picture in my head the exact moment our agency told us that our soon to be son Nikita was no longer available for adoption. We heard the words “He’s been adopted by a Ukrainian family” and I thought I would faint right there and then. “How can this happen” was all I could say. My husband and I were devastated! Through my tears, we listened while our agency’s director explained they had found another little boy who was available and did we want to consider this option. We were totally numb but we agreed to think it over. Little Bogdan’s photo and a few details arrived via email and we had a very difficult decision to make. I remember thinking we could use a vacation right about then and if nothing else, Ukraine was a place we’d never experienced before. I think we said “why not” and got on the plane. We arrived in Kiev and were given the official referral to travel the next day. The journey over the bumpiest and darkest roads we’d ever seen made us laugh and we were thrilled when we finally slowed down in front of our apartment building late that night. The next morning was a bit chaotic as we ran around from office to office signing papers and visiting various government officials. A few hours later, we arrived at the orphanage and were taken to the director’s office where we sat in a crowded room full of orphanage staff, various social workers and our facilitator who would translate Bogdan’s medical condition to us. We learned of his various issues and talked to his caretakers all of whom agreed he was a delightful little boy. It was time for God to work his magic. Just about then, Bogdan peeked around the corner with his adorable little face and big smile and he seemed to take the stage as he entered the director’s office.  I wondered how many times he had done this before. We were introduced to this little cutie and taken to the music room to spend some time getting to know each other. There is no doubt this was a precious little boy but we quickly learned he had very little hearing if any and we had no experience or knowledge of how to care for a deaf child. On top of that, we didn’t know anything about Spina Bifida or Chiari malformations or what these issues meant for the future of this child. We knew we were in way over our head with this little boy. We talked late into the night about how we might manage to care for Bogdan while still caring for the rest of our children in our very busy, always on the go household. It broke our hearts but we just didn’t think we could do it. The next morning tears streamed down my face as we made the rounds to our attorney and other government offices to explain why weren’t going to welcome this little boy into our family. Feeling defeated in every way, we started to make arrangements to travel home.

Again, God had other plans. We were asked to visit our attorney’s office before we headed back to a hotel in Kiev. We were all quiet as we sat in this little office waiting for our attorney to finish up another meeting. By this time, it was late Friday afternoon and everyone was ready to head home for the weekend. We were not expecting the conversation that was about to take place. Our attorney introduced us to her little girl whom she adopted from the same orphanage Bogdan called home. She knew the orphanage and the staff well and she had met Bogdan several times.  She asked us if we would be willing to go back to the orphanage that night to meet with some doctors she knew who could explain more about Bogdan’s hearing and other issues. We were shocked but couldn’t go anywhere that night anyway so off we went to this meeting late on a Friday night. Most of the staff had gone home but we were able to spend several hours with an otolaryngologist and neurologist who both had dropped everything to meet with us that Friday night.  At that moment I had to ask myself, “why would these important doctors give up their Friday night to advocate on behalf of this orphan child”? We listened as they explained that Bogdan’s life could be quite normal with proper medical care and a customized hearing aid. It would take several years of speech and language but the doctors felt he could certainly learn to hear and eventually speak. They also felt that US doctors could monitor Bogdan’s Klippel-Feil Syndrome with the latest MRI and CT technology which of course, would never happen in Ukraine. This was great news! We were feeling better as we looked in on Bogdan and his friends who were getting ready for bed. He ran to us with the biggest smile and a warm hug and our hearts melted right then and there for this little angel. He needed us and we were there for a reason. It was a magical moment when we realized the absolute power of destiny. By the end of that weekend, he was “all ours” and we were making plans for our second trip to bring him home.

Fast forward one year and four months, and Bogdan, who is now Brayden, is most certainly the life of the party in our own family. He steals the show wherever he goes and his love of life amazes all who meet him. Medically, he doesn’t let anything stop him and he has more energy than all his brothers and sisters put together. He’s had a customized hearing aid for almost a year now and is making huge strides with his comprehension and speech goals. He can count to 10, knows his colors and fully understands everyday conversation such as “Brayden, go brush your teeth”. He attends a hearing impaired classroom in our public school system where he has an incredible teacher and lots of friends who share his hearing challenge. All we can say is thank goodness we listened as God unfolded his plan in front of our eyes. What if we had walked away? What if Brayden was still Bogdan sitting in that orphanage unable to hear or speak? We shudder to think what would have happened to this little angel in that scenario but we also struggle with the idea that we almost missed out on one of the most incredible life changing journeys one can ever experience. The joy that fills our hearts as we watch this little boy “skip” through life in our crazy family is indescribable. We know without a doubt that Brayden is destined for great things!

To Be Frank: Nepal Adoption