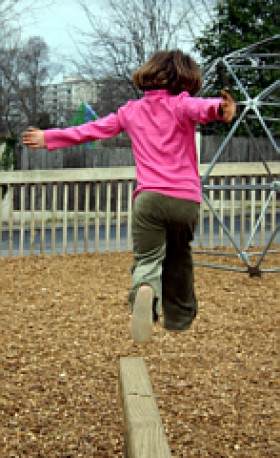 FREE CHILD CARE. The hand-painted, arrow-shaped sign, decorated with balloons and glitter, hung outside the Women's Crafts Fair. What a gift! It promised an hour or two of unencumbered holiday shopping while our children did crafts, had nutritious snacks, and played with a team of experienced child-care workers. My husband and I signed up at the door and waved good-bye to our 18-month old, sitting on a young woman's lap, happily poking her finger at a Pooh book, and at our five-year-old, diving into the construction paper and sparkle glue. We had a wonderful time strolling through the crafts fair, taking our time to browse the delicate pottery and jewelry with a leisure that we knew would be impossible with the kids. This place really has it together, we thought. We smiled ruefully at the parents hauling wailing toddlers through the crowd. The chorus of whining, scolding, pleading and reprimanding was a familiar scene to us, and we were glad to be free of it, for the time being, anyway. We pointed out the child-care sign to a few harried parents, and they just looked at us blankly.

It wasn't until an hour and a half later, when we went to pick up our daughters, that it became clear to me why there seemed to be so many restless children at the fair. It was because our children, along with two others, were the only participants in the center.

Dumbfounded, I said to the woman in charge, "Why are there so few kids here? This is such a great service! Maybe your sign wasn't big enough."

She shrugged, "Most parents wouldn't just come and leave their kids with people they don't know." Her comment hit me like a brick in the face. The silent addendum was, "And you would."

Yes. I, the adopted person, supposedly burdened with a lifetime of abandonment issues, had left my kids with absolute strangers. I had waltzed off happily with hardly a backward glance, to indulge in conspicuous consumption and lunch with my spouse. I was stunned. My kids had had a good time. The caregivers appeared kind, creative and enthusiastic. My husband and I had actually enjoyed an experience that would have otherwise been stressful and not fun for any of us. But I left there feeling like a terrible mother, a negligent parent, someone who could abandon my own children.

A year later, a friend called to get a referral for a baby-sitter so that she and her husband could celebrate their 10th anniversary. They had gone out so rarely since their six-year-old had been born, it seemed that they knew no sitters of their own. She had seen the phone list stuck on our refrigerator, the half-dozen names we called on a regular basis. "Sure, I could give you plenty of names of great sitters," I said. "I knew you would," she replied gladly. "You have such an easy time using baby-sitters," she said, and she was right.

That was brick number two.

After that, I had to do some serious soul-searching. What was this about? If you had asked me before I had children, I would have told you that I could never use a baby-sitter, not with my children, no way. My parents never did. In all my years of growing up, the only time I was cared for by people other than my parents was the night my grandfather died. I was seven, and my mother dropped me off in my pajamas at out neighbor's house before she took off for the hospital. I got to drink chocolate milk in the makeshift bed on their sofa and had a wonderful time. But that was the only time.

I was adopted as a three-month-old infant after my parents had been on ten years' of waiting lists. They weren't about to leave me with anyone, they said. They had waited this long; there was no point in handing me over to other people.

When my oldest daughter was three months old, I went to the local child-care registry. I called and interviewed a number of baby-sitters, and found one who proved to be loving and responsible. Even though I didn't need to go back to work for financial reasons, I felt that it was time. I went to work 20 hours a week, and Isabel cared for my child. When my second daughter was three months old, I called Isabel again. This time I had a new teaching job, and its preparation took much more energy and time. I dropped the baby off at Isabel's house, and it all felt fine.

Until the bombs started exploding. Those birthday-party conversations, light chitchat between parents while the kids swing at pi?atas, were like mine fields. I sat quietly while two mothers talked about their preschoolers. "Oh, he's only three," one of them said. "He's so little. I just don't think he's old enough to be away from me yet." Three months, I thought. Wrong. Her son was three years old, and it was giving her pangs to consider sending him to a half-day preschool a few days a week. The ice cream burned like acid in my chest. If this little boy was too young, then what of my girls? Another mother at my daughter's kindergarten picks her son up at noon each day and feeds him a homemade picnic lunch on the school lawn. She invited us to join them one day, but I declined and told her that my daughter didn't get out until 3:30 p.m. She sighed and shook her head. "Such a long day for such a little one," she said with dismay. I pasted on a rueful smile and didn't mention the two days a week that my child stays in after-school care until five.

I thought about it more. What does it mean to have such a carefree attitude towards child care, day care, baby-sitters, when other mothers seem to consider it some type of punishment? On the surface, you could say that I subscribe to the "it takes a village to raise a child" approach, a phrase that is fast becoming outworn though I wholly concur. I want my children to trust and love many adults in their lives and not be solely dependent on me or their father. I want them to see the world as a supportive, interesting, loving place and to know that they have many people to turn to and learn from. But is more going on under the politically-correct philosophy? As an adopted person, I need desperately to believe it is all right for children to be taken care of by adults outside of their families, and that they will not only be all right but will thrive. For if this were not true, then how could I possibly have the hope of being whole myself? As an adopted person, I need to know that it is true.

As they say, the proof is in the pudding. I look at my daughters. They are vibrant, affectionate, bright and curious. They love new experiences and meeting new people Thus far, they seem not to have come to harm by all the individuals who have loved them and cared for them. I'm not sure if my attitude comes from reacting to my own parents' overprotectiveness with me, their insistence on never leaving me, or from trying to prove some core issue about adoption, or a combination, or none of the above. I know plenty of adopted people who, upon becoming parents themselves, spin a hundred and eighty degrees away from this direction. They hold onto the flesh of their flesh and never let it go. Their own abandonment blasts out of them like dynamite before they can lift a finger to call a baby-sitter.

There is no doubt in my mind that being adopted affects parenting in a profound way. But how it manifests itself is as idiosyncratic as each parent, as unique as each child. The questions of what it means to be a mother, a parent, a loving one, spin different answers for each one of us. We can only do our best to follow our hearts, to watch both ourselves and our children with a compassionate eye, and to find our own place on the ever-tilting balance beam of parenthood.