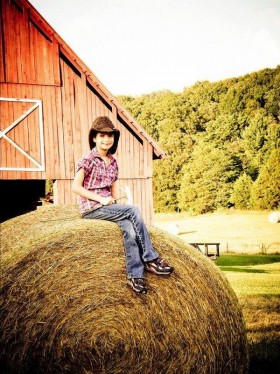 “Our lives are also forever changed by this little girl who came across the world to teach us what love is all about and to appreciate the little things all around us.” Brenda, WACAP Adoptive Parent “

To meet Monika, is to fall in love with her,” says Brenda, mother of a smiling 9-year-old who came home this past July.

WACAP staff agree, Monika knows how to make an impression. They’d traveled to Bulgaria in early 2011 to discuss opportunities for international adoption with government officials, and when visiting one orphanage, noticed a small, gentle girl trailing behind. Having lived there for 8 years, Monika knew her way around. She’d arrived as an infant with three others who, just like her, were born with hydrocephalus (causing fluid build-up around the brain) and received shunt operations to drain the fluid. Unlike her, they’d soon been adopted. Monika followed through the day, quietly hoping among these new visitors was a family who’d finally come for her. “She touched our hearts,” says WACAP CEO Lillian Thogersen, “and we made a silent promise to find her a family.”

When WACAP began working with Bulgaria later that year, Brenda, age 53, was considering adoption, a life-long hope little known by others but as strong as Monika’s hope for a family and unwavering as WACAP’s promise.

Ever since Brenda saw coverage about orphans in Eastern Europe at age 16, she began reading about adoption, and a commitment to help a child began to grow in her. “But as time went on I married, raised three kids, divorced,” Brenda reflects. “I started having seizures at 38 and found out I’d inherited familial epilepsy. Still the burning desire never left.” At 53, her children grown, Brenda moved to Tennessee, looked at her open farmland and breathed deeply. “I could not help but think how healing this setting would be to a child,” she remembers. It was time to keep her promise.

WACAP hadn’t lost a moment’s time in sharing about Monika with families, which included posting her photo on our "Waiting Child" website, where Brenda first saw her. “But I was looking for a girl with mild/moderate disabilities who might be overlooked by typical adopting families,” she notes. It wasn’t until WACAP’s Family Finders team sent additional emails to families urgently seeking a home for Monika that Brenda understood: Monika was that child, for eight years. “We were quickly matched,” Brenda recounts, “And I do literally believe that this was a match made in heaven.”

Since Brenda kept her desire to adopt private, her family and friends were shocked by her news but soon rallied around her in support. With the financial support of WACAP’s Promise Grant — a donor-funded grant that often makes the difference between a child being adopted or remaining in an orphanage — Brenda could focus on meeting Monika and her needs. That first meeting was in December of 2012. From those first moments, Brenda had no doubt they were meant to be together, but when she returned June 23 to bring Monika home, the little girl who’d welcomed her with a hug each visit was in the hospital. The shunt placed from childhood had malfunctioned, and later created enough pressure from the fluid build-up to trigger a seizure. Like Brenda’s family had, the orphanage and hospital staff, WACAP and our partner Bulgarian agency rallied around this newly formed family. Monika received the surgery she needed and with travel and immigration matters rearranged, she arrived home with her mom on July 4, a U.S. citizen.

Since then, everything’s changed because having a family has changed everything. Having just started school the year before she came home, Monika’s at a kindergarten learning level, soon starting home school and attending ESL classes already. “I’m amazed how quickly she’s picking up English,” says Brenda. Eyeglasses are improving her sight and strengthening her weaker eye. With a heel lift in her left shoe, thanks to her physical therapy, she’s walking more steadily, and also swimming, her favorite. To help Monika overcome sensory processing challenges, she and her mom go to a developmental therapy center and learn activities to do at home.

“I truly can say Monika changes the lives she touches, too,” her mom comments. It’s no wonder why. She laughed all the way through her first cupcake. She giggles when she gets on a bike, and doesn’t stop until she hops off. After Sunday’s dinner tradition of pizza with family friends, Monika’s made it tradition that everyone do the hokey pokey. This little girl greets her mom each morning with an embrace and these words: “You say ‘I love you,’ and I say ‘I love you.’”

And after years of hope, waiting and silent promises, moments like these … are probably what it was always about.

Libby Finds a Family Through Adoption