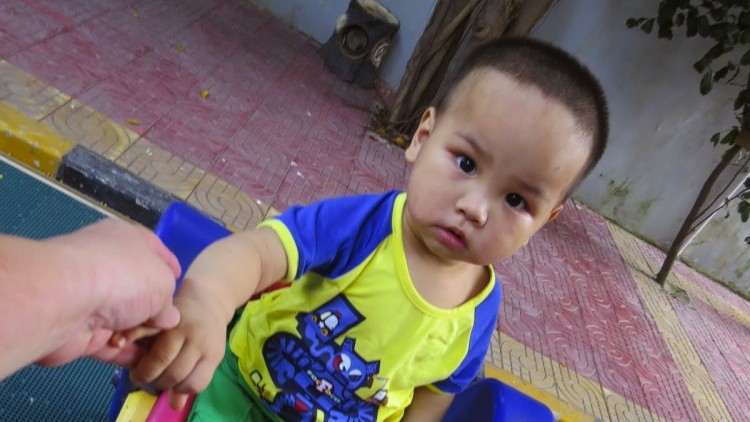 Last week was a really big week at the Clark house, a week we weren’t sure we’d ever see. “What made it big?” you might ask. We were matched. No, that doesn’t mean Janet and I have taken up online dating. Janet would obviously have a much better chance of being matched than I would. It means we were officially notified by the People’s Republic of China that our family is about to become bigger by one person, a boy named Elijah.

A letter, written in Chinese and translated into English, arrived at our adoption agency. They forwarded it to us. A Fed-Ex driver walked it to our door. We signed it. Now, we’re on the fast track to travel to China.

To understand how big this is for us, you should know a bit more of our story. Janet and I got married in 1992. Before the big day, we talked about how many kids we wanted. It wasn’t my idea to talk about this. My thoughtful future in-laws sent the two of us to a communication boot camp for engaged couples, where I shared a room with a guy who snored like a rusty chainsaw and Janet shared a room with his fiancée, who also snored like a chainsaw. It was a match made in heaven… for the two of them. For three days, we listened to speakers discuss topics, like finances, sex, and kids. After each talk, we wrote responses to a bunch of questions, including how many kids we wanted, when we wanted them, and why. Then, we passed our answers to our partners and talked about what we wrote. In my sleep-deprived state, I remember thinking, “I’m OK with two, as long as they come later.” Janet wanted… well, more. I was too groggy to notice.

Our ideal plan was to start our family four or five years later. Ideal plans are like those model lunches they display at the end of the counter at Chick-fil-A. They’re designed to entice you. “See how good I look? Yummy! Buy me!” They look perfect. But if you swipe the display cookie, take it to your car and bite into it, you find out it’s an old cookie that’s been sitting there for days. It doesn’t turn out the way you thought.

When the time arrived in our ideal plan to begin having children, we found we were struggling with infertility. It took significantly longer, to us, than we had hoped it would take. In 1999, our daughter Taylor was born. Seven months later, Janet came to the top of the stairs holding a pregnancy test, looked down at me as I fed Taylor, and said, “Guess what?” Although I could see what she was holding, my mind was in denial, so like an idiot, I asked, “What?” Only later did I realize the question was rhetorical. Seven months later, our son Jordan arrived.

In my mind, we had the perfect nuclear family. We had one Dad, one Mom, one girl and one boy. I was content. We had accomplished what I had set out to do. Now, I could develop a hobby or buy a boat or plan a two-year-long trip in an oversized recreational vehicle to visit every national park in the U.S. and Canada. Not that I ever think about those things. But Janet was not content….

Around the time Taylor and Jordan exited the toddler years, Janet began feeling restless. Deep down, she knew she wasn’t done, that our family wasn’t complete, that being a parent was one thing God equipped her to do well, that she had more love to give. She started dropping hints about the “next one.” I assumed she was speaking metaphorically, so each time it happened I nodded… metaphorically. She never pressured me. She just made it known that the door to more children was still open.

In 2006, I had a series of random encounters with adoption. I met several families who had adopted. Our church hosted an adoption seminar and I was asked to be the staff liaison to the adoption agency. Before and after the seminar, I found myself talking to the speaker about what adoption required, what it cost, how hard it was, and how big the need was. I stumbled onto several adoption web sites and out of curiosity began to read. I found myself thinking, “We could do that. That might be cool.”

One night, Janet and I were eating and Janet dropped another hint. Thinking I was being sly, I asked her, “Would the third one have to be born to us?” To my great surprise, she said, “No. Let’s talk about it.” To my greater surprise, I was ready to talk, too. So, the conversation began. On Christmas Day, I gave Janet a book on adoption, my way of saying, “I’m in. Let’s do it.” The next day, we filed an application and started the long training and paperwork trail to adopt a baby girl from China.

On September 6, 2007, after months of classes, fingerprinting, home studies, financial disclosures and personal evaluations, our completed dossier finally arrived in China and we entered the waiting stage for a healthy little girl. At the time, families were waiting about two years to be matched by China with a healthy baby, but the wait grew- three years, then four years, then five. As we waited, we talked about adopting a baby boy from Ethiopia. Given that our projected wait in China was getting longer, we started a second adoption, convinced it would be done before we reached the top of the list in China. Our Ethiopia dossier arrived on August 26, 2011, but the waits soon began to climb there, too. We wondered if we had wasted our time and money, hopes and prayers on a pointless dream. Maybe we should just cut our losses and quit. At the beginning of 2013, we were at our lowest place. We decided that we wouldn’t do anything else, spend any more money, fill out any more forms, unless things changed. Then in late 2013, we began to read and hear multiple conversations in the adoption community that said many kids in both countries who were being passed over because they were listed as “special needs” or waiting children.

“Special needs” can refer to a variety of issues, physical or emotional or developmental, temporary or permanent, from very mild to very extreme. It can be as simple as a child nearing the age where she is considered “too old” or as complex as a child with multiple medical needs. As Janet and I talked about what we were capable of handling and looked at the huge number of special needs children, we felt like God was saying, “One of these kids is meant to be part of your family.” It wasn’t an audible voice, just a conviction and peace that He’d already prepared us and that He was going to lead us to a special little boy or girl. So, we contacted our agency and asked them to review our qualifications.

In July of this year, Janet was reading a blog written by Lara, a woman who went with an America World ACT team to an orphanage in China to work with the children. Each day, Lara wrote about a different child and included pictures (but no identifying information to protect the child’s confidentiality was given). We spotted a little boy on her blog who was familiar to us, because we’d seen him on our agency’s web site as they were advocating for him. We hadn’t reviewed him carefully, but when we read Lara’s story about spending several days with him, our hearts were captured. So, on August 25, 2014, we asked our agency if we could review Elijah’s file.

Reviewing a child’s file means you receive a lot of documents, originals in Chinese and translations in English. The orphanage tells you what he eats and how often, when he sleeps, what his days are like, what medical care he received, what milestones he’s reached in his development, what makes him happy and what gives him trouble. During review, you’re given permission to ask any questions you’d like, to request updated pictures and video, and to show the file to your doctor so she can make recommendations about future care. When you reach the end of the review, you decide whether or not your family is a good match for that special child and you tell your agency. I had misgivings about this part of the process before we did it. It sounds almost like buying a used car. You check the odometer, the wear on the tires, and look for signs it’s been in an accident. You wonder if you look good in it. You ask yourself, “Can I handle the risk it might need repairs?” With adoption it’s different. It’s hard to explain until your heart is involved. You aren’t looking to see how much use you can get out of this little boy or girl or whether or not this child fits your style. You look at the data on the pages and ask yourself:

“Can I give this little boy a great life? Can I love him and serve him and be the Daddy he wants and needs?”

On Wednesday, September 24, one week ago, we received our Referral Acceptance, the official document from China that essentially says, “Will you accept this child as a part of your family?” With shaky hands, we carefully filled out the form, checking the box that says, “Yes,” making certain everything was right, and mailed it back along with a lot of other documents. In the meantime, we’re racing to finish all the stuff that needs to be done to make our home perfect for Elijah. It’ll be a very busy fall for us, but it’ll also be an exhilarating fall because each day brings us closer to Elijah and we can’t wait to see him.


America World is committed to helping America's families and the world's orphans experience the love of God in Jesus through the "Adopted by Design" message.

We are a Christian adoption agency that values the right of every child to have a family and believes adoption is a God-ordained way to build a family. America World is also devoted to actively supporting orphan awareness ministries and hopes to spread the Adopted by Design message within the Christian community.

As an international adoption agency, we offer services that are both personal and dependable. Our Family Coordinators are trained to handle every detail of your adoption process and will begin to work with you from the moment your application is approved.

Your Family Coordinator works closely with you throughout the entire adoption process and is sensitive to the needs of both you and your child. They will be by your side, as your main point of contact, throughout your adoption process.

We believe that nothing happens by accident, and if you decide to adopt through America World we are confident that God will place just the right child (or children) in your home.

Adopting a Child with Spina Bifida