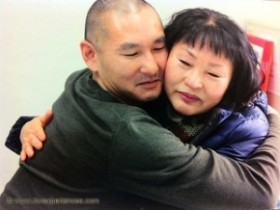 Like most adoptees, I have two birthdays and two names. I was born at home in the southern city of Yeosu, South Korea and later given the name Seung Chul Lee. At the time of my birth, my father had already been absent from my life because while my mother was six-months pregnant with me, he abandoned her–us. I lived at home for about five days as my mother painfully contemplated what would be the best future for me, since I was her firstborn child. She finally made the decision to place me for adoption with Eastern Social Welfare Society (ESWS) with a set of specific instructions: She wanted me to be adopted by an American family.

The celebration of my second birthday occurred four months later on May 21, 1982 in Denver, Colorado as I was born to Karen and Dale Hendershott and given the name Troy. I had your typical childhood growing up in the Colorado suburbs; riding bikes with neighborhood friends, participating in all of the various pee-wee sports programs, arguing and teasing my sisters, and of course being taught that there is no other team than the Denver Broncos. I did, unfortunately, experience many negatives situations that I often kept hidden from my parents, because I felt as though they could not possibility relate.

It was everything that you could imagine: being made fun of as people brought their fingers to their eyes sloping them at you, the verbal racial slurs, bowing or making stereotypical gestures or comments as a form of mocking you, plus a variety of other things just because of how I looked physically. That’s why I continue to say that it’s very difficult, if not nearly impossible, to explain to others how it feels to be a Korean adoptee.

However today I have awoken in a place unlike any I have experienced in all of my travels: a house filled with other Korean adoptees where we share similar stories. Even though I arrived here the day before and many were arriving late into the evening, we did have brief chances to get introduced and share a little about where each of us were from–California, Pennsylvania, New York, and a lone Australian. We all agreed that it was such an interesting and surreal environment to be in, knowing that we are all connected through such a significant part of our past and sharing much of the same identity.

Finding it difficult to sleep–as most of us did—I climb out of bed at around 7:40 a.m. and, after a hot shower, I begin to organize my things for a day that I already know I will never forget. Checking to make sure my camera and iPhone are fully charged, I head downstairs and find Mikey from California, but originally from Fort Collins, Colorado, as well as the twins from New York, Danielle and Kaitlynn, all sitting around the kitchen table. Yawns abound as feelings of mixed emotions and excitement are coupled with strong cups of coffee. Just before 9 a.m. we begin the 15-minute walk to the ESWS headquarters.

We are greeted by a few volunteers before being led to one of the counseling or post-adoption family meeting rooms. Ms. Kang (my caseworker) comes in and we are told that in a few short minutes a volunteer that is designated for each of us will be showing us to separate rooms, and that they are briefing the family members now. Then she leaves. This only makes us more anxious.

The minutes tick away like passing hours, then, suddenly Ms. Kang bursts through the door with the volunteers and begins directing us with whom to follow. With little time to think, I am walking down the hallway as Ms. Kang tells me that she will be my translator for today. I think that we will be walking through a door to a small room like the one we were just in: But it is actually the room where they have been briefing the parents! We’re almost unable to breathe, as four faces turn and stare in our direction. I know my mother is one of these faces looking back at me.

I notice one woman looking directly at me smiling and I can already sense that this is my mother. Ms. Kang introduces us right there–not waiting to get us to the more intimate counseling room. We share in a long hug that is followed by some tears. As we walk through a set of doors and past some other desks to the corner of the building, my mother cannot let go of my hand. I keep smiling as we enter the small room that has two chairs set up on each side of a white table. I let my mom take her seat and sit next to her as Ms. Kang sits across from us. The entire time my mother cannot let go of me and tells us that she feels as though she is dreaming. The conversation moves slowly as expected with all of the translating. Unsure of what to expect from our first meeting, my mother asks if I would like to come down to stay with her for a night. Excited by this unexpected invitation, I tell her that I would love to visit.

Plans are finalized, a series of back-and-forth questions are exchanged, and before we all realize it, a person is knocking on the door to let us know that the van downstairs is waiting to take us to the restaurant for lunch.

As we arrived at the traditional Korean restaurant, my mother is still clasping my hands and I cannot help but feel like a proud son to her.

The meal is tasty, but we are more concerned with the conversation that we have been waiting years for. We talk about how and where I grew up, I asked about her children, we discussed my travels, and I learned that my mother is quite the cook and would one day like to open her own restaurant. At one point my mother asks if we can order a beer because she’s still a bit nervous, laughing I say that has to be my mom.

As the dishes begin to be cleared from the table and since we have our volunteer translator until 3 p.m., we decide to find a nearby coffee shop and continue the conversation. During our conversation at the Coffee Bene, my mother told me that for several years she tried to search for me.

She had eventually given up hope.

I asked her how she felt when ESWS contacted her to let her know that I was searching for her. She said that she was overcome with joy and thanked God that I was alive and healthy and wanted to meet her. When it was time to depart, we slowly strolled to the subway station. Once again her hands clasped around mine and there was a long embrace. Not wanting to let one another go, I told her that I am excited for Friday and the weekend. As I had to be the first to walk away, once I reached about the middle of that block I turned back and she was still standing there watching me as if I were a child walking off to school. She waved at me and I couldn’t help but be overcome with emotion.