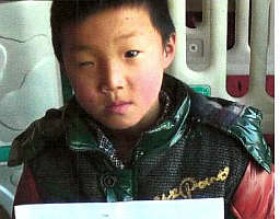 This is the story of a special little Chinese boy who is in the USA right now (July 2014), and needs to find his forever family.

Nian (Nee-ahn) is a wonderful nine and half year old child. He was abandoned at birth and placed in an orphanage soon afterwards. About four years ago, he moved in with a foster family who lives in a northern rural Chinese town. He is close to his foster family and speaks very fondly of them.

Nian is in the United States in July (Washington DC area) as a part of the Bridge of Hope program of Cradle of Hope adoption agency in Silver Spring, Maryland. He is a very healthy boy who is very normal except that he was born with no vision in his right eye. He has good vision in the left eye and will soon be getting glasses to enhance that vision even more.  While he is in the United States, he will also receive "scleral cover shell prosthesis" on his blind eye. This large plastic object  is hand-painted to perfectly match his other eye. It sits on his eye like a contact and the only care needed is to clean it  a couple times a year with baby shampoo.  The first steps have begun and soon it will be undistinguishable which of Nian’s eyes is which. It will likely enhance what is already a handsome boy!

My husband and I are hosting him in our home during most of the month of July.  When a child comes to live with you and is with you day and night, you get to know them well.  Nian is clearly is very brave to come halfway across the world to the United States. He is also shy (he blushes at times) and very sweet. He also smiles broadly when he is happy which is most of the time.  He loves animals and is never without our shitzhu dog. He pets her and hugs her and the two are inseparable. He is also very neat – makes his bed each night, folds his clothes and helps me in any way he can.  We just adore this special little guy!

His teachers in China shared that he studies hard, makes good grades and has been praised for his work and behavior in the school.  Nian is clearly very smart. He knows the English alphabet and reads words in English. He knows all the colors in English and can count to at least ten. Yesterday, he began adding three digit numbers together to show us his math skills. He is picking up English phrases and putting words together quickly.  My sense is that he would adjust very well to a new home and school.

Our Northern Virginia neighborhood has embraced this child and he is never without friends. The first night, people dropped by with Chinese food, toys and clothes. He's likely never had such royal treatment, and when he realized that this was all for him, he showed his joy (and amazement) openly.  I've observed him playing with older and younger children and he does well with either groups. He is patient with the younger children and wants to help them. The older boys enjoy being with him and he blends in with either group.

Nian clearly is well-treated in China and has no fear of men. He calls my husband "Shoe Shoe" (uncle in Chinese), and he sweetly brings him puzzles that he needs help on or shows him shyly the Lego projects he has completed.  I arrived home with groceries yesterday to find KangNian sitting happily on the floor in my husband's office quietly playing with toys while my husband worked on his computer. The dog was right beside him and all three were just happy to be close to each other. He is such a dear child. He can express his affection easily and gives us both big hugs throughout the day.  One of my favorite times is morning when he bursts in our bedroom door and announces "hug time" as we hug and tickle him with the dog yapping at his side.

So have I shared enough comments to interest some would-be family out there in this child? This little boy needs an American home! PLEASE don't let his age dissuade you from considering. He is small for his age and seems much more like a 7-8 year old than a 9.5 year old. He has had good life in China and is adapting well to life here. I truly believe that he would transition well to a new forever home here in the United States and you will have many years of love to share with him. I hope that someone  will read about this child and want to know more. Nian and I would be happy to meet up with you in person in the DC area.

Cradle of Hope, the placing agency, has a wonderful swim party planned in Silver Spring, Maryland for Saturday, July 12th and interested parties (married couples  ages 30-55 and single women) can email Pat Gancie at PGancie@cradlehope.com or call the agency at 301-587-4400 to learn more about the adoption process, fees involved and this child (or many of the other children who are currently in the United States through this wonderful short-term hosting program.) The children arrived on July 1st and return on July 21st so there is little time to meet them in person. Please keep Nian in your prayers and in your mind…he needs a forever home in the United States and that family would be blessed to have this little boy as a part of their family!

View Other Children being hosted in the USA and needing families: PDF

Kun, left, is one of 9 children being hosted in the USA.