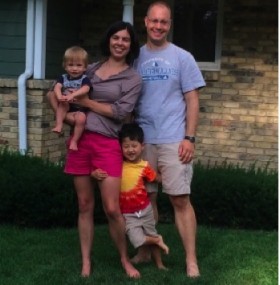 At our first Chinese New Year celebration after adopting our son, K, I was sitting with a group of adoptive moms while the dads were wrangling all the 4-year-olds boys. The conversation turned to our weekly routines. Moms were shuttling their kids to all the activities typical 4-year-olds participate in – preschool, swimming lessons, music and tumbling – while also juggling a slew of therapy – physical therapy, occupational therapy, and speech therapy. Our therapy is play therapy.

Within a month of K coming home, it was clear we needed help with the transition and attachment. It was difficultly with naptime that drove me to seek out therapy for K and our family. His two-hour nap was a five-hour affair. There was the sobbing and crying and kicking and screaming before nap, the hard crash, then a repeat of the sobbing and crying and kicking and screaming after he woke up. My friends with 4-year-olds thought maybe he didn’t need a nap anymore; their kids had aged out of naps by the time they were 4. I just didn’t buy it. He played hard from dawn to dusk like a typical 4-year-old, but was also trying to understand this new place, language, culture and food, and grieving his foster family.

I was the mother, I should know, right? But I didn’t really know for sure; I had only been a parent for a month, so what could I possible know?

After one crazy, chaotic afternoon, I left a frantic voicemail with a local counseling office and we started visiting L, who became our family therapist. I call L our family therapist because she really was treating our family, not just K. K was the patient, but we were the treatment. It was what we did with K in those days and weeks between our visits that mattered most, not the small window of time that we were with L.

I’d like to say L had some magic bullet for us, but it just took time. She’s helped us think about what K’s behavior was trying to tell us, and how to react to the message rather than the behavior. When he is upset that a toy or book that seemed inconsequential is moved or gone, he might be reliving the experience of leaving his things in China behind. When he is fighting with his brother, he may want time with Mommy. When he wets his pants, he may be trying to control the only thing he can control in a world that feels out of control to him.

We spend a lot of time working with K on attachment, anxiety control, and communicating his needs. It seemed so overwhelming and challenging initially, but now a year later, all this “work” has become part of our routine and much of it is a game.

For example, we joke that nobody “gets The Mommy all the time.” While it’s a funny phrase, it’s also effective; when K needs some time with me, he says “C has had Mommy all day. I should get some time with The Mommy.” Then we’ll find some time for him to snuggle in my lap. We do a lot of “do-overs” so he can practice the right action or words when he’s doing or saying the wrong thing. We also revert to treating him like an infant or toddler when his behavior tells us he just can’t handle being four. For example, we give him water in a sippy cup like a baby. Or tell him how he feels like you would talk to a toddler, e.g., “K is crying so he must feel sad. Does he feel sad because we have to leave the party?”

I’m grateful for L’s compassion, expertise, and wisdom. L has moved to another city, but we will be transferring to a new therapist. My only regret is that I didn’t call the counseling office earlier. We are truly blessed to have this wonderful, creative and loving boy as our son.