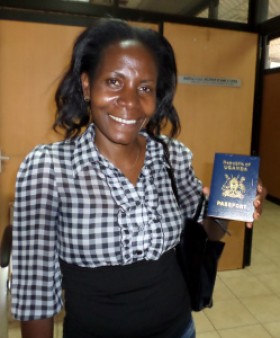 In the office we often say that, when it comes to Ugandan adoptions, the only predictable thing is unpredictability. Coming from a North American culture that is highly ordered and regulated, many families find it difficult to imagine what this might actually mean, especially as they travel to bring home their child. Do they just need to “be flexible” like all good international travelers, or does pursuing a Ugandan adoption require something more?

Today, as we waited off and on for six hours – count ‘em, six! — at the passport office for a single passport, the answer was clear. Completing an adoption in Uganda requires an extra measure of patience and fortitude. Not simply the politeness of a traveler in a foreign land, but the unconditional love of a family whose heart will now forever live in two countries.

After breakfast, I headed to the passport office with our attorney to pick up a passport we had been told would be ready before lunchtime. The passport office is a series of offices, but the waiting area is a group of tents with metal benches. And it was hot. Super hot! For over an hour we were shuffled from one tent to the next as we waited for our number to be called. We waited as employees filed through boxes of passports, calling out every number, it seemed, but ours. Some people were told to come back again in two weeks. Others arrived only to discover there was a problem with the passport they were waiting for, and could they please wait in another line to see if it could be fixed? Hours later, our number was finally called. Our passport was correct and ready.

Time to head out to dinner!

As I opened that passport and saw the beautiful face of the little boy inside, my heart filled with happiness. The frustrating wait, the equatorial heat, the shuffling from tent to tent – it was all worth it. That passport means a child can travel home with his new parents. But more than that, the passport is a symbol of the beautiful country that gave him birth.

It’s been almost five years since I first stepped foot in Africa. Every time I arrive at my inn in Kampala, I feel like I’m coming home. For many years now, my heart has been in two places – at home in the U.S., and here in Africa. Despite the headaches of developing systems and infrastructure, I love this place. I love the natural beauty and the warm culture of hospitality here, but, especially, I love the people. And I have learned that love can cover a multitude of mishaps; it can accommodate for unpredictability. Not simply with the polite graciousness of a traveler, but with the deep affection that only family can give.

Agape Adoptions is a licensed, fully accredited child placing agency based in Washington state. We serve adoptive families across the U.S., and offer homestudy and post placement services to families in Alaska, Washington and Oregon. Agape currently has programs in China, Hong Kong, Bulgaria, Romania, and the Dominican Republic. Adoption is a life changing experience and a life...