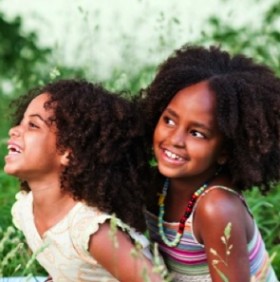 My daughter Tania – where to begin to describe her? She is a little spitfire, a bundle of energy, love and emotions. A Latina at heart! Tania is from Cali, Colombia, and came to our family via a detour of Ethiopia on my end. I adopted my 8-year-old daughter, Meskerem, from Ethiopia as an infant in 2006 and was hoping to adopt a sibling from the same country. But as so often happens, life doesn’t always go as planned.

While I was on a waitlist for a child in Ethiopia, I stumbled across Tania’s profile on a waiting child list. She was from Colombia, where I spent nearly six months in my twenties, backpacking and creating fond memories of the beautiful country and its friendly people. I inquired about her and it took another four months before I could see her file. She had been on a waitlist for over 1.5 years and spent her entire life in an orphanage. I took a leap of faith and never looked back. I’ll never forget how bravely my little girl took my hand, after knowing us for just twenty minutes, to walk off into her new life.

The first few weeks were just pure sweetness, until Tania felt more secure with us. It was all schoolbook behavior; yet no amount of prepping, reading, and classes will prepare you for the adjustment and grieving period of your child. Sometimes I (and my older daughter) just wanted to run away. Meski even said that she’d rather be an only child again. It nearly broke my heart hearing this. You want the best for your children, yet there are moments when you wonder if it was in the best interest of the child at home to add to the family. I was very lucky to have the support of friends who had also adopted older children, as well as an amazing social worker who helped me through the first intense months. It got better every week, even though in the beginning you can’t really see it. Looking back now, it’s amazing how far we have come.

Tania will never be as calm as her older sister. She is just who she is, and part of that is living her emotions to the fullest. She loves to laugh out loud and when she starts giggling her whole body shakes. When she gets upset and starts screaming in frustration, you want to be far away. She seeks out hugs and gives kisses freely to her loved ones. To her credit, she has also come a long way in controlling her emotions. In the beginning it felt like having a toddler in a 5-year-old body, nowadays she is a well-adjusted and hard-headed 7-year-old.

Yet the worries I had about bonding issues and developmental delays were completely unfounded. She bonded to us naturally and loves us with all of her heart. Tania lives for her sister and is basically her shadow. The girls are extremely different in character but have formed a tight sisterly bond. Meski doesn’t always admit it, but she is very proud of her little wild sister and always has her back. Tania is extremely smart and inquisitive and nothing passes her. She loves going to school and has many friends there. She is fluent in English and speaks German (my native language) as well Spanish. I wish she would have retained more of her native language, but since she is immersed in English all day at school, she is reluctant to speak Spanish at home with me.

Tania is considered a special needs child due to a blood condition she was born with (which was the reason she was on a wait list for so long). Yet her special need actually just equates to a few extra doctor visits a year and 30 seconds of taking medications every 12 hours.

Adopting an older child is quite different and in my experience way more challenging than adopting an infant, but it sure has its rewards. The many conscious ‘firsts’ are priceless. The first time in a supermarket, the first time at the beach ("Mama, so much sand, so much water!"), the first time on an escalator... It sure opens your eyes to what we take for granted. Yet Tania took everything in stride and was always open to new adventures, as long as we were by her side.

We have melted together as a family and deal with every day issues any bio family might deal with--plus a few adoption related issues thrown in every once in a while. We are from three different continents and live in a country that was adopted by us all. We don’t consider ourselves different. We are who we are. First and foremost I want my kids to know that they are my children, yet I don’t want them to forget where they came from, as this is a very important part of who they are. I try to keep memories of my daughters’previous lives alive. We regularly speak about their native countries and the families they have there, listen to Colombian and Ethiopian music and attend cultural events. I also stay in touch with the orphanage where Tania was raised lovingly for the first five years of her life and where she received the strong foundation that helped her adjust to her new life .Once we return to Colombia we will certainly stop by for a visit. They were Tania’s first family and are therefore part of our family. When we met Tania, we spent four weeks in-country, part of it travelling in the countryside. Both girls have strong memories of this trip and I’m planning on taking them back in the next two years. I am also in touch with other families who've adopted children from Tania’s orphanage and we are planning a reunion this summer.

As mentioned before, Tania is a Colombian at heart. A true Calieña! Part of the daily diet in Cali is rice and beans and sure enough, Tania could eat it every day. We are fortunate to live in a very cosmopolitan area, with easy access to Colombian food and culture. The other day we passed by a Salsa studio which had their doors open with music spilling out into the street and Tania started dancing right on the side walk. That’s my girl. Loves life! I get nearly daily letters from her, telling me how much she loves me and her sister and her extended family.

I don’t think of my children as my adopted children. I just think of them as my amazing girls and give thanks every day for being blessed to be their mom.