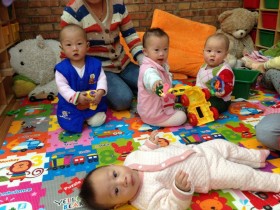 On a late summer night in 2003 Robert Rogers' world was tragically rocked to its core.  Within seconds his entire family, his cherished wife Melissa and all four children, perished in a flash flood on a Kansas turnpike. After 8 years as a father and nearly 12 years as a husband, life as he knew it changed in a single moment when a massive wall of water inundated their family van, sweeping them off the highway and into a torrential darkness.

Instead of falling into despair, Rogers found hope in the face of tragedy through ministry. To honor his heavenly family he looked to his passion of orphans and children with special needs. What began as a vision to build five orphan homes in five countries for the five family members who perished has become a reality today with seven orphan homes on four continents.

One of the orphan homes, Alenah's Home, was named after Rogers' then one-year-old daughter adopted from China. Alenah’s Home, in Beijing, is Children’s Hope International’s  foster care center where special needs children receive the medical care and attention that they would not receive in an orphanage. Staff and volunteers work intensively with the children, giving them the physical and emotional care they need to be all that they can be. The older children often attend school and participate in activities outside the foster home. Some of the children at Alenah’s Home will be adopted, but most will not so it is vital to the staff to emphasis one of the most important things the children receive at Alenah’s Home is a strong sense of family.

Many Chinese adoptees have visted Alenah's Home over the years to “give back” to the children remaining. Some visit with their parents for a day or two. Some stay for months, using their various talents to care for the children, maintain the home, and help with public relations.

Mary House of Children's Hope International adds that all adoptees are welcome, "Young people adopted through any agency are invited to visit Alenah’s Home."

Juliet Ercolano spent several months volunteering at Alenah's Home,  "As a Chinese adult adoptee working at Alenah’s, I found myself becoming emotional from time to time, no doubt because I could relate in a very special way to each of those babies and children. Twenty years ago, I, too, was an orphan being cared for in an institution, and needing to rely on the kindness of strangers to get my basic needs met. Although it’s certain that the conditions at Alenah’s are far, far better than the conditions of the orphanage I lived in for five months back in 1994, the realization that these babies and children still need “forever families” sometimes brought me to tears."

Out of one man's tragedy many years ago, a hope, a shining light in the name of his heavenly baby girl shines bright in an ancient Hutong neighborhood in Beijing.  This light, Alenah's Home, is bringing purpose and comfort to lives both young and old alike.

Congratulations, Its a BOY!