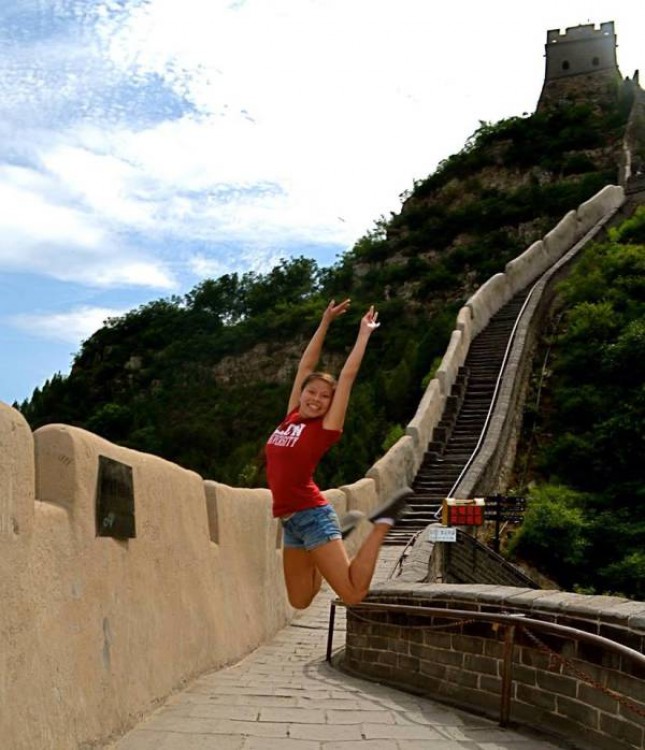 I had only been Juliet’s mother for a few hours before I started thinking about how my husband and I would have to help her stay connected to her Chinese heritage.

“We have to pledge to take her back to China every few years, so she knows and understands her place of birth and the culture,” I said, solemnly and with every good intention, to my husband on the fuzzy, long-distance call from the hotel in Nanjing where I first met the tightly swaddled six-month-old with the bright red cheeks and a bristly mohawk of black hair.

My husband had remained in Baltimore with our homemade daughter, four-year-old Olivia, while I traveled to the People’s Republic, accompanied by my father, Bob, and a group of other adopting parents, to adopt our younger daughter.

She was handed gently to me in a Nanjing hotel room by the smiling, middle-aged Chinese woman, an ayi, who took care of her in the orphanage.

Sadly, good intentions notwithstanding, that is not what happened. As John Lennon famously said “Life is what happens when you’re busy making other plans.” And our lives — as the working parents of two active, busy, growing girls — didn’t include the time, or the money, to make those intended trips. Added to the time crunch was the fact that, as a ballet dancer, Juliet had to spend every summer in training — just like an athlete!

So as Juliet entered her senior year of high school, we decided it was time to bite the proverbial bullet and make that dream of returning to China a reality. We put money aside, and contacted the wonderful agency that brought her into our lives — Children’s Hope International in St. Louis, Mo. — to help us plan the actual trip.

It seemed to take forever to get here, but eventually the calendar turned to June, and Juliet and I took off from Dulles International Airport for Beijing. (We decided, in the end, for various reasons that this would be a mother-daughter trip.) Of course, for years, we’d seen it in pictures and on TV: Tiananmen Square, the 4.8 million square-foot plaza that was the site of the 1989 pro-democracy movement and subsequent government crack-down.

“Oh my gosh, there he is: Chairman Mao! Ni hao, Mao Zedong!” I said excitedly to Juliet, as we stood in the square and looked at the giant portrait of the infamous leader hanging on the scarlet-wall of Tian’anmen, the Gate of Heavenly Peace, that leads into the Forbidden City. “Remember when you were a little girl, and thought his name was ‘German Mao’?”

The afternoon before, we had arrived in Beijing, the capital city of the People’s Republic of China, bleary-eyed and jet-lagged after a 14-hour flight from Washington International Dulles. (Juliet slept a lot, and I watched every episode of “Louie,” “The Office” and “Parks and Recreation” that they offered on our United Flight.) By the time we got through customs and security and made our way to our hotel, we were beat, and happy just to walk the streets of Beijing near our hotel, enjoying watching passersby and poking into shops and restaurants.

On the morning of our first full day, our guide, Tim (his chosen English name) and a driver picked us up in our hotel lobby and we set out on the first item on our itinerary, Tiananmen Square and the Forbidden City, to be followed by a chance to spend the afternoon climbing the Great Wall.

I was almost awestruck standing before Tiananmen, or the Gate of Heavenly Peace, knowing that it dated to the Ming Dynasty in 1420 – years before Columbus discovered America! You could feel the history! We had hoped to view Mao’s remains in the crystal coffin inside of his massive mausoleum, but our visit fell on a Monday, when it was closed, so I had to satisfy myself with looking at the building from the outside, and snapping photos of the imposing sculpture of China’s workers that stands outside. We also posed in front of the Monument to the People’s Heroes, and saw the Great Hall of the People – all edifices that we had read about for years. We spent about three hours inside the Forbidden City, which was home to China’s emperors for more than 500 years. Again, the sense of history was palpable. Our guide helpfully pointed out the symbolism inherent in the architecture, as we gaped and took photos. I loved stepping over the traditional Chinese thresholds as we went from section to section, and was delighted when Tim informed us that Chinese thresholds are thus designed because “ghosts don’t have knees, so they can’t walk over.” We viewed the Hall of Supreme Harmony and the golden throne in the Hall of Preserving Harmony, and my imagination flashed back to film “The Last Emperor,” which told the story of Puyi, China’s last emperor, which was filmed there.

While I was captivated by the sense of history and the architecture, Juliet enjoyed snapping photographs of the other tourists, which not only included other waiguoren (foreigners), but also thousands of Chinese tourists from all over that vast country. We found especially darling the small children wearing traditional Chinese split pants, which allow the wearer to relieve himself freely, anywhere and anytime! In the afternoon (after a quick buffet lunch where we learned that the Chinese don’t believe cold drinks are healthy, even on 90-degree-plus days!), we tackled the Great Wall. Tim wisely chose to get himself a cup of tea and stay behind while Juliet and I headed up the surprisingly steep, worn stone steps to the first fortification in sight.

Again, we were awed by the knowledge that some sections of this world famous landmark date back to 221 BC! Almost equally awe-inspiring was the fact that so many Chinese women were scaling these steep steps in high heels and platform sandals!

Before leaving, Tim helped us bargain for tee shirts proudly proclaiming “I Have Climbed the Great Wall of China.”

Check back tomorrow as Lisa and Juliet share with us their very special visit to Alenah's Home, a home to about 20 orphaned babies and children with special needs in Beijing.