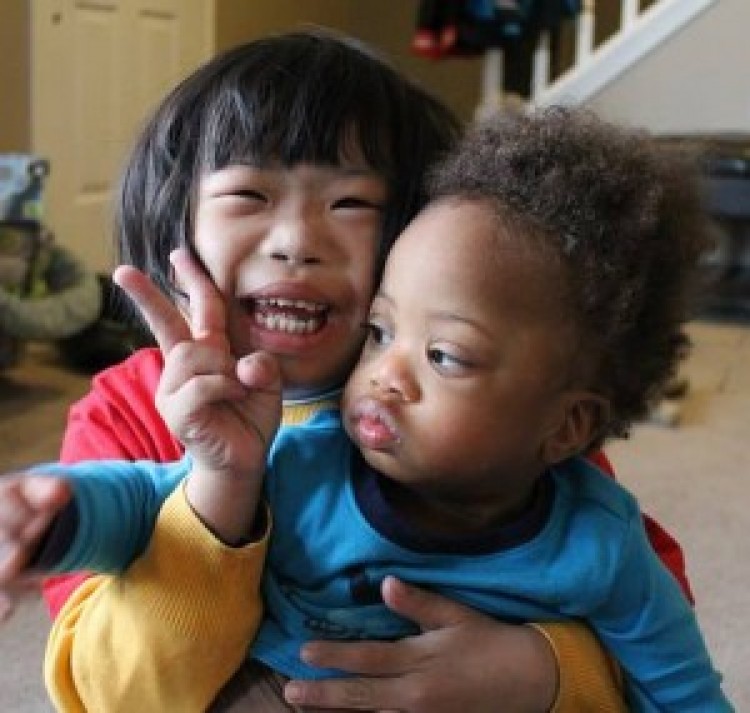 I was innocently browsing through Facebook one day this fall when I saw the post. “Host families needed” it read. Intrigued, I clicked on the link and quickly requested a password to see the profiles of the waiting children. One smiling face stood out and I was immediately drawn in. I called and received more information over the phone and the anticipation set in; the anticipation of having a familiar conversation with my husband. “So, I was on the internet today and I saw this little girl…” it began. We agreed to host Ya Ya over Christmas and advocate for her.

We drove through the night that cold December morning and arrived at O’Hare airport before the sun rose. We met with some of the waiting families and soon, a group of children, led by chaperones started towards us. And there she was! She was much, much tinier than we had imagined, full of smiles and not afraid. I motioned to her and she came right over and gave us hugs. Our 9 year old daughter gave her a doll and she latched onto her right away. She was amazed by everything around her, automatic flushing toilets, doors that opened on their own, everything was new and exciting.

We arrived home and were greeted by the rest of the family. Ya Ya immediately was drawn to our son, who shared something in common with her, Down syndrome. They became good buddies over the month she was here. Ya Ya was sweet, gentle and kind with him. She fit in very well with everyone, after a few initial struggles between her and our almost 3 year old son. I believe he thought she was much closer to his age as she was so small. Once they (he!) worked out their “differences,” all was well!

Ya Ya fit in amazingly well! Everyone around us wondered how she would adapt, how would she understand us, what if she is upset, how will you communicate with her??? We used Google Translate and she understood very well! She is very expressive and we could tell by her reactions if she understood or not. Her English was pretty limited, but that did not stop her from playing and interacting. She enjoyed showing us that she could count in English and liked to use the phrases that she picked up. We discovered her love of dancing around the second week here and dance parties were a regular happening around here!

Ya Ya is bright, inquisitive and catches on quickly. The fact that she had Down syndrome really wasn’t a concern of ours as our son has Down syndrome. She could do far more than we imagined! She was completely independent with her personal hygiene; showering, brushing teeth, getting dressed, combing her hair she did all by herself. Honestly, I think she trumps our 9 year old when it came to taking care of that independently! She enjoyed playing with dolls, our play kitchen, coloring and painting. Her artistic “skills” were a bit lacking, but she played well with toys.

As our visit drew to a close, I found myself panicked and a bit weepy thinking about sending her back “home.” After some discussion, we made the decision to move forward with adoption. It just felt right, especially after being able to see how she fits in with our family. I have to admit that while she was here, I found a message board discussing hosting programs. Several people posting on the site were aghast that children with Down syndrome were being brought over as part of the host program. They wondered how they would understand what this was all about and how would they react when it was time to go back? I can say first hand that she handled it great! We started talking about going back to China about 10 days before her departure. We talked about how excited her friends would be to see her and that she could share her new things with them. At the airport, she played and interacted with her friends while waiting for the plane. When it was time to go, she gave Baba a big hug and boarded the plane waving with a smile on her face. We are so grateful for this experience and for this ray of sunshine we will now have in our home forever!

Learn how you can host a child this holiday season!

Jayne: Only Four Months to Find Her a Family or She Ages Out