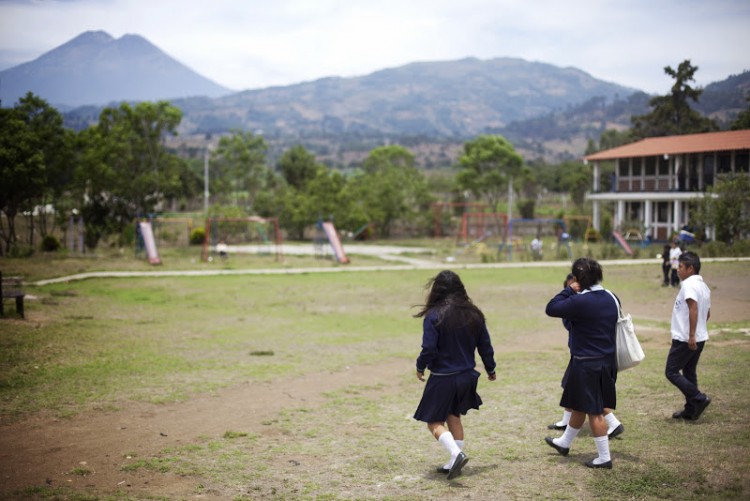 Fr. Tom Belleque has a great love for orphans. When he is not the pastor at St. John's Catholic Church in Vancouver, Washington he spends his time with the orphans of Nuestros Pequenos Hermanos, an organization that operates orphanages in Mexico, Central and South America, and the Caribbean.

The word ‘orphan’ in context is a lonely word. Fr. Tom will be the first to argue this point. His thoughts are drawn to one special ‘orphan’ whose world was far from lonely and, in fact, filled with unconditional love until her final breath.

A few years ago Fr. Tom was in Mexico celebrating the Mass of the Three Kings when he got word that Maria Eugenia, a teenager in the Guatemala home (Casa San Andres) had taken a turn for the worse. She had been battling leukemia. He got on the next possible flight to be with Maria Eugenia and the children of the orphanage. One of their ‘family’ was dying and he needed to be with the children at the NPH home. Throughout these somber days he became inspired with the dedication of the children to their ‘sister’ Maria Eugenia.

“A few times a day a van load of kids would take the 1 1/2 hour trip to Guatemala City to donate blood. In Guatemala there is no blood bank, so you have to provide blood for your loved one.”

Fr. Tom spent time in the hospital at her bedside as well.

“When I asked her what message I could take back to the children she said, ‘Tell them to pray for me and that I want to come home (to the NPH home).’ She died within the week.”

“Since you have to bury within 24 hours we received her body about 7 p.m. that evening. The kids held an all night vigil to be at her side. 30 to 40 kids all through the night each took an hour to be with her. I developed a little prayer service for part of that hour. Because death so often brings to mind losses we have experienced, I asked the children who else is in heaven with Maria Eugenia. I wasn’t prepared to hear the litany of deaths these young children had experienced, ‘my mother, my father, my brother, my sister, my aunt, my uncle, my grandmother, my grandfather . . .’ The list seemed endless.

“I thought about the fact that for most of the kids in my parish, if I asked that question, I would hear more about their pets that had died than close members of their families. I believe it is because these kids have experienced so much loss in their short lives, it enables them to be far more compassionate at a time of loss and mourning."

“I also remember little Kevin mentioning during our prayer how happy Maria Eugenia must be. When I asked him why, he responded, ‘Well she only had two wishes – that we pray for her and that she could come home. Here she is home with us and we haven’t stopped praying with her since she got here.’ Out of the mouths of babes!”

“We celebrated the funeral then carried her body to the cemetery. I remember how proud I was of the kids as we marched through town carrying Maria Eugenia’s body. The kids were so devout and so respectful. After our brief ceremony at the graveside I asked which kids also had family members buried in that cemetery. Several hands shot up and I spent the rest of the afternoon going to each grave, saying a prayer and asking the children to tell me about their loved ones. It was a very humbling and beautiful experience as we honored those who have gone before us.”

In the final moments of Maria Eugenia’s short life, she was surrounded by her ‘family’. They were not related through blood. This was a ‘family’ of children bonded through similar losses in life. Children who understood that no one, orphan or otherwise, should be lonely, nor should they be void of love. Most importantly these are children who understood that no child should ever face death alone.

To Fr. Tom Belleque, the children of Nuestros Pequenos Hermanos are his heroes.

To learn more about Nuestros Pequenos Hermanos go to www.nph.org

Nuestros Pequenos Hermanos houses around 3,300-orphaned children throughout Mexico and Central America. The children are not adoptable. That is not the philosophy of NPH as mentioned on their website:

“The children who find their way to NPH have been orphaned, abused, shuffled from one family member to another. They are seeking love and security, a place to call home. When they come into the care of NPH, they are told they will never be asked to leave. The children grow and learn their culture and language and become contributing citizens in their own countries. Several children arrive with brothers and sisters; it is the priority of NPH to keep the families together.”

Many of the children of NPH are, however, available for sponsorship.

Adopting Our Son While Living in Japan

5 Questions To Ask Yourself When You’re Thinking About Adoption