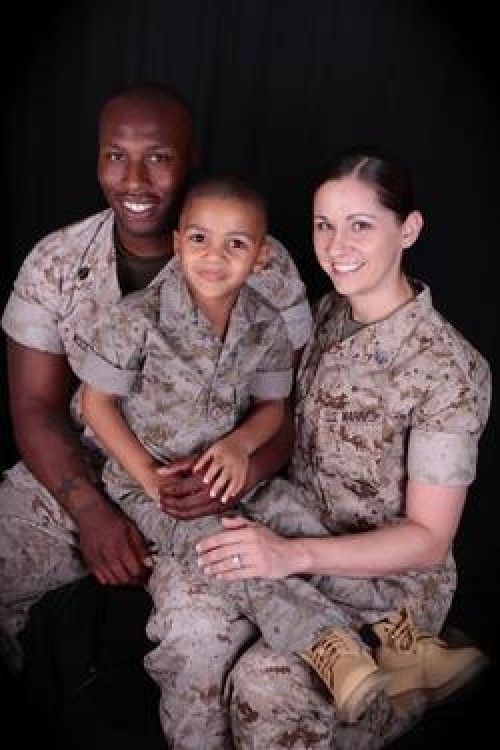 I always wanted to adopt but was never able to. I was a single 24 year-old female serving in the United States Marine Corps and adoption is expensive. I got by but let’s face it, I was no Angelina Jolie. I didn’t make the movie star paycheck and with the hours I worked, child care costs could pay the rent and then some. Who was going to give me a child? I never stopped wanting to adopt, just always assumed it was something unattainable for me.

I was stationed at Parris Island, SC, as a Drill Instructor. There I met my husband, Joey, who is also an active duty Marine and Drill Instructor. We fell in love and talked of a family with 2 or 3 kids. One night while the discussion was open I decided to take my chances and ask what he thought about adoption. I expected a “yeah right” or simply “no” but to my surprise he told me after we have one biological child we can adopt as many as your heart desires. I think I fell head over heels that night!

We unexpectedly discovered we were pregnant early on in our relationship, but we suffered a devastating loss as our son died just before he was delivered in the hospital due to a birth defect. A couple years later during our move to Okinawa, Japan, we had a miscarriage. The second one was another blow to the heart. I really didn’t think I could go through the heartache again. When we finally had the “baby” talk again, I brought up adoption. After two losses we agreed maybe this is what we were meant to do, so we decided to look into adoption. The problem was we didn’t know where to start, not to mention we were living in Japan. We are both active duty military so I thought the odds of anyone letting us adopt were slim to none. By word of mouth we heard about a workshop being put on by Dr. Carol Albers of Adopt-Abroad Inc. on base. Talk about luck!

My husband was in Australia for training so he couldn’t attend. He warned me not to get excited as he was far away and we were just looking for information, and learning how to start the process.

I attended this workshop in August of 2010. Dr. Albers gave a lot of great information as did some other people who attended and had adopted or were in the process. They tend to show random pictures of children from different countries so you have an idea of what they look like. As she was scrolling through, one child stuck in my head through the whole presentation. I didn’t know who he was, where he was from or even his background story or if he was available for adoption, but I just couldn’t stop thinking about him. After Dr Albers was done with her presentation I decided to ask about the little boy. He turned out to be a 3 year old little boy who was available for adoption from Morocco. I asked if she could send me pictures so I could show them to my husband.

Now came the hard part, I told Joey I only went for information and wouldn’t get too excited yet but here I am with a picture of a child and so excited I could scream. How was I going to tell him? He only called once a week from Australia so I had to fit it in without making him mad. I told him the situation and sent him the pictures. He asked some questions and inevitably said, “Let’s get started.”

We were not home study ready, we hadn’t even started — so we had to act quick. I let Dr. Albers know we were interested and ready to get started. Then came the hard part, getting all the documents together: marriage certificates, birth certificates, background checks, FBI clearances and on and on… Living in Japan made it harder because the mail can take twice as long during the holiday season to military bases and we ended up smack dab in the middle of it all. We struggled financially, we knew it was expensive but who knew it was “personal loan” expensive. We weren’t prepared so we we had to really cut back. Worse than that, I had a picture of a 3 year old boy that I called my son, but had never met and couldn’t bring home with me. It was difficult wishing he was with me. Once all the documents were turned in it was just a waiting game. There was nothing we could do but wait for approval. After months had passed in June 2011, we got word that everything had finally been approved and we could travel to Morocco for the final process. We rushed to submit leave and get approval for travel to Africa from the military. Plane tickets were overly priced and hotels were going to cost us a fortune but we didn’t care, we were finally going to get our son!!

We arrived in Morocco and met with our translator/driver. He helped us get into our hotel and settled. The following Monday we were off to the orphanage to meet our son for the first time. Normally you would make two visits but it was difficult for us both to get that much time off so we decided one trip would be fine. As we sat in the room waiting I was nervous yet overjoyed. How would he react to us? As my thoughts started running away with me, he walked in. He recognized me from my pictures and instantly ran up and gave me a hug and said, “Momma”. My heart melted.

After years of disappointment and devastation I finally realized things really do happen for a reason. I was meant to be his Momma. He then went to Joey and sat on his lap giving a high five and a thumbs up. He called him Baba (which means dad). I instantly fell in love. We continued to visit him throughout the week in between court visits and appointments until that following Monday when the adoption was approved through Morocco and we were able to take him to the apartment we were staying in.

On the day we left it was amazing. He was so excited and from here on out everything was a first for him. First trip to the grocery store, first dinner with our new family, and once we finally left, his first plane ride, and first home! When we brought him home it was so funny to watch him in his room. He was so excited he didn’t know which way to turn. We thought the language barrier would be difficult but it isn’t at all. He’s learning quickly and we use a lot of sign language. We also learned Moroccan Arabic on the fly since we were there for a month. We have had such a great time since getting back to Okinawa and our son fits into our family as if he has always been here. We are so happy with our choice to adopt and wouldn’t change it for the world. Who knows, maybe we’ll add an addition to the family someday.

The ABC's of Back to School with FASD

Transitioning the Special Needs Student to Another Class or School