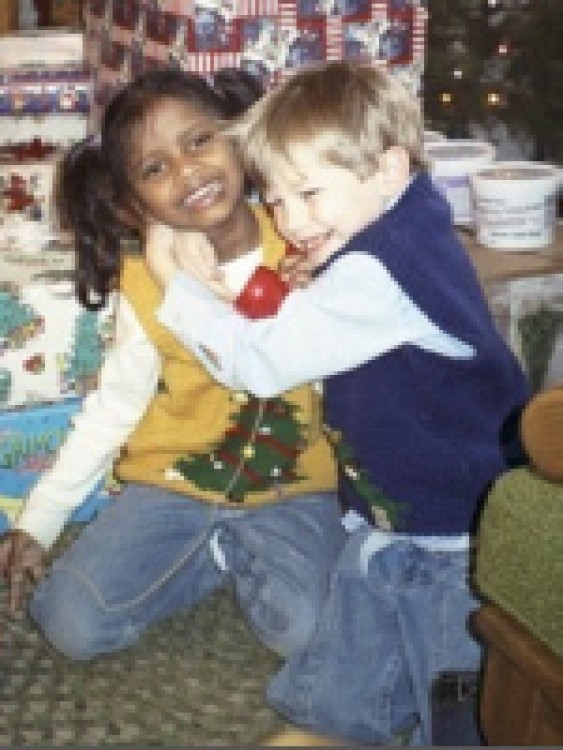 In my alternate life, the one in which my husband and I gave in to our fears and trepidations and chose not to adopt, we have a really clean and beautiful house.  I can close my eyes and imagine it in detail right now. We have two relatively new cars, instead of one older and well used Suburban.  Oh! And that nice nest egg for retirement would be
sitting in the bank growing year by year. Our vacations would include faraway places with exotic names and hundreds of photos on Facebook of our adventures with our one biological child.  When I imagine that other life we almost chose, I can’t help but think: How Boring.

We’d talked about adopting long before we took the plunge. Family and friends didn't understand why we would, "take on such a burden."  They cautioned us to be sure we adopted a baby so that they hadn't had so much "damage" done to them.  When we completed the home-study for a waiting preschooler or toddler they were mystified.
Enter one amazing 3 year old girl with big brown eyes and a smile that melted hearts. Her adjustment was easier than anything we could have dreamed for.   Her special need (hernia) was quickly repaired and she was off to preschool with her big brother.  It's hard to believe that was 10 years ago.  She's a beautiful artistic, athletic, and academic all-star seventh grader now.

It would have been very easy to listen to others and consider ourselves "lucky" to have received such a good and well-adjusted child. Being a part of the adoption community taught us that we were not so special. Many, many children come home and after a necessary adjustment period, blend into their families. We as a family were flexible and preparred, and she as a little girl was willing to open her heart to her new family. It wasn't long before we started to think of adopting again. This time we opened ourselves even more and requested a child older than our daughter and son.

During our research about adopting an older child, we met parents in person and online who had each experienced different adjustments. Some had adopted children who were found to have attachment issues. Others shared more positive experiences. Despite differing advice, we moved forward preparing for the worst and hoping for the best. We were blessed with the referral of a terrific 9 year old.

Two weeks after she arrived home she was settled and begging to go to school with her younger brother and sister.  She was easily communicating with a mixture of English and gestures within a month of arrival. Everyone was shocked to find that she had severe hearing loss and had just been reading lips!  With her late start to school, second language, and hearing impairment, she’s a few years behind her same age peers at school.  Still she fits right in!  We were in the process of getting her first set of hearing aids when we learned of a waiting boy that we had been hoping for.  Finally our birth son wouldn’t be the only boy.

At 5 ½ our second son came home.   He was a whirlwind of energy! We soon learned why the orphanage director told us, "It will be quiet here without him."  After three weeks home he was ready to start preschool.   He started Kindergarten right on time the next year.   Between having attention deficit and being English as a second language, he struggles a bit at school.   However, he thrives in sports and frequently runs over for a quick hug in his daily routine.

It took us four years to discover our next child.   We realized we would be adopting an older special needs child if we could even be approved as a family of six going on seven.  We had looked into Albinism, Dwarfism, and deaf or hard of hearing.  Then we learned of our girl.  At 7 she was the size of a typical 4 year old and she was totally deaf with no language at all.   She’s been home four months and we honestly can't imagine life without her.  She is learning sign language at an amazing rate.   Everyone comments on her happy "infectious laughter."

Where would we be without adoption?  The thought of an empty house terrifies me and we're having so much fun with our crew that I wouldn't have it any other way!  As older waiting special needs kids, they may never have been adopted.  Who knows what their future would have been?   Our family is indeed a win-win situation.  We are totally blessed to have found each other.