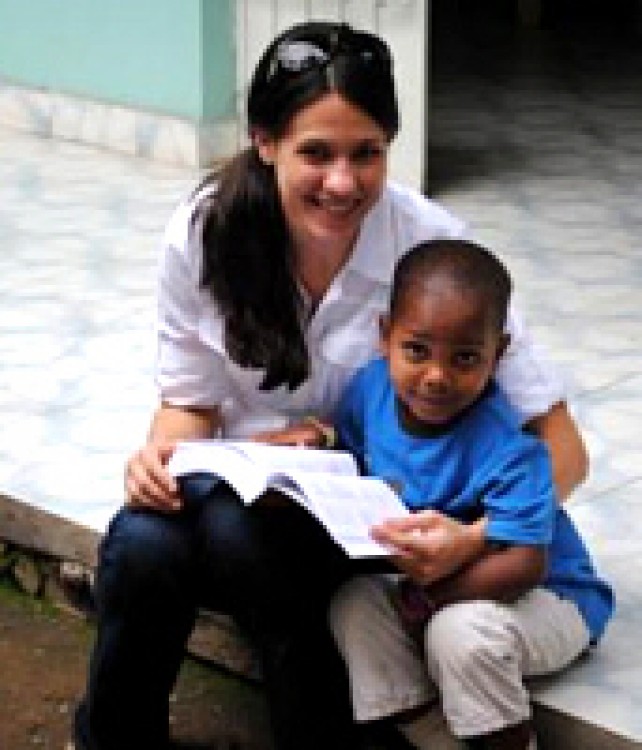 MANAMA, Bahrain – A state of nervousness enthralled Maj. Toby Patterson throughout his two-and-half hour flight July 2011 in anticipation of meeting his son for the first time.

Patterson, currently with Marine Corps Forces Central Command (Forward), was embarking from his duty station in Bahrain; his wife, Lindsay Patterson, from their Sneads Ferry, N.C., home. In the Ethiopian capital city of Addis Ababa, the couple would meet to go see their newly adopted boy, Philip.

Philip, currently seven years old, had spent the last three years in an orphanage after his mother died and his father didn’t have the means to support him and his other siblings. The Pattersons didn't know how the young boy would react to them.

"It was nerve racking, just because you aren't sure how he'll react to you arriving and being introduced to him as his new mom and dad," said Toby, a., native of Marlow, Okla.

After arriving in Addis Ababa, the couple went to see Philip the next day. An employee from their adoption agency drove them eight hours to Philip's orphanage in Awassa, Ethiopia. Finally, after 18 months, countless interviews, and endless paperwork, they met the young boy whom up until then, they had only read about, looked at his photos, and watched videos of him.
"Excited" doesn’t quite encapsulate it, Lindsay recalled.

"It was almost like meeting a celebrity for the first time," added Lindsay, a native of Uvalde, Texas.

The Pattersons had to go through court hearings that same week to get the Ethiopian government's approval to take Philip home.

Their two year journey to adopt a child was almost complete.

The couple desired to have another child shortly after Lindsay gave birth to their first and only biological child, Noah, in February 2008. But after a year of trying and a consultation with a fertility specialist, the couple sought to adopt.

"Actually, Toby and I had decided before we were married that we would eventually adopt," she said.

The Patterson family started their adoption process in early 2010 when they were residing in Australia. The vetting process to determine if the family was suitable for a child would entail receiving letters of recommendation, undergoing background checks, and conducting several in-home interviews with a social worker.

Being a military family who lived in numerous locations, the process was anything but simple for them. Getting criminal and child abuse background checks from every state and country they resided in proved to be time consuming and complicated, they explained. The home study alone took seven months to complete.

Meanwhile, hundreds of miles away, a young Philip waited at his orphanage, unaware of the toil and process his future adoptive parents were experiencing. The international adoption environment is such that infant girls are preferred and the demand for older boys is almost non-existent. According to Lindsay, the seven-year old Philip was considered "old."

"It's a heartbreaking situation," she expressed.

Meanwhile in Awassa, the Amharic speaking Philip attended school in the mornings. At school, he learned some English, the language that he would unknowingly have to become familiar with in his future.

In his spare time, he played soccer. The soccer ball was a way the Pattersons connected with Philip when they met him for the first time. They deduced Philip's favorite pastime from reading his profile provided by the adoption agency.

The Pattersons' first week together as a family with their son was spent playing soccer and looking at pictures. Detailed conversations had to take a backseat to activities and play due to the language barrier.

Philip was initially shy but he warmed up to his new parents quickly, said Lindsay.

Unfortunately, the Pattersons couldn't take their son home just yet; they would have to return months later because they first needed to get him a U.S. visa.

Philip was sad to see his parents leave.

"He didn't seem to understand why he couldn't leave with us right then, and that was very heartbreaking," said Lindsay.

In November, Lindsay returned to Ethiopia to take her son back home to the United States.

Philip took all his new experiences in stride: the escalators, the televisions, the all-you-can-eat buffets. The Pattersons have several friends who have adopted internationally and the kids' common reaction to their new surroundings in America was awe. Not Philip.

Philip is very playful with his younger brother, Noah, who was excited from the first moment he saw his older brother. Noah ran up to Philip and gave him a hug as soon as they walked past airport security upon Lindsay and Philip's arrival from Ethiopia.

In their two-story home, the boys play with their train sets and work on science experiments for Philip who is currently being home-schooled by his mother. Philip teaches his younger brother how to ride a bicycle and play soccer in the neighborhood playground.

“He loves soccer and riding his bike, and he could spend an entire day doing those two activities if we let him,” his mother wrote.

Sometimes they fight over toys or argue over which game to play, "but what kids don't?" asked Lindsay.

The boys often take walks down to the Intracoastal Water Way to look for fish and crabs. They also love to climb the kid's rock wall, she shared.

Philip's "very basic" English has been gradually progressing since he moved to America. He is now able to read some English words and apparently has impressive mathematical skills, boasts his mother.

Philip is part of a home-school co-op that meets weekly; the extroverted boy gets along with the other kids in his home-school wonderfully, said Lindsay. Home-schooling also allows Philip to work at his own pace and focus on subjects such as English and language arts.

"His English has come so far in the last few weeks, and he has no trouble communicating his needs and wants," Lindsay stated.

The Pattersons, being a military family, face the challenges of an often deployed father.

"The boys are sad that their dad is gone, and there have been a few times when the boys would cry because they wanted their dad home," said Lindsay. "At least once a day they ask when dad will be home."

Toby, deployed thousands of miles away from his family, calls them frequently. He calls them in the evening, and due to the time zone difference, it's the afternoon in North Carolina and they're usually eating lunch at home or running errands with their mother.

Two minute conversations are all the boys' attention spans allow, but that's just fine with Toby, he said.

Toby notices improvements in Philip's English skills with each conversation and thanks his wife for her dedicated work.

Lindsay also has support from the community in raising the boys. When Lindsay and Philip arrived from Ethiopia, there were more than 30 friends and neighbors outside their house with welcome signs and gifts waiting for him. The family's church also welcomed Philip with a party where the outgoing boy met and played with a slew of children.

Their adoption agency also introduced them to another family in North Carolina who plans to adopt Philip's friend from the orphanage.

"I'm really excited about the fact that Philip's good friend from Ethiopia will be living within driving distance," said Lindsay.

For the next year, Philip will be home-schooled until the Pattersons feel he is ready to be integrated within the American school system. He has expressed interest in becoming a doctor one day. His chances of achieving his dream in North Carolina are much better than in his native country where less than half of the population age 15 and older can read and write, according to the CIA World Factbook.

HELP FOR THOSE WISHING TO ADOPT

Military families can visit http://www.childwelfare.gov/pubs/f_milita.cfm for specific information.
More information on International Adoption may be found at: http://www.rainbowkids.com

This story was submitted by: http://www.dvidshub.net/

What If We Had Never Adopted?