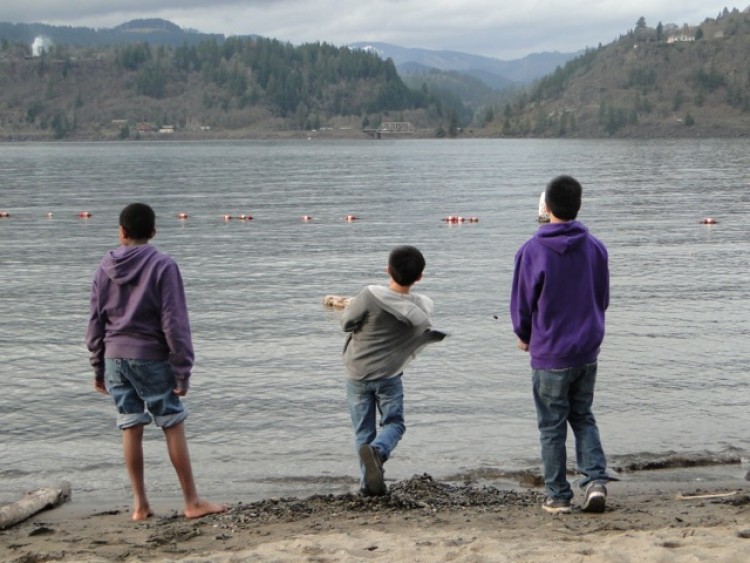 I knew my work at the finishing school wasn’t complete when I came across my People Magazine Special Collectors Issue of William and Kate’s wedding tucked into the magazine rack and on the cover and every subsequent image of the prince thereafter a penis had been sketched in…in Sharpie.

It took all my will power not to march upstairs with my own pink Sharpie and draw breasts over all their Pikachu Pokemon cards. But I didn’t. Head Mistresses of finishing schools do not use Sharpies to draw female body parts on imported trading cards for comeuppance. They may want to, but they don’t. No. Instead they hold their head high while clutching their collectors periodical and excuse themselves from the room and regain composure in private.

I should have figured my life would be destined to be surrounded by boys a little over 18 years ago. We were a happy family of three, my husband Jeff, my daughter Hannah and I. When we found out we were expecting another baby we were all over the moon with excitement.

Unfortunately six months into the pregnancy Hannah and I were involved in a serious car accident in the Willamette Valley. I spent the night in an unfamiliar hospital as the doctors and staff tried to hold back the onset of early labor. Somewhere in the night we were told the baby more than likely wouldn’t make it. We wanted time to name the baby so we asked the gender.

We decided on the name Nichole. The baby did make it and every week after the accident I had to have an ultrasound and every week we were told, “She’s doing great!” I had little baby girl showers. I had a little baby girl’s room ready. I had a closet full of little baby girl clothes. And Hannah. Hannah was sooooo ready to share her life with her baby sister Nichole, that is, until November 6, 1995 when at the end of the Cowboys vs Eagles Monday Night Football game, and as Rodney Peete and Troy Aikman shook hands at the fifty yard line, God gave us Nicholas. To this day I wonder…if Designing Women was still airing on that fateful Monday night… Hannah was fine with a baby brother until she became road kill to his push behind Tonka truck and her hair became tangled in the axles of his windup push cars. That was about the time she started to ask if having a sister named Nichole was still an option. I told her that’s not how it works. Her precious little two year old mind shrugged off my words as she dressed her baby brother in rainbow striped one piece bathing suits, forced him to take on the role of Michael Flatley in her living room version of Lord of the Dance, and began her, to this day, iron fist rule over her baby brother.

Five years later we were preparing to add to our family through adoption. We didn’t have an option of gender in Korea and like with a pregnancy, we were ready for whatever God gave us. Hannah was working overtime to remind God that snips and snails and puppy dog tail Nick wasn’t cutting it as far as a little sister, so she would really appreciate it if he sent a real sister her way. That didn’t happen and on June 17, 2002 our Nick tore through the baggage claim level of Portland International Airport when he spotted his new baby brother. He carefully pulled Sam out of my arms and hugged him as tight as a five year old can and, in truth, has never let go.

About six months after Sam arrived in our home we were a happy family of five. A perfect size. I was handling this mom of three. Hannah was handling this sister of two brothers even better. In December of Sam’s first year we received a flyer from our agency and on the back was a picture of a scared sickly looking six year old boy with a heart condition. I remember to this day looking at the picture and feeling something but then shaking my head and saying, “I can’t be the mom to four kids.” I tossed the flyer in the recycle bin. The next morning I came into the kitchen and my husband was eating his breakfast. On the counter was the flyer with the little boy’s forlorn eyes looking back at me. Jeff stood up, walked over to the flyer, with his finger tapped on the picture, and said, “This is our son.” Nine months later I was in Beijing, China bringing home our Zak. Okay, so now I had gone from being the mom of one beautiful little princess to the mom of a still beautiful princess but also the mom to three equally charming princes. But there is more to the story. There is Ethiopia and there is Noah. By this time I had boys in my heart. I loved my boys. I also knew boys who are orphaned around the world are considered special needs…because they are boys…and although desired within a paternal bloodline within a family in many cultures they are cast off if there is no bloodline to claim. Forgotten.

The sad scary truth, five years ago, ten years ago and today, is that there is a crisis, an overwhelming crisis of orphaned boys needing families around the world and in our own US foster system.

We chose to have a boy as our fifth child. At the time we may have told Hannah otherwise, but we knew what the alternative would be for this little boy from the highlands of Ethiopia and it was far worse than Hannah being the sister to four brothers.

I have learned a thing or two about raising my boys from around the world. They’ll dig a hole to China just because. They’ll climb a tree to touch the sun. They’ll take a stickand make it a gun. They’ll rise to thechallenge of being a gentleman. They’ll escape to their cave for solitude. They’ll snag snakes, corral frogs, and capture caterpillars. They’ll swing from rafters. They’ll build tree forts. They’ll lose hammers, screw drivers, and pliers. They’ll take a Sharpie and draw penises on the royal family collectors issues.

It’s what boys do.

And because I live this everyday, I know without a shadow of doubt what little boys are made of. The Gift of Learning in the Great Rift Valley

Lessons Learned as We Brought Our Son Home