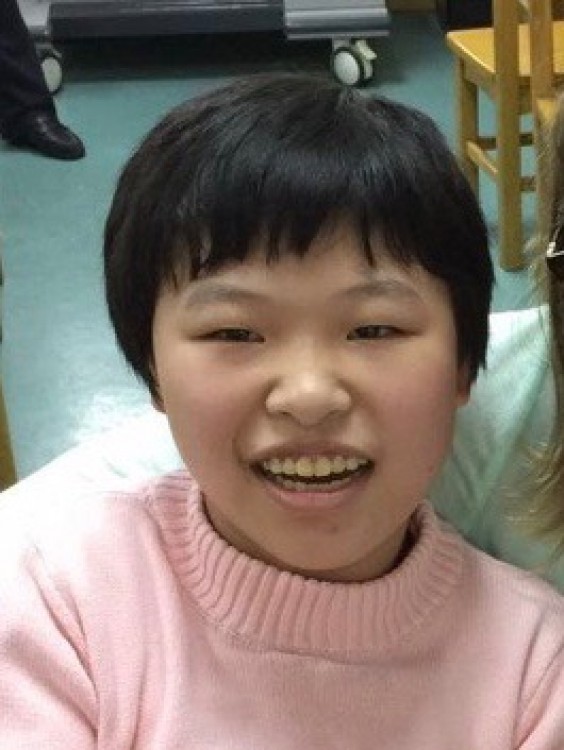 There is a $5400 orphanage fee waiver as well as an agency grant of at least $2000 and a private grant ($1500) available toward the adoption of Mabel.

Please share her story near and far. If now is not the right time for you it might be the perfect time for someone you know to welcome beautiful Mabel into their heart! The agency that holds her file is willing to transfer her file if a prospective family is working with another agency.

She doesn’t like pink and I love that about Mabel ( G-002 BingBing RK# 32031) . Mabel is thirteen-year-old girl with Cerebral Palsy (CP) who lives in the Shanghai Children’s Welfare Institute (CWI). Despite growing up in an institutional setting, she maintains her position on pink, reflecting that she is an individual who holds on firmly to her own thoughts, opinions and ideas.

I gave Mabel her American advocacy name because it sounds a bit like her Chinese name. But, I also like this name for her because of an old saying my mother used to use to scold me. She’d say, “Mabel Mabel, sweet and able, get your elbows off the table!” The words “sweet” and “able” both suit Mabel perfectly. I cannot speak to her table manners, but they are less relevant!

I was first asked to advocate for Mabel nearly two years ago. Her caregivers love her and want her to have a bright future. They know that having a family of her own is best hope of achieving that end. Because of this, I have been able meet and spend time with Mable on two of my visits to Shanghai. She is a cute, warm, and bright-eyed child who conversed, played, and joked with me both times I visited.  She is an independent and determined kid who does not like others to help her do things for her that she can do for herself, such as transfer to and from her wheelchair..

Mabel’s personal history is a painful one, which makes her warm nature, ready smile, and sense of humor all the more astonishing. She was found abandoned on a train in the Shanghai station when she was seven years old. At that time, she was able to walk independently with a walker. However, in the years since, she received two sequential hip surgeries after which her recovery was long and slow, involving months in bed. Now she is not walking and gets around in a wheel chair. My friend and former colleague Lis, a pediatric physical therapist, conducted an assessment of Mabel. I have a full report that I can share with prospective families. Mabel’s goal is to walk again someday.  When I asked Lis for a realistic impression as to the reality of that goal, Lis indicated that – “because she is a fighter” – she at least has a chance of walking with a frame around the home. Mabel is able to care for herself, including toileting independently. Incontinence is not a concern. I asked Lis take off her professional hat for a minute and describe her general impression of Mabel. She said this:

While working in Shanghai, I was asked to do a physical therapy assessment with Mabel. I enjoyed every minute of my time with her. She is initially quite quiet and reserved, but as the time went on she came out of herself and was incredibly friendly in a very (Chinese) respectful way. Very gentle and thoughtful, and cheery. Throughout our time together, we talked about what she can physically do now, and what she would like to do if given the chance.

What struck me was her acceptance of the situation she finds herself in but that she has not given up dreaming of what she would like to do - to be able to walk again. I will never forget the way she kept smiling as I insisted that she try to stand and then take a step even though she was obviously quite nervous at the prospect.

And the way the smile became a grin as she succeeded to do both. Others have written on how well read and bright she is and her potential if given the opportunity, so I won’t repeat them. However, as a physical therapist, what breaks my heart personally is the thought that she has so much physical potential and put that together with her personality and intellect, she has so much potential. She would make a wonderful and delightful addition to a family..

During her visit to Olivia’s Place Mabel had a photoshoot – wearing a pink sweater no less -- with Jamie, another one of my professional colleagues who is both a professional special educator and an amateur photographer. After spending time with Mabel, this is what Jamie had to say about her,

She truly is an amazing girl! She’s one of those kiddos you think about later, as she has such a cheerful disposition, a great heart, and was so determined.

Currently, Mabel’s adoption file is with the Gladney Center for Adoption. They have a $2,000 adoption grant available; however, they are willing to transfer her file if a prospective family is working with another agency. In partnership with Gladney, Dr. Mai Xiong, founder of Adoption Resources China (ARC) assessed a number of children in the Shanghai CWI. After meeting Mabel, Dr. Xiong shared this note with me:

All the interviewers/therapists said by far she was the brightest of all the kids!" Oh, I can't wait for Mabel's family to find their amazing, intelligent, spit-fire of a daughter!! She has so much potential.

Mabel is a shining star within the orphanage as she is bright and helpful.  Her intellectual functioning is fairly typical. She attends school in the institution, and she is an avid reader who has reportedly read some of the Chinese classics, such as Dream of the Red Chamber and Journey to the West. When I brought her some gifts on my second visit, she was not impressed by the cute clothes, but her jaw dropped open upon seeing a stack of new books.

Mabel is a beautiful girl inside and out.  She needs a family who can nurture and help her heart so that she is able to become what God intended. Now that you know a bit more about Mabel, in case you’re wondering favorite color is…it is yellow!