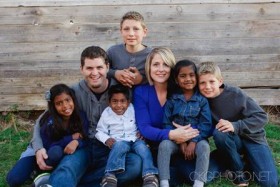 In the W household, Daya’s the girlie-girl. She’s calm, creative and passionate about pink.

Her sister Shaili’s just the opposite: feisty, outgoing, ever-ready with her hilarious sense of humor.

Their younger brother Ajay is a smiling, happy guy. Five minutes with him is a sure-cure for anyone’s bad mood!

These one-of-a-kind kids share a common trait: They joined their family through Dillon International’s India program to find families for children with special needs. After a three-year pause while India implemented changes to its intercountry adoption process, Dillon is again able to accept applications from families.

“We definitely feel adopting children with special needs was the path we were supposed to take,” said Mom Kristi, whose family also includes two biological sons. “Our lives may be different from many families, with therapy and medical appointments, but it’s all so worth it.”

“While in India, we saw a huge need for more families to bring home children with special needs,” said Jessica, whose daughter, Sarah, joined their family two years ago. “There are so many children who need mothers and fathers to love them unconditionally.” “

It was a leap of faith for us to pursue adopting a child with special needs,” recalled Jessica, also the mom of Ethan, who joined their family as a healthy infant in 2008 via adoption from Vietnam. “After almost two years of praying, we learned about our daughter. She had several unknowns about her future and was diagnosed with several special needs. After spending time with doctors, we realized that many of our fears were not realistic. We learned that with therapies, modern medical technology and a loving home, our daughter could live a beautiful life. And she does!”

“Prospective families need to be flexible and prepared for possible process changes and delays,” Roberts said. “Although the process is new and may have its challenges, the most important thing remains unchanged: Children still need families.”

“Special needs adoptions from India do come with unpredictability,” said Amanda, the mom of three children—Varsha, Ananya and Prasun—from India who have special needs. “You can’t know the impact of early neglect. You can never know the impact of a loving family, either. It makes a huge difference. It is a risk with uncountable blessings.”