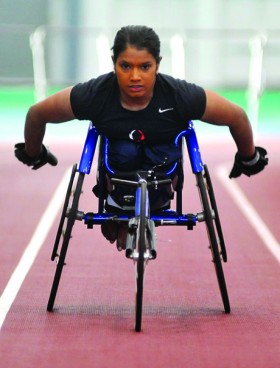 The Voices That Carry

“My family has always been my biggest supporter and my rock, through good and bad times. It’s a bit cliché, but I have my mom to thank for being the young woman I am today." Maggie, WACAP Adoptee

Two threads of high harmony intermingle and wrap around the first and second altos, who’ve picked up the melody. One of the second sopranos is Maggie, Cantigas Women’s Choir member. She’s a 28-year-old Paralympian, graduate student and philanthropist, and singing is one of the things Maggie loves to do. But even when she’s not, the strength of her voice carries across states, countries and competitions, drawing others to a music all her own.

Born in India, Maggie was not adopted until 1987 at age 2 and 1/2. She’d contracted polio as an infant, a disease that paralyzed her from the waist down and kept her in the orphanage longer than other children. “I don’t know much about my time in India,” she reflects, “but I am well aware that I was lucky.” Lucky, she’d say, because WACAP didn’t give up on finding a family for her. That person was her mom, a single parent who saw “Maggie” instead of a child with a physical need that was “too great.” And lucky, too, because eight years later, WACAP hadn’t given up on another little girl from India who’d also contracted polio and who became Maggie’s little sister. “WACAP served us both well,” Maggie adds, “finding us a loving and caring family that has given us the tools we need to succeed far into the future.”

Inside that family recipe for success was self-assurance. “My mother taught me not to let my disability define me, … to try everything. I haven’t looked back since.” That’s meant plenty of moving forward for Maggie … at high speeds. A silver medalist in wheelchair racing, Maggie’s a fierce competitor, traveling to Brazil and China as a member of the U.S. Paralympic teams in 2007 and 2008. Her athletic interest and aptitude began at age 3, and heartened by her mom’s voice, Maggie immersed herself in adaptive sports: tennis, archery, skiing and track. From a young age, she muses, “I was often the only kid in my circle … who had a visible physical disability, but I hardly noticed.”

A competitor not only on the field, this young woman’s determination took her to Texas this summer as a contender for Ms. Wheelchair America. Representing her state as Ms. Wheelchair New Jersey, Maggie encouraged those who are differently-abled to engage in the recreational and competitive activities around them and asked communities to create opportunities for active, healthy living on behalf of the 54 million Americans living with a disability. Maggie’s closing speech was one she and her mom had worked on together, and stirring the judges with the clarity of her voice and message, she left the competition as third runner up. But the brightest moment was not the crowning; it was the gleam in her mom’s eyes. “She was very supportive,” Maggie says. “And I think very proud." “Mama” has a lot to be proud of, though her daughter’s independent spirit often takes her away from home. In 2012, Maggie lived in Kolkata at a home for orphaned girls, many with special needs. Traveling to work in the orphanage was her first time to India since she’d been adopted. During her stay, she became an integral part of the daily operations, making the website as well as dinners, helping with housework and homework. Considering the children and how different life might have been for her, she says, “This home was run at a high caliber, but I saw others where conditions were horrifying. Things played out in such a way that I wound up in the WACAP system.” Every day, she’s thankful for that.

Maggie intends to return to India and volunteer again, but upon returning to the U.S., she’s become more resolute in her commitment to service and civic responsibility. Presently Maggie’s pursing a Master's in Public Administration, working at the Liberty Science Center, a nonprofit, and balancing an internship with the NGO Committee on the Status of Women, a committee in consultative status with the United Nations. Through each of these, she’s gaining momentum and expertise she’ll apply to a career in the nonprofit sector, where her passion lies. “I believe in living life to the fullest. It’s so short and time is precious. Why not take advantage of different opportunities, while giving back to those who paved the way for me to do so?” Maggie asks us all.

Still, with each new knock of opportunity, Maggie answers, knowing she has the support of family, her cornerstone. “Family is what you build everything else around and what you come back to,” she says. They are melody and chorus. They are the voices that shape every song she sings.