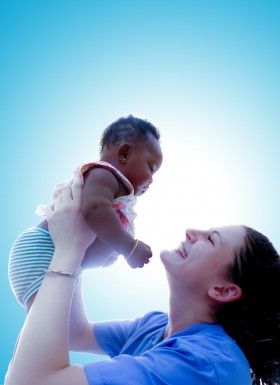 The Tests of Mother Love

Does an adoptive mother deserve a baby shower? Recently a church women’s group had to make a decision. A childless member of the group had adopted a child, and the women were unsure whether to give her the baby shower customarily honoring first-time mothers in the group. According to some of the church ladies, the new mother “doesn’t deserve a baby shower,” since she has not suffered labor pains. Furthermore, to quote some of the ladies, this woman “is acting phony,” because of the adoring looks she keeps giving her new daughter; the new mother has to be “putting on an act, because it’s not as if it’s a child of her own.”

In our society, such attitudes are quite common. Many people believe that an adoptive mother is not “the real mother” and could not possibly love an adopted child as much as a real mother loves her biological child. Thus, it is not unusual for adoptive mothers to be treated with condescension by other mothers or to be told by a pregnant friend that they got their child “the easy way.”

As an adoptive mother, I know certain things the church ladies did not know. Despite the etiquette rule declaring a shower equally appropriate for a newly adopted child, it is time to address the question squarely: does an adoptive mother deserve a baby shower?

The church ladies’ argument for why a biological mother loves her child more than an adoptive mother ever could is based on pain and suffering. Essentially, their argument is that the biological mother, unlike her adoptive counterpart, had to suffer (labor) pain to get her child. It is common for a first-time biological mother to have undergone painful labor. However, it is also quite common for a first-time adoptive mother, who often arrives at adoption after years of infertility treatment, to have undergone painful infertility-related major surgery. Any doctor knows which is harder on a woman’s body, labor or major surgery: the answer is the latter. Thus, if physical suffering is the test of mother love, it is clear that countless adoptive mothers have passed that test.

The Test of the Long Wait

However, the pain test is not the only possible test of love. Another test is how long a person has waited to get what she desires. People tend to love and value most what they have yearned for over a long, long time. In the case of the biological mother, the baby may not have been planned. In fact, many first-time biological mothers would have preferred that their pregnancy had occurred later. For such mothers, the wait for the child is the nine months of pregnancy. However, while there are many unplanned pregnancies, there are no unplanned adoptions. The first-time adoptive mother, who tends to arrive at adoption after years of infertility, typically has waited between four and twelve years for a child. Thus, if time is the test of love, it is clear that adoptive mothers have passed the test.

To find out what someone values, it can be helpful to see where his money goes and for what he is willing to enter into debt. Thus, another possible test of love is how much money a person is willing to spend for her child. A biological mother knows that there will be medical expenses (often covered by insurance) connected with the pregnancy and birth, food and clothing expenses, educational expenses, and other expenses for a child, and she is willing to make the necessary financial sacrifice. However, a woman who adopts a child independently by dealing with someone pregnant ordinarily is expected to pay all of these expenses and more. She reimburses the biological mother for medical expenses without benefit of insurance and is also responsible for any middlemen fees and other fees. Frequently adoption through an adoption agency is even more expensive. A woman who uses an agency typically pays thousands of dollars for the privilege. The adoption-related expenses sometimes exceed $50,000. Thus, if money spent is a test for love, adoptive mothers have clearly passed that test.

The Test of Travel to a Distant Land

Another test of love is how much a woman is willing to do for her child. Some mothers say that they would go to the ends of the earth for their child. Yet many adoptive mothers do just that. Nowadays American women are traveling to China, India, and parts of the former Soviet Union, among other places, to adopt a child. Thus, if willingness to leave one’s home and journey to a distant foreign land is the test of love, it is clear that thousands of adoptive mothers have passed that test.

The typical biological mother got her child through love-making with a man. In contrast, the process of adoption has been compared to serving a criminal sentence to hard labor with a pen. The process requires what seems like a mountain of paper work. The adoptive mother is likely to have engaged in repeated acts of love-making according to a schedule prescribed by the infertility doctor, to have suffered miscarriages, to have undergone major and minor surgeries, to have worked month after month on adoption documents, and to have mourned over her childlessness before finally learning of the child. In short, the adoptive mother did not get her child through love-making; hers came through blood, sweat, and tears.

Does an adoptive mother deserve a baby shower? Now that you know what she commonly has gone through to get a child, I leave it to you to decide.

Renee Henning is an adoptive mother, an attorney, and an author on adoption and other subjects.  Her articles have appeared in books, magazines, newspapers, and newsletters.