The Girl Behind the Face 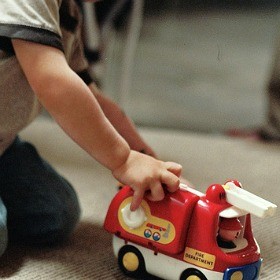 The Little Boy Who Shook Our World

Written by Amanda, Adoptive Mother through Children's Home on 02 Apr 2015

It seemed like such a cop-out, sitting there looking at my smiling little boy.  This crazy little boy who was giggling, and racing around chasing his little sister, and tackling his big “Sissy”, was certainly not the “special needs” child I had spent nine months preparing myself to meet.  He was a pile of happiness, just smiling up at me, with Good Night Moon in his hand, saying “Momma, 'ead it to me?”, not the sickly, developmentally delayed, HIV+ positive child I expected.

It took two years for me to finally say yes after my husband told me he wanted to adopt an HIV+ child. It wasn't that I didn't know in my head that it would be okay.  We had done all the research, and knew that it was now only a chronic illness, that consistent medicine would keep him alive until we were both old.  But in my heart, I was terrified.  What affect would this small child with a big disease have on my life?  I could barely finish a round of antibiotics, how on earth could I consistently be responsible for the daily medication?  And how would I know who to tell, and who not to, and how would I respond when someone responded with hate and fear? And on a more trivial note, what impact would this three year old little have on my sweet little family of four?

When I first laid eyes on him that day in Colombia, I saw a scared, but brave little guy, who wanted us, the whole sweet, family of four (someone loves his sissies).  He started yelling “Papi, don't go!” in Spanish when my husband got up to check on me after only 30 minutes of rolling the little red fire truck back and forth on the floor.

He climbed right into our big hotel bed that first night, snuggled down in with his sisters and my husband, and settled in to read bedtime stories.  He wanted then, and still wants more than anything now, to belong, and he is so happy to be “all together!”.  He doesn't know he is sick.  He does know he doesn't like doctors, but unfortunately he knows the pain of the needle is fast, and he is so very brave, much braver than his sisters.  He knows that he wakes up and goes to bed with his medicine, and firmly reminds me, sometimes even after a long nap.

All the things I was terrified of, the medicine, the doctors, the developmental issues that are common in a lifestory that tough; they all are completely insignificant in our lives.  A doctor's appointment every few weeks to get him stabilized, working out an alarm system on our iPod for the medicine, stashing first aid kits in our cars and around our house, and everywhere else I could think of -- all of these activities were quickly pushed to the side.

More importantly, we weren't parenting a sick child, we were parenting a child who didn't know us, didn't know our rules, our boundaries, or our culture.  We had to learn together what was acceptable, and was not.  Kicking, hitting, biting, spitting, and drinking soda  are out; and sharing, reading books and dance parties in the basement are in.  It did take a while (still working on it in fact) to learn how not throw a fit when Mommy puts cheese on your taco, and when you get woken up by Sissy and not by your favorite person, Daddy. But week by week, we get  better together.  I am learning how not to push his buttons, and he is learning how not to push mine.  And then there was the day a week ago, when I realized that I had just put a dinosaur bandaid and a kiss on a tiny boo-boo, and the thought of the disease didn't even cross my mind.  That was when I realized that the six travel first aid kits might have been a wee bit excessive, and maybe I should have spent the time reading books on how to parent the strong-willed, brilliant child.

Some people don't see the brilliance.  Some people don't see the dimples you could swim in, the sweet heart that loves his “ 'hole famye” and every friend or stranger he has ever met.  Some people don't hear the belly laugh, they only hear HIV, and they get scared.  We thought at first we would tell everyone, because it was your fault if you had a problem with “it.”  That theory was shaken when some of our family struggled, and it went completely out the window when one of the leading orthopedic doctors in our state asked from across the room “Is he contagious”?  That was day three home.  So now we pick and choose who we tell.  Every person in his life daily, knows – there are no secrets.    In my own social circles, I am an advocate.  But we will not make him a poster child to acquaintances and strangers.  When asked if he is safe or if it is carried in saliva, or if he can be hugged, or if he can share a spoon, I gently remind “Please don't have sex, or do drugs with my three year old – you should be perfectly safe then.” The foolishness of the thought and the laugh generally break the awkwardness, and thus far, neither one of us has hit anyone, though I came close with the doctor.  We have found that most people are fine, and in fact tremendously supportive and loving.  And in time, the charm of my son seems to sweep away the concern.