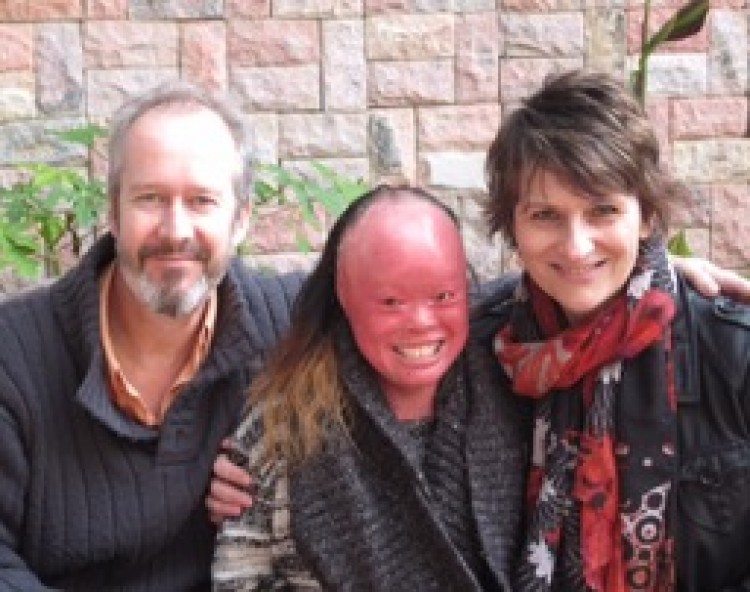 We never intended to adopt a child let alone one with a life threatening skin disorder.

I’m German and my husband is British. Our daughter, Mui, arrived in our lives quite by chance in 1994. She was one-and-a-half-year-old and had been abandoned at birth by her Hong Kong Chinese parents.

When we met her, we were saving to emigrate to Australia before starting a birth family and it was to help others, in the meantime, that we decided to do some volunteer work as weekend fostering parents preparing local Hong Kong Chinese children for overseas adoption.

Every couple of days, I began spending a few hours with Mui in the hospital were she lived in order to build a bond with her. However, she had so many trust issues it took over six months before she could come home with us.

At the beginning of each hospital visit she would scream, rip off her skin and tear out her hair at the very sight of me. There would be blood everywhere. And it got progressively worse, lasting up to 40 minutes at a time. Yet, once she stopped crying, she was inseparable from me for the remainder of each visit. I was filled with self-doubt as to whether I was doing more harm than good by visiting, until my husband, Rog, and I figured out that Mui was expressing her anger that I had left at the end of each previous visit – an indicator of her attachment disorder

After months of visits spent gaining her trust and having fun together, along with proving to hospital staff that we could cope, Rog and I began having Mui home for weekend visits. I was so utterly proud of her, and Rog is in no doubt that my enthusiasm rubbed off on Mui. She threw herself into everything such as learning to speak English – not easy when her lips would not press together until she was five. My determination to be there for Mui is down to my background growing up in Germany. At times my past was dark and I do not have the patience to revisit it for long. At the age of 19, I suffered a nervous breakdown because of what I experienced. However all that happened then strengthened my resolve to be of help to people in need. It gave me the strength to deal with Mui’s months of bloody rejection early on and her years of health issues.

When Mui was moved from the hospital to an institution that was entirely inappropriate for her, we stepped forward to adopt her.

Because information was scarce and the Internet was in its infancy, we only learned of the severity of Mui’s condition little by little. Her skin would split open constantly and she got repeated skin infections. Doctors told us bluntly that she was not expected to live. Many times we rushed to hospital with Rog driving and me with an unconscious Mui in my lap. It was only when she was about 12 that we began to think she might have a future. We believe she is the fourth oldest survivor in the world with Harlequin Ichthyosis.

Though our daughter is Hong Kong Chinese we live in Hong Kong, so raising her with an awareness of her cultural heritage was straightforward though not at all easy. Because, Mui associated her heritage with the institution that she’d been hidden away in and feared she might be returned to. We constantly reminded her of her heritage and her culture. Only now at 22 is she beginning to be more open to accepting this heritage.

Raising our daughter has, at times, been a harrowing and exhausting roller coaster ride due to her health – a period during which we could plan nothing. And yet for us it was normal, so we got on with our daily lives, and did our best to give Mui a normal, happy childhood. We’ve never hidden her away as some people suggested. Instead, we’ve taken her with us everywhere. In the early years I would push her forward to say hello to people and I made sure she interacted with people.

In the street, people would scream, run away, hide their children’s eyes, invite friends to come stare and even follow us. Once an elderly woman spat in my face and, while screaming in Chinese.  Rog and I always tried to control our reactions and walk on, at such moments, because we didn’t want Mui to feel frightened or let other people ruin her day.

Introducing Mui to people wherever we went and explaining her condition has helped break down the invisible barriers that people with a visible difference face. It also helped her to be embraced by the Hong Kong Chinese community. As a result lots of people have grown to love Mui and that’s helped her grow in confidence.

In secondary school Mui was cyberbullied to a point she considered suicide. She went into complete denial of her skin disorder. Ironically she better accepted her heritage, by claiming she looked like any other Chinese girl her age.

Our response to Mui’s cyberbullying has been to write a book to share our story of raising a Hong Kong Chinese daughter with a visible difference.

We do hope our book and Facebook page: The Girl Behind The Face  will lead to helping others.

Adopting a Child with Down Syndrome: Keeping Realistic Expectations and an Open Heart

International Adoption Clinics are a Vital Resource to Adoptive Families