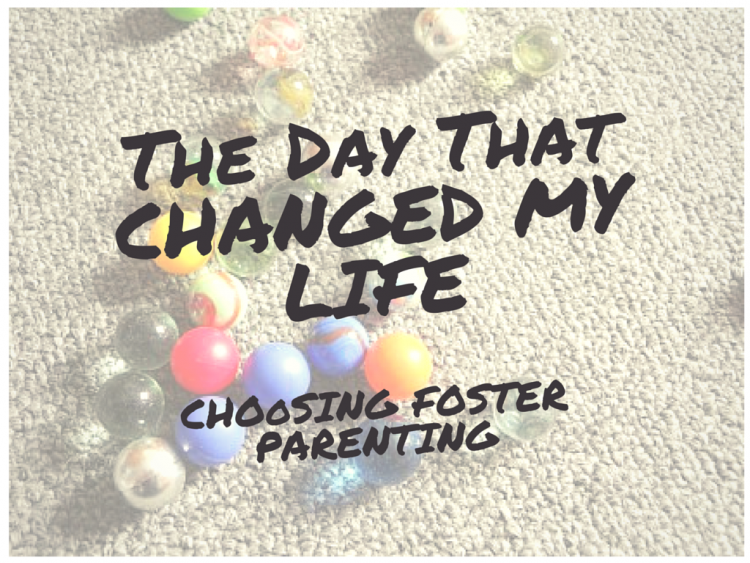 February 3, 1997 was a day that forever changed my life. That was the day my family opened our home and hearts to foster care. It was a colder than average Friday afternoon when I got the call. Two brothers, age 3 and 18 months, were coming “into care.” Would we be able to take them? Without hesitation I said, “YES.”

With nervous anticipation I opened the door that afternoon to two sets of coal black, blood shot eyes looking up at me with pure fear and confusion. I quickly tried to usher them into my “gingerbread” home, filled with toys and the scent of fresh baked cookies wafting in the air. But instead I was met with screams of “Don’t touch me! You’re not my mommy! Don’t touch me!” I began to get flustered. The weeks of resource parent training and books that I had read about foster care never prepared me for this reaction! The worker rattled on about court, antibiotics, phone numbers, blah, blah, while echoes of “Don’t touch me, you’re not my mommy. I want my mommy,” rang through my head. Then suddenly she was gone. My own chil- dren were intertwined in my legs chanting “why they crying? We got toys? Are they our new brothers?”

When the sudden realization of what was happening settled upon me, I began to cry. As a tear ran down my cheek, I thought to myself, “I want my mommy.” At that moment something occurred to me, I wasn’t the only one feeling overwhelmed and scared right then. I quickly put aside my fears and moved on to the task at hand.

I popped in a video for my children, which to my surprise, charmed the 18-month-old. He went over to the TV and stood mesmerized by the big purple dinosaur singing and dancing in front of him. Winning over the 3-year-old proved more challenging.

Cautiously, I approached and asked if he wanted to watch TV. He screamed, “NO.” I asked if he wanted something to eat. Again there were screams of “no.” I asked if I could sit by him. His silence was the closest thing to acceptance I had so I seized the opportunity. I slid down next to him on the top stair and just sat. After what seemed like ages, I felt him lean against me. I put my arm around him and began to stroke his head. Within minutes he was asleep.

The next few weeks proved to be as challenging as the first few days. From rigging our seven passenger van to accommodate five car seats and working around food differences to navigating phone calls that sent the 3-year-old into a maddening rage – it was tough! But we were surviving. The children were thriving and a fragile trust was being formed. We had those boys four weeks before they were sent back to their parents. They had come to us sick, dirty and broken. They returned clean, healthy and on the way to being mended and I was mad – no, I was furious. I had gone into foster care with the intention of saving a child. How could I do that when I was only perpetuating the situation? I was giving them false hope. How could they trust me? Wouldn’t they think that I was just sending them back to the deplorable situation they came from?

After much discussion with my husband, we decided to keep our home open and try again. Within days we got the next call. This time a newborn needed care for a week while his mom was incarcerated. That child was followed by a 10-month-old who stayed two months, who was followed by another 10-month- old who stayed three weeks. Each child came into our home with his or her own set of baggage and stayed for varying amounts of time.

It was about six months after our first boys left our home that I received a call from my licensing worker. She told me that the boys had come back into care and the oldest had asked to come back to our home. I was crushed. We had just taken two other children so our home was full. I wouldn’t be able to help them. The worker told me that she wasn’t calling to ask us to take the boys. She was calling us to tell us that the boys had remembered us. She said, “One day you will understand why I called you.”

That night as my mind kept drifting off to her words I had my epiphany. I got into foster care to “save a child.” But what I had done was so much more than that – I had given a child the opportunity to be a child – even if it was only for four weeks. During that short time he was with us he could play, grow, thrive and not have to worry about when he was going to eat again or where he was going to sleep that night or if his mom would come back to get him. That had made enough of an impression on him that he remembered.

Today our home is still a foster home. We have fostered for more than 13 years, taking in more than forty children in that time. Our family has grown from three to seven children. Two weeks ago I received an important phone call. A young man who we had fostered five years ago for a period of two years found my number and called me. We chatted for about 30 minutes. As I was thanking him for calling, I mentioned that he was always welcome in our home and he should come by to visit some time. He quickly replied, “How about tomorrow?” He spent the whole next day with us playing, laughing and reminiscing. As I dropped him off that night at his home, I realized that this is what foster care was really about. Foster care is about making a connection – a connection intended to last a lifetime.