To Wake Up Loved 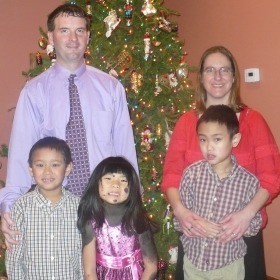 Written by Kim, Adoptive Mother through Children's Home on 28 Jan 2015

“Read the file before looking at the pictures,” I urged my husband as I shared a referral with him.  This is common advice in adoption: don’t fall in love with an adorable face before you know the child’s background and needs.  This situation, however, was different.  I feared that the pictures showing the extent of her birthmarks would lead my husband to believe that she was not the right child for us.  On paper, Wu Tongen was a perfect match for us: A girl nearly four years old, two years younger than our youngest son.  She had been with the same foster family since she was a couple months old.  Her physical and cognitive development were normal and she was described as a sweet and strong child.

This was our third adoption with Children’s Home Society. Each of our boys had also been considered a “special needs” adoption in their own ways.  We felt there was little we couldn’t handle (or at least I did). So with that belief, and a quick google search, I had months earlier checked the “yes” box next to “nevi” on the list of special needs we would consider.  I even specifically requested to view Tongen’s file from China’s shared list. In reality, we knew very little about giant congenital nevi, also referred to as congenital melanocytic nevus (CMN). More thorough research taught us that CMN occur once in every 500,000 births. Medically, individuals with CMN have a higher risk of skin cancer and possible neurological problems; these were manageable in our book.  The concern we spent the next weeks discussing was her emotional well-being.  This was not “just” a birthmark or a mole.  Her nevus covered much of her neck and torso, with hundreds of satellites on her face, legs and arms.  Bullying and self-esteem problems were among our top fears.

We held onto her file for nearly two weeks.  I was unable to say no; my husband not yet ready to say yes.  I’m not sure what information made the final decision for him but we accepted her referral just days before her fourth birthday. We were realistic that there would be challenges, some the same as other kids, some unique to her situation.  I kept coming back to the fact that these challenges were going to be part of her life—with or without us.  I was convinced that there was no other family who was more prepared to love her and help her through these times then we were.

Exactly a year after meeting Teagen Wu (the new name we've chosen for our daughter) in China, we travelled as a family of five from Minnesota to Chicago to see a surgeon known world-wide for nevus removal. After discussing options such as tissue expanders and skin grafts, we opted at this time to just do multi-stage excision of some of the nevi most visible on her face.  I know I will miss these spots.  Likely we will hold off on more complex removal until she is old enough to be part of the decision.  For now, we are focusing on teaching her that she truly is beautiful—both inside and out.

Read more about this special need