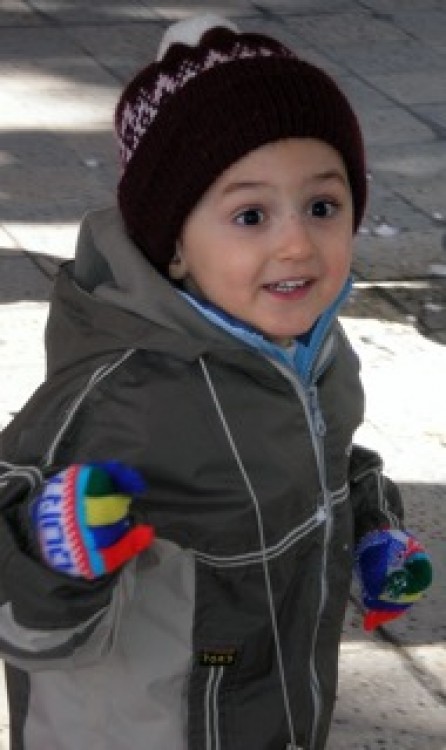 We tried for several years to get pregnant, slowly letting go of the certainty that it would happen and coming to a place of acceptance that for us, building a family the 'natural way' wasn't going to happen.

Adoption was something we touched upon lightly in conversation, but we were trying to have children of "our own", and  time kept slipping by until finally it seemed that adoption was a thing of the past; we were just not talking about it anymore.

Several years into our marriage, we experienced a day of interacting and playing with children in our extended-family. As we drove home, my husband broke the silence by asking, "Why did we stop talking about adopting a child?" And that is how our story began.

I never wanted to force my husband into doing something he was not sure about, but the moment I heard his comment I knew I had the green light. The very next day, I went to the immigration website and checked all the accredited adoption agencies in Michigan.   We knew we wanted to adopt from Eastern Europe, since both my husband and I were born there, and that had a lot to do with our final decision of which agency to go with. After going back and forth for a while, we got it down to two adoption agencies, one was doing adoptions from Bulgaria and the other one was doing adoptions from Ukraine.  We decided to go with Ukraine, so we contacted Hands Across the Water to meet and find out more details.

Going in, we thought we had it all figured out.

We knew that we wanted to adopt from Ukraine, the sex and age of the child, and how many medical conditions we were going to accept. We met with the International Programs Coordinator, Julie, from our agency, and learned that when adopting internationally, families need to 'try on' and consider many different scenarios.

Such as, contrary to what we believed, there were many more boys available for adoption than girls.

We had set the uppper age limit of the child we wished to adopt at age 3 years.  After speaking with our agency, and examing our hearts (really, what makes a child 3 or 4? A day, a month?) we raised our upper preffered age to 4 years.

One of the first things we heard from our agency was this: Adoption is a Journey.  Invest your heart, stretch as much as you can, and know that you will be united with the child that you are meant to have.  I didn't really believe it.

What I did believe was this: If we did everything right, then nothing could go wrong.

Ours is not an easy story, but it is one that I share because in the end, Julie was right.  We needed to be open, to listen to our hearts, and to persevere.

After all the paperwork was done, and a year and a half of waiting, we traveled to Ukraine and met the child we were being matched with. We were not prepared for the very advanced medical needs that the children we saw had.  It was a very hard decision to make, but knowing what you can handle is very important. We knew that this was not our child.

When we came home three weeks later, we knew any chance of adopting from Ukraine was impossible at that point.

We could have shut the door to having children then, but instead we decided to step back and take a breath.  We chose to set a time limit: would grieve for 6 months, and then re-evaluate.

Four weeks later, we got the call that would change our course.  Our agency had become licensed in Bulgaria and had received information on a little boy with medical special needs different than what we had indicated, but they thought he might be perfect for us.

We were reluctant. Did we want to put ourselves through another heartbreak?

Videos, medicals, and photos were provided. We spoke with families parenting children with similar medical conditions, and asked many questions.

Our agency required us to contact a doctor to discuss this child's medical history and what his needs might be.

The doctor helped answer some of our concerns, but also she let us know that some of his history was not clear and we needed to ask more questions.  The people that worked with him at the orphanage clarified a lot of our questions.  Actually, the process in Bulgaria was pretty straight forward.  There were no surprises when it came to finances, adoption procedures, or medical records.

Our US Adoption Medical Specialist prepared us for what could have been the worst case scenario, which was that he was so behind for his age, and that he might have brain damage. We balanced all of the information and advice, the videos, and professional input, and made our choice: We were ready to pursue the adoption of this 3-year-old boy.

I will never forget that first day with him.

Here we were, waiting in this office half way across the world, full of trepidation.  In bursts this bundle of energy, full of curiousity.  The first thing he did was to push every button available in the room.  He had to understand how everything worked.  He was cautious, but also eager to interact.

The next day, we were allowed to take him outside.  Going outside isn't common in his institution, so when he heard he was going out, he was so excited he put his jacket on upside down. He was all smiles and exuberance.

Each day we visited him, we brought one small gift.  He loved his books and toys. In total, we visited twice daily for 5 days. In the end, all he wanted was to be thrown up in the air and to land safely in the arms of my husband, wear his new watch, and have us chase after him as he laughed in delight.

When we left Bulgaria, we had no more doubts about finalizing the adoption.  Every day we were with him, we smiled.

I deeply hoped that this child of our hearts, this precious boy that we had grown to love, would be home  with us for his 4th birthday.  Just three weeks prior to that big event, our son came home, forever.

Three years later, he is thriving.  While he was very behind, the amount of progress he has made is unbelievable and, of course, there is no sign of brain damage.

In the end, Julie made a believer out of us: You will be united with the child that you are meant to have.  We are living proof of that.  He makes our days brighter and we are lucky to be his parents.

Hands Across The Water Inc

Hands Across The Water is a non-profit child placing agency, licensed in the state of Michigan. Our programs include infant domestic, waiting child domestic, international programs, and waiting child international. A majority of our staff has been touched by adoption in some way and are passionate about building families by adoption. Our agency is located in Michigan where we can provide home study and placement services. We also have a Family Liasion located in the state of Georgia who will work with our Georgia families directly once the home study is complete.
Hands Across The Water can also provide placement services to families living in all states and to US citizens residing abroad. Hands Across The Water also provides adoptive parenting education through monthly classes on various topics, monthly support group for waiting families, monthly support group for families adopting (or have adopted) an older child, and a lending library for HATW families. Please contact our staff for information on these events and our various adoption programs. We've been there, now we're there for you!