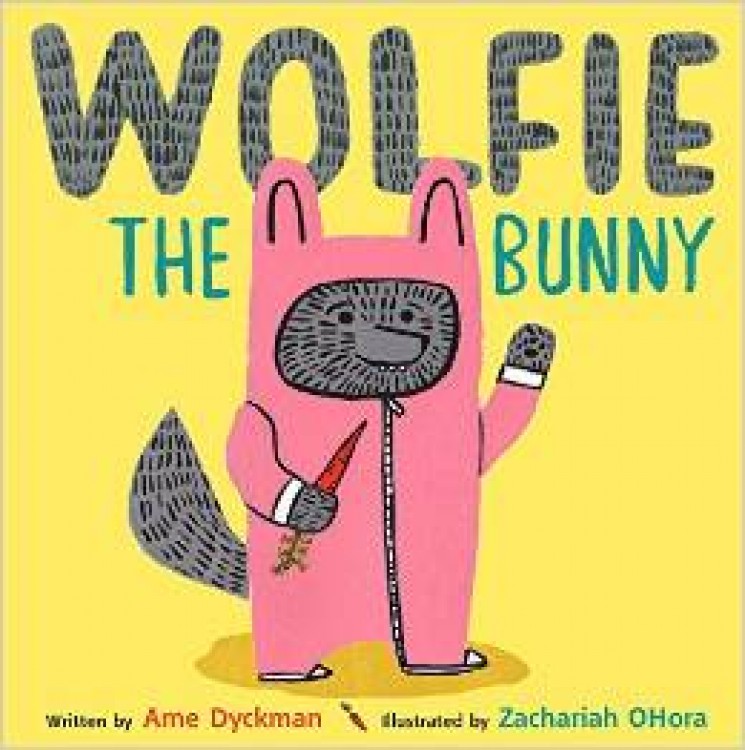 I'm always on the lookout for picture books about adoption and transracial families. Sometimes that means digging below the obvious choices -- many of which are overly sentimental, to be totally honest -- and seeking out titles that might not be instantly recognizable as fitting the bill for us. Fortunately that search paid off with our most recent read, and Sprout's current favorite, Wolfie the Bunny.

To tell the truth, we've been looking forward to Wolfie the Bunny for quite some time, as we were huge fans of author Ame Dyckman's first book Boy + Bot, a can't-miss choice if your kiddos love robots. Also we already knew illustrator Zachariah Ohora from No Fits, Nilson, about a gorilla with a real penchant for temper tantrums (super fun). So any project with the combined talents of these two wunderkinds was automatically on our TBR list. And luckily, Wolfie the Bunny not only lived up to our expectations, it far exceeded them - I had no idea that Wolfie was going to be such a great choice for its themes about sibling relationships, adoption, and families that don't exactly match.

The real star of Wolfie the Bunny isn't the title character, but his big sister Dot. Dot and her family, a respectable rabbit clan, are stunned when a baby wolf ends up on their doorstep. Dot's parents are totally enchanted from the get-go, but Dot's not convinced. Hello, he's a WOLF! Yet try as she might, Dot can't get anyone to listen to her concerns. Then one day, there's a showdown - will Dot's worst fears be realized??!?

I won't spoil the ending for you, but let's just say that this buck-toothed wolf baby is not the big villain of the story. Though they are rabbit and wolf, the relationship between these two kiddos mirrors any sibling relationship that humans have ever had. (Of course, being that he's an only, that dynamic mostly went over Sprout's head, but Hubs and I found it all-too-familiar.) As with Boy + Bot, Dyckman was clearly in her element writing Wolfie, because the humor throughout is totally spot-on. And bless the editorial hand that matched up this author and illustrator - Ohora's style matches Dyckman's lively narrative like the two were born to create picture books. So many great touches here, particularly the character development of the lovably-bescowled Dot. (Confession: she's my super-fave.)

If you're looking for a sibling story with just a bit of bite, look no further than Wolfie the Bunny. This family may not match on the outside, but when it all comes down to it, they're perfectly paired!

Wolfie the Bunny by Ame Dyckman, published by Little, Brown and Company

Mary Kinser is a librarian and lifelong children's book addict.  She is also the proud mama of a little boy whose bookshelf will probably always be too full.   She began her blog, Sprout's Bookshelf, out of the continual efforts to surround her son with books that support him, as part of a transracial family formed through international adoption. RainbowKids is beyond thrilled to have Mary share her expert knowledge and passion of children's books with our RK family so we can all feed into our bulging bookshelf of top notch children's books passion!

The Child You're Supposed to Have

When Do You Tell a Child He Was Adopted?